The long-awaited Ethereum Merge will take place late Wednesday or early Thursday based on the latest estimates. (ryasick/Getty Images)

Cryptocurrency market watchers are eyeing the long-awaited Ethereum Merge this week as the network changes from a proof-of-work (PoW) blockchain to a more energy-efficient proof-of-stake (PoS) system.

The Merge is predicted to reduce Ethereum’s energy consumption by 99.95% – considered to be positive for the network’s sustainability and security. Based on the latest estimates, the changeover will take place late Wednesday or early Thursday.

There’s a lot of speculation among crypto traders as to how it will all play out. The blockchain analytics platform Nansen and data firm Kaiko have published reports on what to watch.

Here are four things about the Merge that the firms are monitoring. 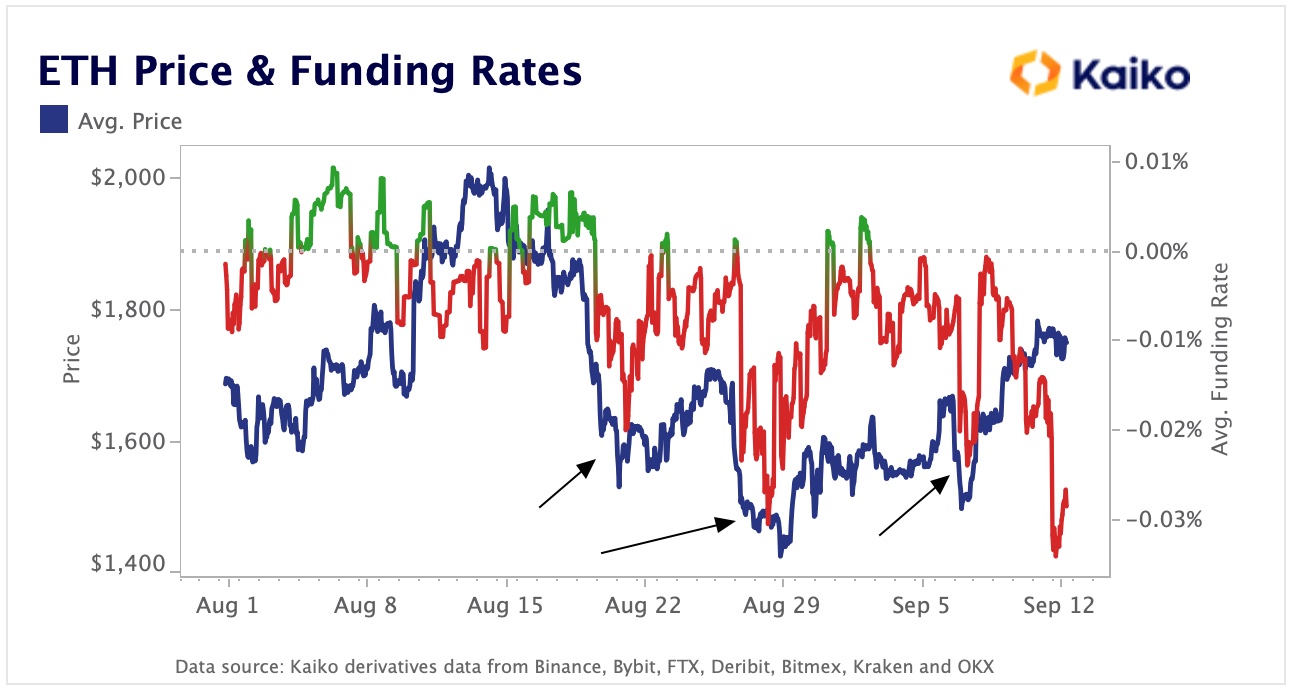 Kaiko chart shows while each time funding dropped sharply over the past month, ETH prices rallied off the lows and ETH funding rates moved close or into positive territory. (Kaiko)

Funding rates are similar to interest rates – but for traders: It’s what they pay for leverage when betting on cryptocurrencies. When they’re negative, generally speaking, it means that there’s more demand from traders to bet on price declines.

As the Merge approaches, Kaiko is keeping tabs on the funding rates in crypto markets.

While bitcoin (BTC) funding rates have recently flipped positive, ether (ETH) funding rates slipped to their most negative since July 2021, according to Kaiko’s research.

The research found that investors are increasingly turning to futures markets over spot markets to readjust their exposure ahead of the Merge, which leaves the market “primed for a potential short squeeze.”

If the Merge goes ahead successfully, one would expect these short futures positions “to be closed out and funding to move back towards positive territory,” which could act as a positive factor for the price of ETH post-Merge, according to Kaiko. 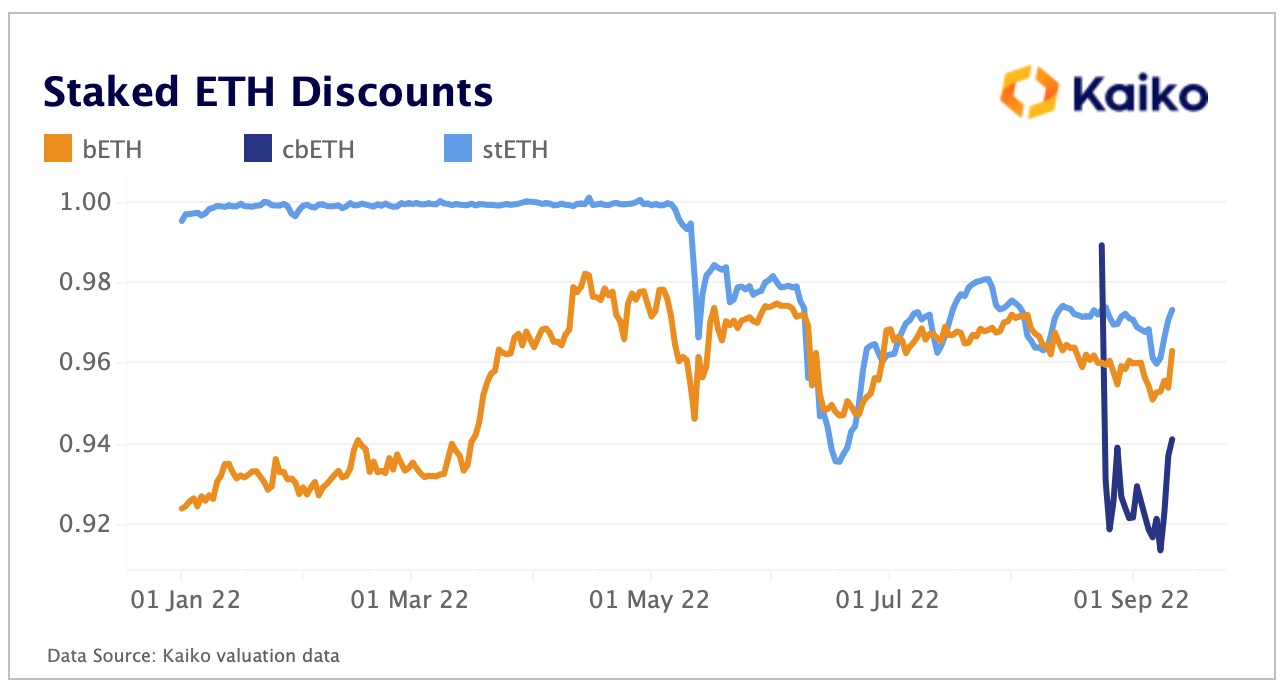 Both firms are looking at staked ether (stETH) – a type of digital token from the Lido protocol that allows traders to get liquidity even when their ether is staked on the Ethereum blockchain – essentially making it locked up for a long period of time.

In theory, the stETH tokens should trade at the same price as the ether tokens they’re supposed to substitute for. In the lead-up to the Merge, though, they have been trading at a discount.

Nansen’s research showed that Lido, a staking service, holds the greatest amount of stETH at 31%, followed by Coinbase, Kraken and Binance with a combined around 30%.

Despite that each token is redeemable sometime post-Merge at a 1:1 ratio, the Kaiko researchers observed a significant discount across the three largest staked ether tokens: stETH from Lido, cbETH from Coinbase and bETH from Binance — reflecting the various risks perceived by investors.

Nansen also highlighted the technology risk of whether The Merge will be properly executed and if the PoS chain will be adopted.

The good news was the improvement in the discounts for stETH and bETH on Sept. 11, according to Kaiko. “Investors might be sufficiently happy with the discount to invest in both tokens, earning both the yield from the staked ETH as well as the price discount once the token is redeemable 1:1.” 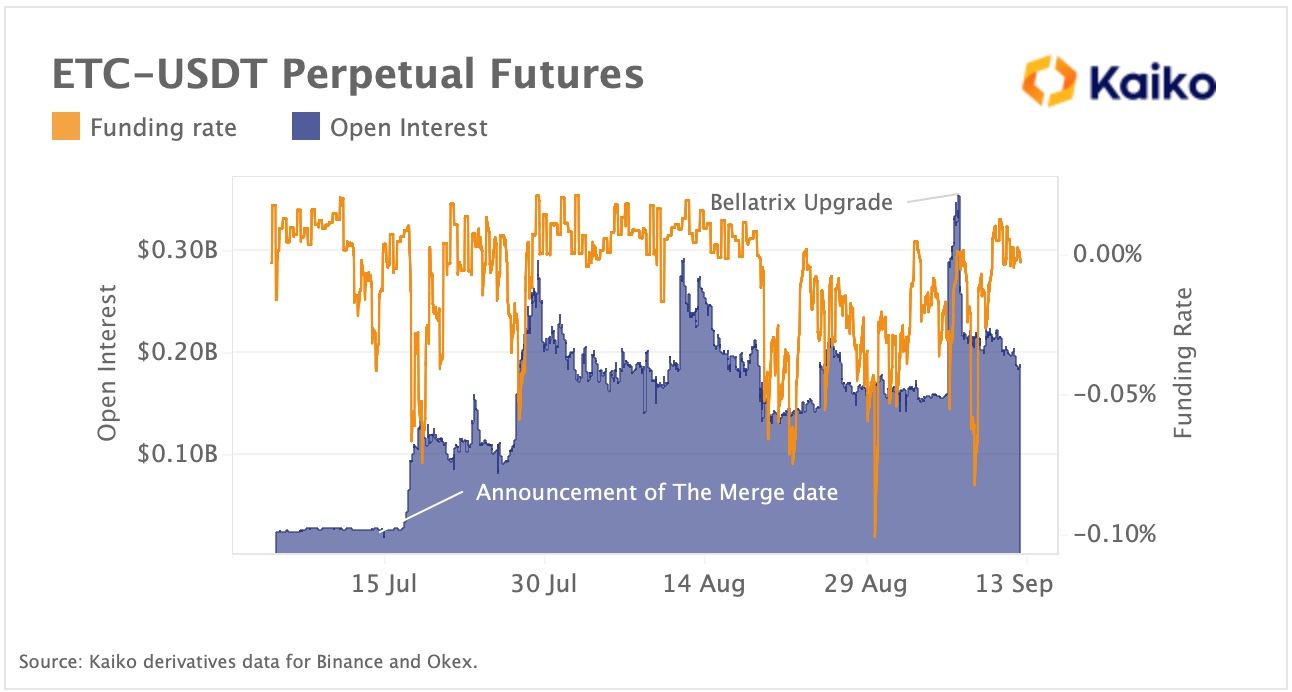 Ethereum Classic, a blockchain similar to Ethereum that’s expected to remain proof-of-work following the Merge, has gained significant traction since July, according to Kaiko.

“The trend will likely continue as last week the second largest Ethereum mining pool, F2Pool, announced it will halt ETH mining in September and transition to Ethereum Classic (ETC) instead,” the report read.

Nansen chart shows ETH millionaires and billionaires – large holders – have consistently been stacking ether since the beginning of this year. (Nansen Query)

Nansen researchers said that ETH millionaires and billionaires – large holders – have consistently been stacking ether since the beginning of this year, seemingly without being fazed by volatile markets.

Yet the ”smart money,” as Nansen describes it – the capital controlled by institutional investors – has started scaling in after a low in mid-June, researchers pointed out. “They are anticipating some positive price action around the Merge,” according to Nansen.

First Mover Asia: DeFi Builders Speak Out. What the Crowd Is Getting Wrong About the Ethereum Merge

What Are Doodles? Everything You Need To Know About the Colorful NFT Project