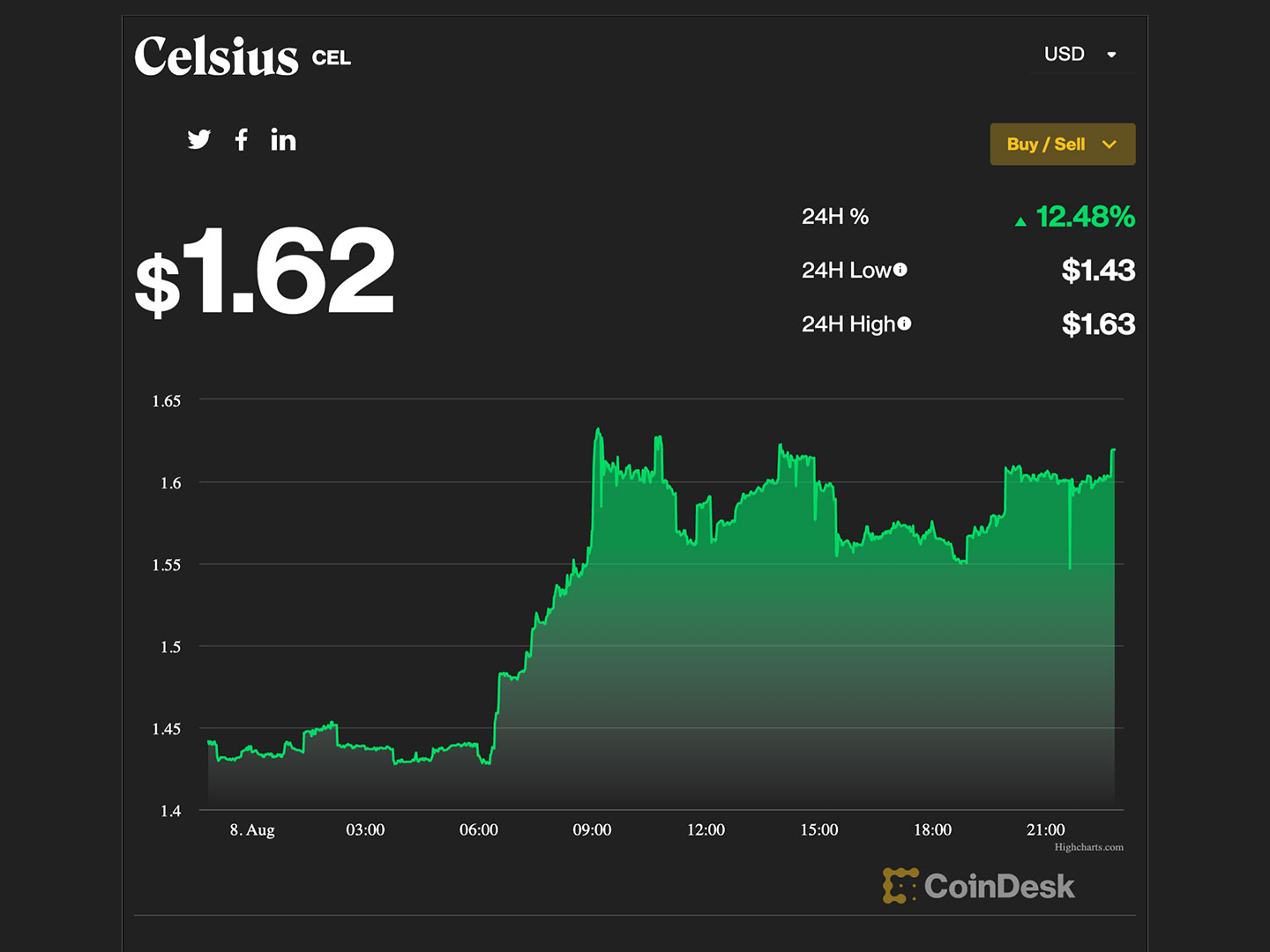 Bankrupt crypto lender Celsius Network’s CEL token jumped to $1.63 on Monday, and is now trading at a higher price than before Celsius encountered financial difficulties and halted user withdrawals.

The CEL token dropped to as low as 15 cents on June 12 when the embattled crypto lender announced that it was halting withdrawals. Its current price marks a tenfold rise in less than two months, and a 300% gain since July 13 when Celsius filed for bankruptcy protection, according to data on crypto intelligence platform Messari.

“It seems that a lot of speculative assets like CEL or even the meme stocks are surging as growth equities are trying to recover,” Brett Sifling, director at Gerber Kawasaki Wealth & Investment Management, told CoinDesk.

A community-driven short squeeze organized on Twitter under the #CELShortSqueeze banner likely added to speculation about the token’s price.

Following Celsius’ troubles, many traders bet on a further drop in CEL’s price by shorting the coin on exchanges (listing sell orders). But a group of people spotted an opportunity for a move similar to last year’s GameStop (GME) short squeeze.

Short squeezes are sudden price spikes of embattled assets that force short sellers to buy back at a higher price to cover their positions. The bankrupt crypto broker Voyager Network’s VGX token offers the latest example of short squeezes.

Freezing Celsius’ transfers meant that a large part of the total supply of CEL tokens are locked on the platform, and only a fraction of the tokens trade on exchanges.

FTX hosts about 4.4 million CEL tokens, more than all other exchanges combined, according to a dashboard on crypto data analytics platform Dune. Meanwhile, the open short positions on the exchange amount to three million tokens, a data compilation shows.

The community attempts to pressure short sellers by buying CEL tokens on FTX, withdrawing the digital currency from the exchange to a private wallet and setting a sell order at a sky-high price (some traders promote a $100 price tag).

“Since the circulating supply is very small, it is technically possible to create a short squeeze, although the impact in the overall market could be very limited and hard to sustain over a longer period of time,” Samir Kerbage, crypto asset manager Hashdex’s chief product and technology officer, told CoinDesk. 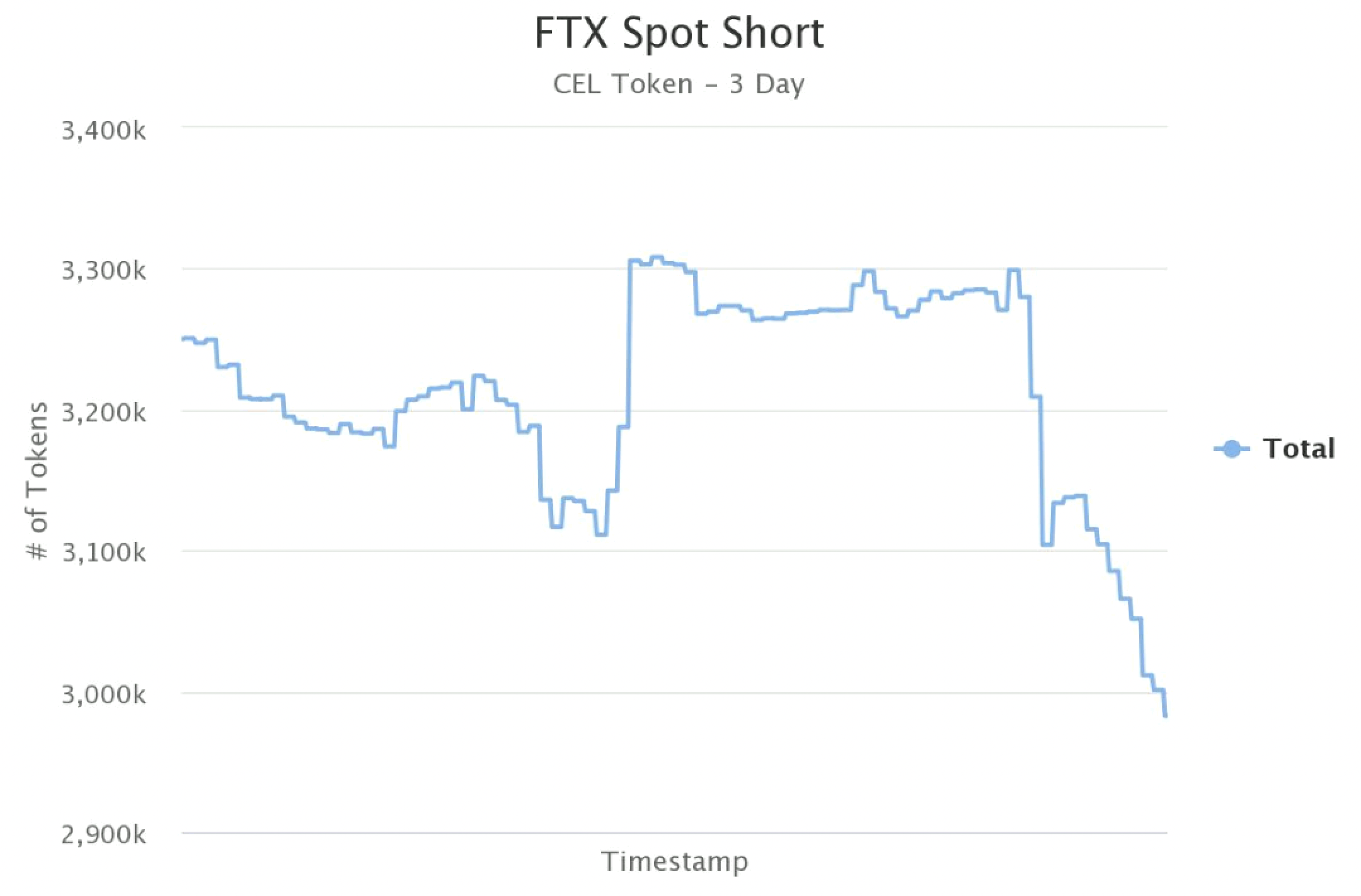 While some analysts are optimistic about CEL’s long-term recovery, Kerbage is skeptical about the coin’s future.

“There’s limited upside for investors trying to create the squeeze other than activism or show support to Celsius, while there’s a big downside: The token can go to zero or Celsius could dump more tokens in the market,” he said.

At ETHSeoul, Ethereum Developers Turn Attention to Privacy and Users

Vitalik Buterin Tweets About Tornado Cash, and Reddit Teams Up with FTX Pay