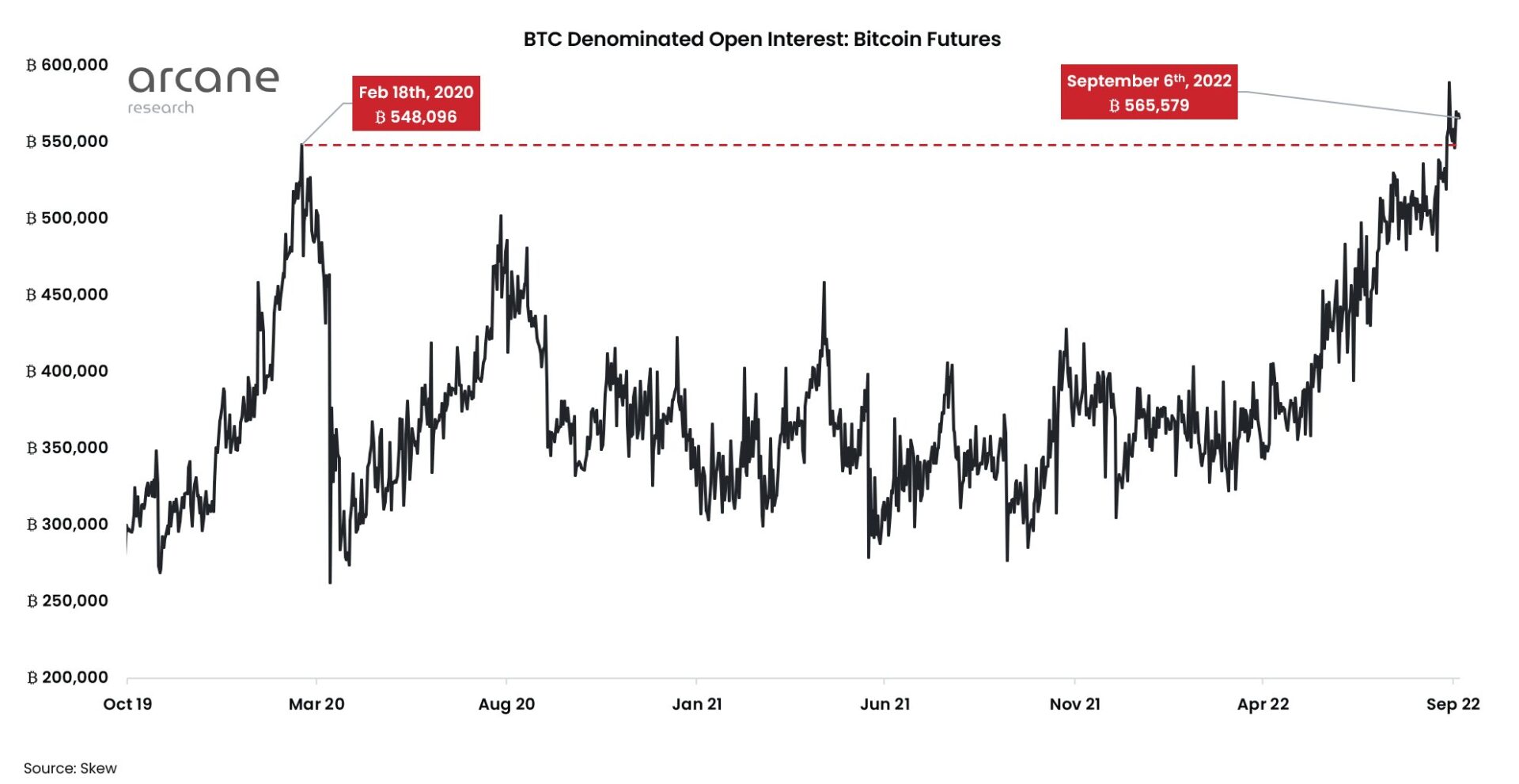 Bitcoin’s (BTC) futures market is now bigger than ever, and investors appear to be adding to bets on a continued price decline.

The bitcoin-denominated open interest (OI) in futures and perpetuals (futures with no expiry) tied to the largest cryptocurrency has risen to a new record high of 565,579 BTC ($10.6 billion), surpassing the previous peak of 548,096 BTC reached in February 2020, according to Arcane Research. The data covers positions on traditional commodities exchanges such as CME as well as crypto exchanges like Binance and Bybit.

Open interest refers to the number of contracts outstanding. While an uptick in open interest indicates an influx of money into the market, it doesn’t provide much information about market positioning.

So traders often read open interest in conjunction with other metrics like futures basis – the difference between prices in futures and spot markets – and funding rates, which represents the cost of holding bullish or bearish positions. If the funding rates are negative, it means the market is leaning bearish.

The latter seems to be the case with bitcoin. “At the exchange level, open interest is always net neutral, but shorts [bearish trades] are definitely the aggressor now,” Vetle Lunde, research analyst at Arcane, said. 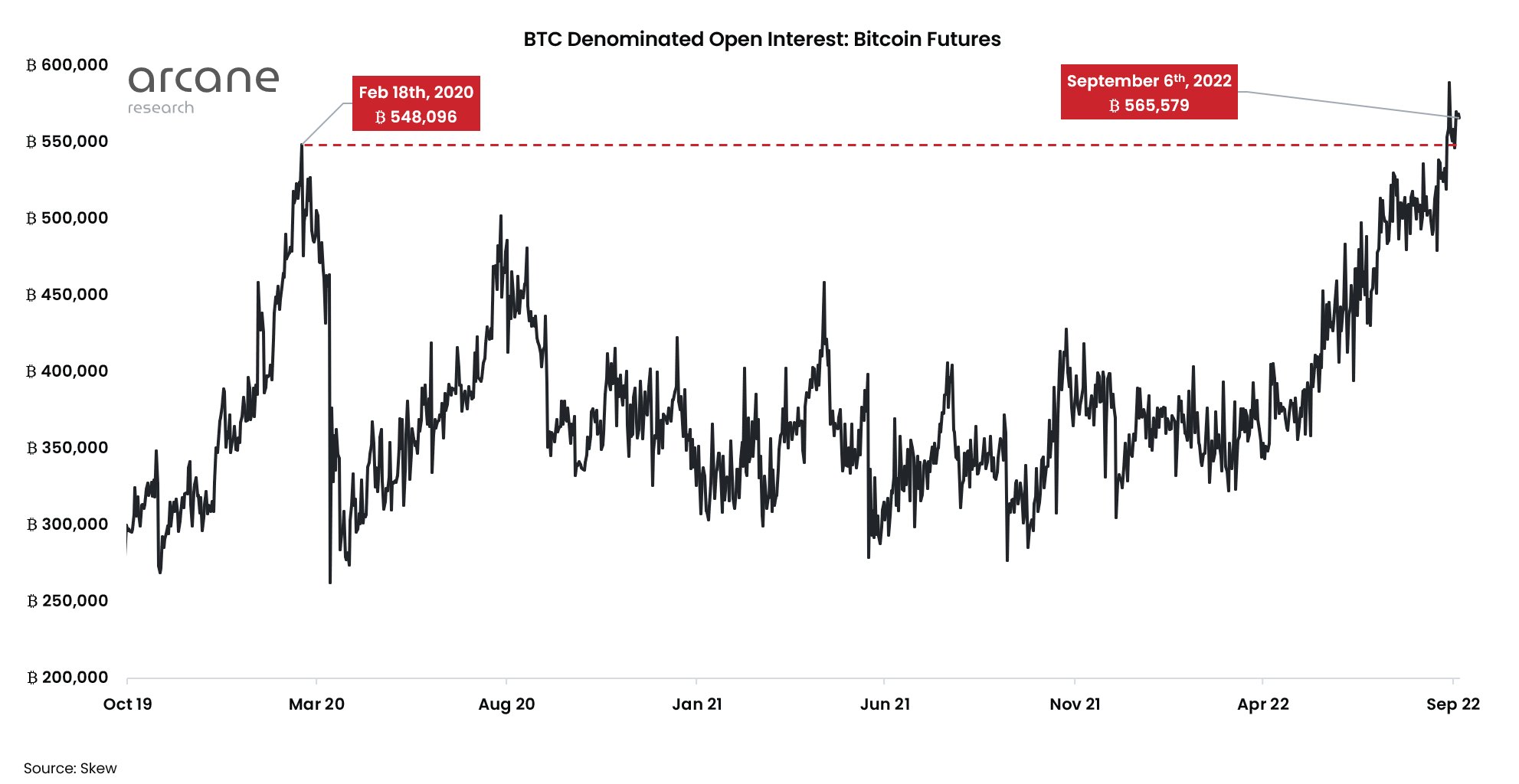 Bitcoin short-term futures listed on major exchanges, including the Chicago Mercantile Exchange (CME) and Binance, have been trading at a discount to the spot price since mid-August, indicating bearish flows.

The annualized discount in the CME-listed one-month futures slipped to 10% early this month, according to data tracked by derivatives research firm Skew. The CME is widely considered a proxy for institutional activity.

Outflows from U.S.-based exchange-traded funds (ETF) investing in the CME-listed bitcoin futures seem to have pushed the CME basis into the negative.

“U.S. BTC ETFs have seen a poor month, leading the net BTC exposure to decline by 2,879 BTC. This has made August the second-worst U.S. ETF month since launching in October,” Lunde noted in a report published on Sept. 5.

Bitcoin’s perpetual funding rates, charged every eight hours, have primarily remained negative since mid-August, a sign of shorts paying longs to maintain the bearish position in anticipation of a continued market swoon. 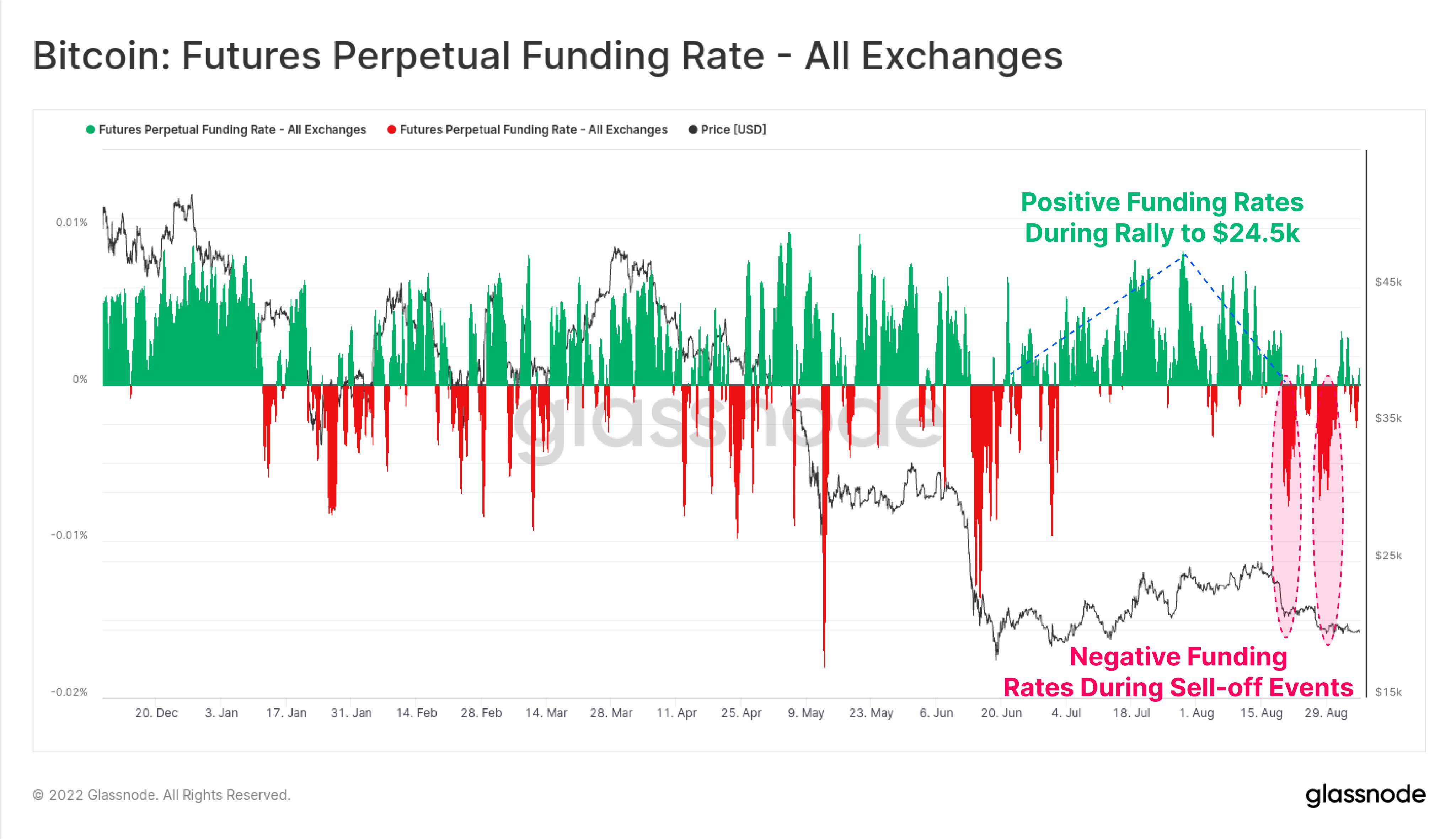 Bitcoin fell to a two-month low of $18,558 early Wednesday, according to CoinDesk data.

The increasing leverage could bring more volatility to the market. “I am very concerned about the vertical OI trend. Such level of leverage in the market is unsustainable if history is anything to go by,” Lunde said.