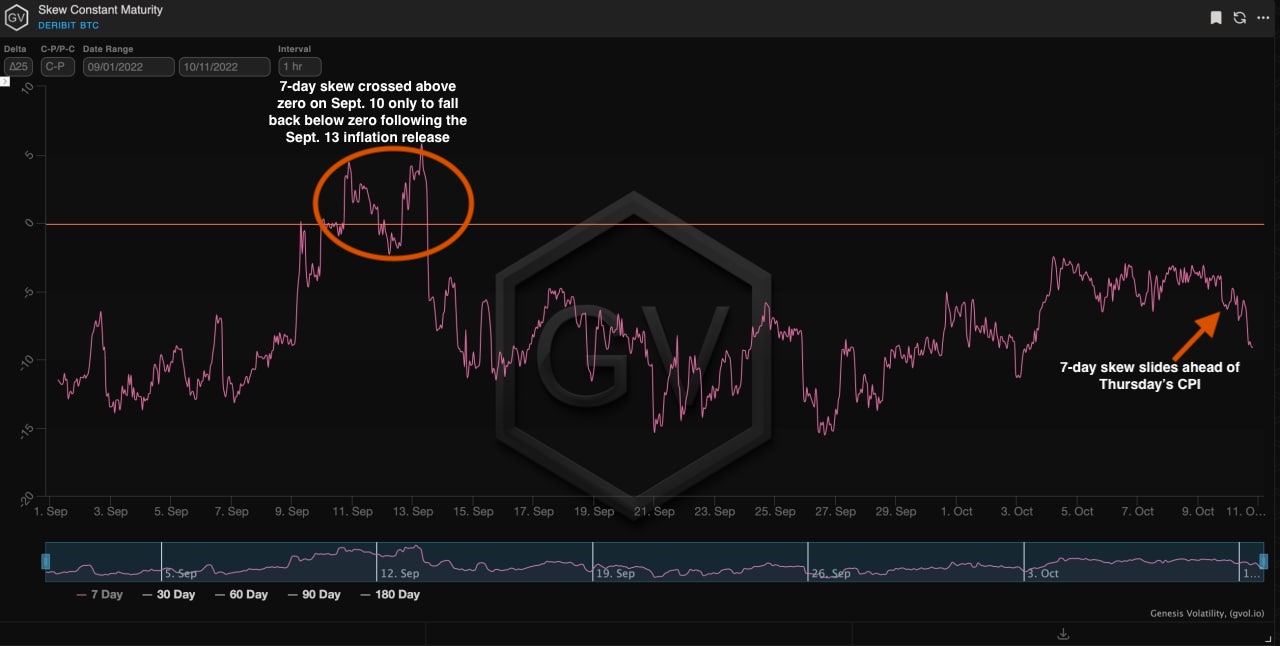 Bitcoin (BTC) traders have turned cautious ahead of a monthly report expected later this week on U.S. inflation. One reason might be because they were burned by wrong-way positioning the last time the Consumer Price Index (CPI) figures were released.

The Labor Department on Thursday is likely to report that the core CPI data, which strips out the impact of volatile food and energy prices, accelerated to a year-on-year pace of 6.5% in September, from August’s 6.3%. The headline figure, which includes all goods and services, is seen slowing a touch to an annual 8.1% from 8.3%, according to FactSet.

The core CPI is considered a better indicator of underlying inflation. So an uptick would back the case for continued rapid-fire Federal Reserve interest-rate hikes that have wrecked risk assets, including cryptocurrencies, this year.

A glimpse at crypto options markets would suggest that investors are using trades to protect themselves from the risk the CPI report could trigger renewed downside volatility in bitcoin.

The seven-day “call-put skew,” which measures the cost of calls relative to puts, has dropped from -5% to -10% in recent days. In other words, bitcoin puts – derivative contracts offering downside protection – are becoming more expensive than calls, which are typically seen as bullish bets.

With global markets on edge, bitcoin has been holding its own recently, trading just below the $20,000 level but so far avoiding a deeper sell-off.

“We have seen large buying in October expiry bitcoin puts at $17,500 and $18,500 strikes ahead of the CPI,” Shiliang Tang, chief investment officer at crypto hedge fund Ledger Prime, said.

The recent decline in the short-duration call-put skew is in stark contrast from the trend seen a month ago when the metric crossed above zero, suggesting a bias for calls.

Back then, traders were snapping up bullish bets on speculation the inflation data (released Sept. 13) would show price pressures cooled in August – and ostensibly making it easier for the Federal Reserve to pivot away from its liquidity-tightening campaign.

However, inflation came in hotter than expected, dashing the Fed pivot hopes and trapping call buyers on the wrong side of the market. Bitcoin fell by nearly 10% on the same day, with the skew falling below zero in favor of puts.

“Last month, ahead of the inflation data, traders bid weekly calls, pushing the seven-day call-put skew above the positive territory,” Gregoire Magadini, CEO of options analytics platform Genesis Volatility, told CoinDesk. “However, that trade was a huge loser. As such, traders are staying away from such bets this time.”

The preference for puts is also evident from the put-call volume ratio, which has doubled since Friday. 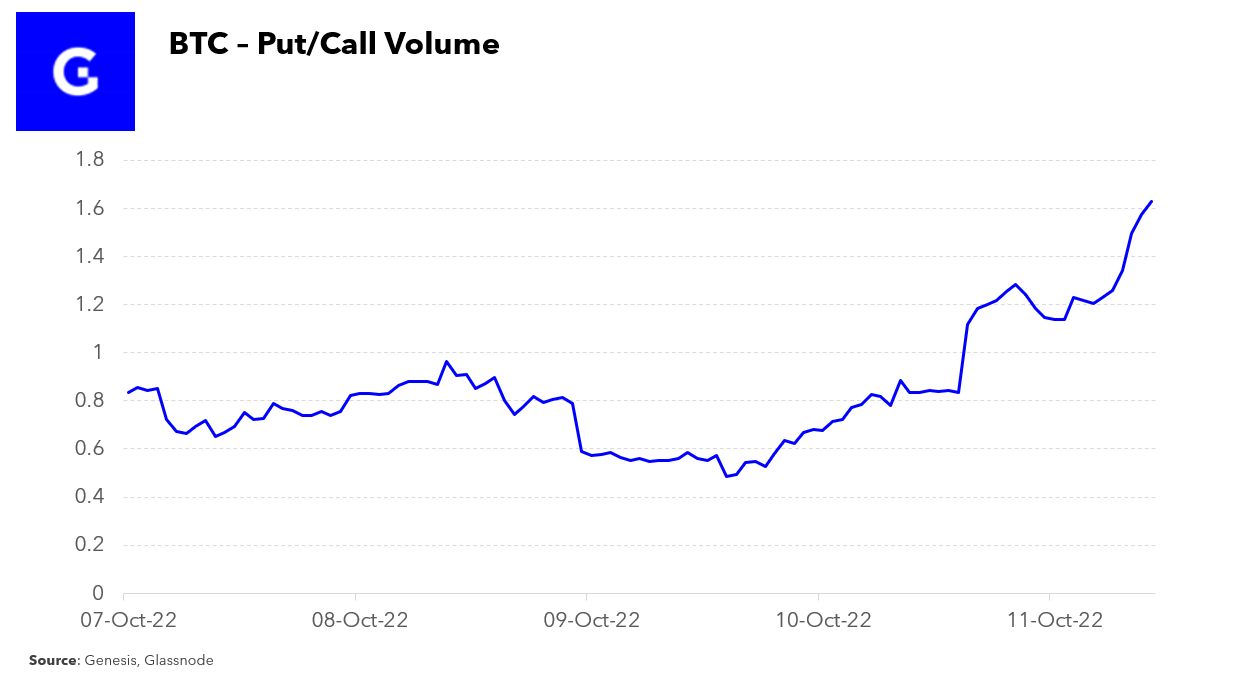 Some traders are buying “gamma” in anticipation of a big move after the CPI print, according to Singapore-based crypto options trading giant QCP Capital.

Buying gamma, or being long gamma, means purchasing a call, put or both. The long gamma positions make money when the underlying asset, such as BTC in this case, charts a big move in either direction and bleed money if the underlying remains dull. In other words, these are bets that price volatility, or “vol,” will increase.

“In the crypto vol space, we are seeing heavy demand” for front-end short duration options, Singapore-based options trading giant QCP Capital said in its Telegram-based channel. “The market is buying up gamma ahead of Thursday’s print.”

Layer 2Bitcoin and Beyond: The Future of Cryptocurrency InvestingOct 12, 20222