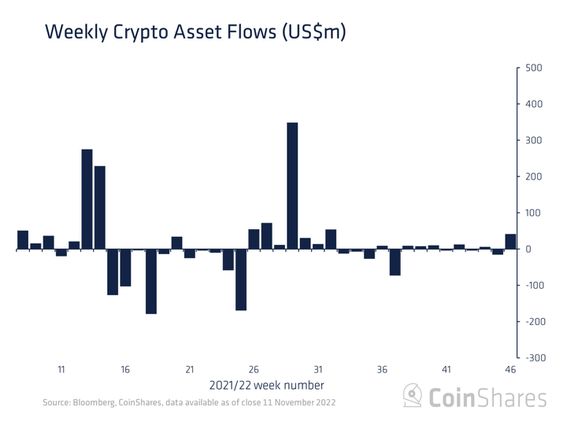 Crypto funds saw their largest inflows in 14 weeks, with net inflows of $42 million in the seven days ended Nov. 11, according to a CoinShares report on Monday.

The inflows coincided with the crypto market’s sharp downturn, triggered by the collapse of Sam Bankman-Fried’s business empire last week, including the FTX exchange and his Alameda Research trading firm.

Bitcoin (BTC), the largest cryptocurrency by market capitalization, has fallen over 20% in the past seven days and was trading at about $16,400 Monday. The CoinDesk Market Index was up 0.8% in the past 24 hours.

Despite the market downturn, the inflows could indicate that investors see “this price weakness as an opportunity” and are “differentiating between ‘trusted’ third parties and an inherently trustless system,” according to CoinShares.

A key footnote to the data is that so-called short-bitcoin investment products – those betting on a price decline – saw $12.6 million in inflows.

“While sentiment is predominantly positive, it has spooked some investors,” the report said.

Regionally, most inflows came from the U.S., at $29 million, followed by Brazil and Canada with $8 million and $4.3 million in inflows, respectively. Switzerland was the outlier, seeing $4.6 million in outflows last week, the report said.

Multi-asset funds saw $8.4 million in inflows, the most since June, according to CoinShares.

Meanwhile, blockchain-related equities saw their largest weekly outflow of $32 million since May, implying that “the more conservative investors in the asset class flew to safety.”

BusinessTokens of Alameda-backed DeFi Projects Maps.me and Oxygen Locked Up at FTXNov 15, 20223

BusinessConsenSys Economist Still Has Hope for Crypto After FTX's FallNov 15, 20224