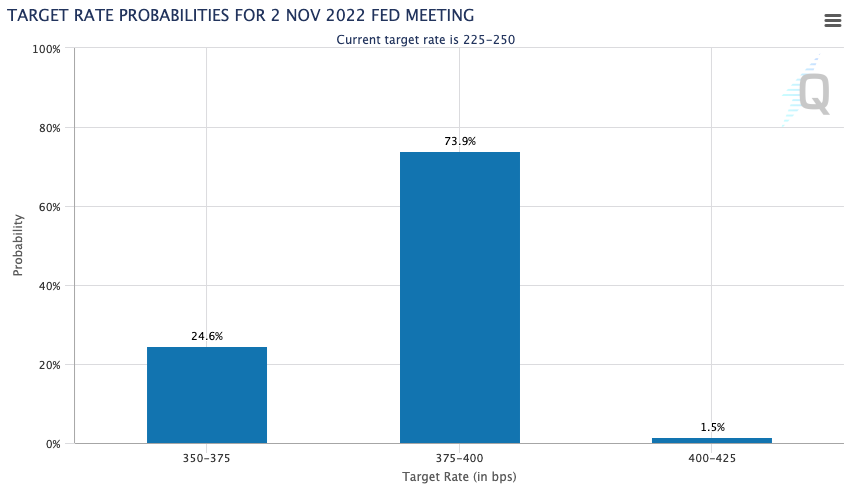 In a widely anticipated move, the Federal Reserve on Wednesday raised interest rates by 75 basis points (0.75 percentage point), marking the third consecutive time this year that central bankers decided for a hike of that magnitude – and stiffening headwinds in the bitcoin market.

Once the terminal rate – still a matter of disagreement among central bankers – is reached, some economists project it will likely stay at that level until inflation comes down significantly, possibly to the Fed’s target rate of 2%. Yet, projections by the Federal Reserve’s own top officials are estimating rate increases through 2023.

Bitcoin (BTC) whipsawed in the hours after the announcement, but sold off later in the afternoon along with U.S. stocks. As of press time, bitcoin was changing hands just below $19,000. As recently as last week, the largest cryptocurrency had traded above $22,000.

“Recent indicators point to modest growth in spending and production. Job gains have been robust in recent months, and the unemployment rate has remained low,” according to the statement by the Federal Open Market Committee (FOMC), a group of Fed officials who sets monetary policy.

The decision comes after the August consumer price index (CPI), released last week, showed that inflation, excluding energy and food prices, rose 0.6% from the month before.

A 1% hike would have been “radical and a signal to markets that the country’s central bank has lost control and is in panic mode, and that the likelihood of a recession has just increased considerably,” said Scott MacDonald, chief economist at Smith’s Research & Gradings.

With an increase of 75 basis points, the Fed stays in line with the magnitude of recent rate increases by the European Central Bank and Bank of Canada.

Federal Reserve board members and presidents doubled down on further interest rate hikes in their economic outlook, with no pivot in sight for 2023.

“My main message has not changed at all” since the Fed’s economic symposium last month in Jackson Hole,” Powell said during a press conference following the interest rate decision. “The FOMC is strongly resolved to bring inflation down to 2% and we will keep at it until the job is done.”

At the end of this year, the federal funds rate is expected to reach 4.4%, indicating the Federal Reserve will continue to raise interest rates at the next FOMC meetings. The Federal Reserve does not expect rate cuts until 2024, damping hopes of eased financial conditions anytime soon.

Powell, speaking about financial conditions, said that “what we think we need to do and should do is to move our policy rate to a restrictive level.”

“Today, we’ve just moved probably into the very, the very lowest level of what might be restrictive,” he added.

Traders in traditional markets are already betting that a 75 basis point rate hike is the mostly likely scenario at the FOMC’s next monetary-policy meeting in November. Just one month ago, the odds of a hike of that magnitude were seen as nil.

Traders now see a 75 basis point rate hike as the mostly likely scenario at the Fed’s next monetary-policy meeting in November. (CME)

What it means for crypto markets

Crypto markets were volatile in the wake of the Federal Reserve’s decision. Bitcoin dropped below $19,000 but soon rebounded to $19,500, then slid to $18,900. Equities also saw wild swings during Powell’s press conference. At press time, the S&P 500 and Nasdaq traded at around where they opened on Wednesday.

“This is yet another reminder that crypto moves at the whims of the Fed,” said Riyad Carey, a research analyst at crypto data firm Kaiko. “We saw this just last week when there was a sharper price reaction to the CPI release than to the [Ethereum upgrade] Merge. I don’t foresee crypto, especially BTC and ETH, bucking the Fed’s influence any time soon.”

Joshua Lim, a crypto derivatives trading specialist, said a 75 basis point hike would be “well received,” given that the probability of a larger move was priced in by traders as well.

“With Fed terminal rates in the mid-4% range, one thing we continue to hear is markets’ interest in real-world yields on-chain. This is a growing area, with on-chain credit to electronic market makers being the bulk of it,” he said.

Jocelyn Yang contributed to this article.