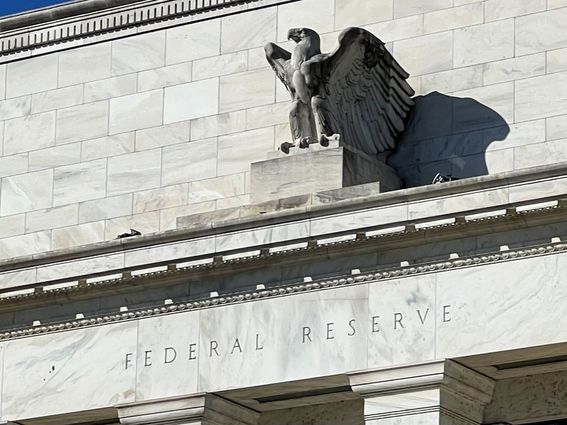 The U.S. Federal Reserve on Wednesday raised interest rates by 75 basis points (0.75 percentage point) to a range of 3.75% to 4 % in a move that was widely anticipated by market participants, including bitcoin (BTC) traders.

It’s the fourth consecutive rate hike of that magnitude by the Fed, which has aggressively been moving to jack up borrowing costs to cool the economy and in turn help bring down the highest inflation rate in four decades. Consumer prices have been rising at a pace of 8% on a 12-month basis, more than four times the Fed’s target.

“Ongoing increases in the target range will be appropriate in order to attain a stance of monetary policy that is sufficiently restrictive to return inflation to 2% over time,“ according to a statement from the Fed’s monetary-policy panel, known as the Federal Open Market Committee (FOMC).

Bitcoin rose 1.3% in the moments after the announcement by the FOMC.

Further clues about the path ahead could come from Fed Chair Jerome Powell’s press conference at 2:30 p.m. ET.

“Inflation continues to be sticky and high so rate hikes will continue, but the pace of hiking is set to slow,” said Nick Hotz, vice president of research at Arca. “Any sign of the Fed easing up would be taken as very bullish short-term for digital assets.”

Recent comments by central bankers suggest that this month’s rate hike could be the last at an increment of 75 basis points – three times as fast as the typical increment in prior economic cycles.

San Francisco Federal Reserve President Mary Daly, for example, warned last month that the Fed could push the economy into an “unforced downturn” if it raised rates too fast.

The FOMC’s statement suggested that the officials will keep a close eye on how the economy and inflation are responding to the recent series of rate hikes.

“In determining the pace of future increases in the target range, the Committee will take into account the cumulative tightening of monetary policy, the lags with which monetary policy affects economic activity and inflation, and economic and financial developments,” according to the FOMC statement.

Even though inflation in the U.S. has slowed from a year ago in recent months, it is still rising on a monthly basis, adding pressure on the Fed to not back down from tightening monetary policy.

Officials are also still trying to avoid an ugly recession and ease the pain of investors who have been grappling with a volatile U.S. Treasury market and falling stock prices.

Crypto assets have also seen a big drop in price ever since inflation started reaching painful levels earlier this year.

With inflation still running at 8.1% it might be too soon for central bankers to reverse course, given that the goal is 2%.

It could also be dangerous, because it could weaken the U.S. dollar against other currencies. The strength of the dollar is part of the reason why the U.S. economy is seeing much lower inflation than other countries, such as those in the European Union.

At a press conference following the announcement, Powell gave several hints that the Fed is considering slowing the pace of rate hikes in the near future.

“At some point it will become appropriate to slow … and it may come as soon as the next meeting, or the one after that,” he said. “It is likely we’ll have a discussion about this at the next meeting.”

While slowing is a possibility, pausing isn’t at this point, Powell reiterated. He stressed that he doesn’t think that the Fed has overtightened and that it is “very premature” to discuss pausing and “not a conversation to be had.”

The chair did, however, say that “how high to raise rates is more important than the pace of tightening.”