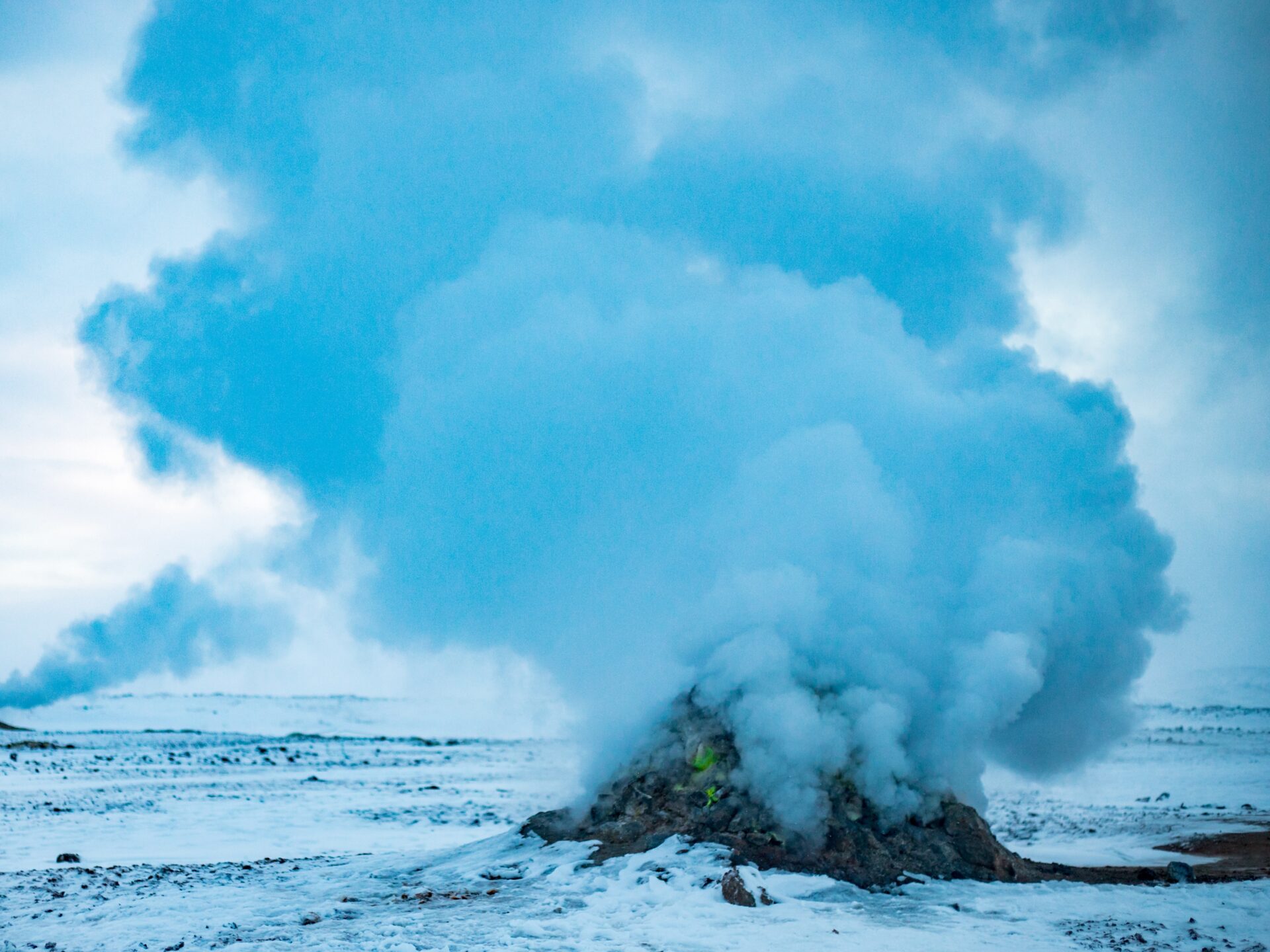 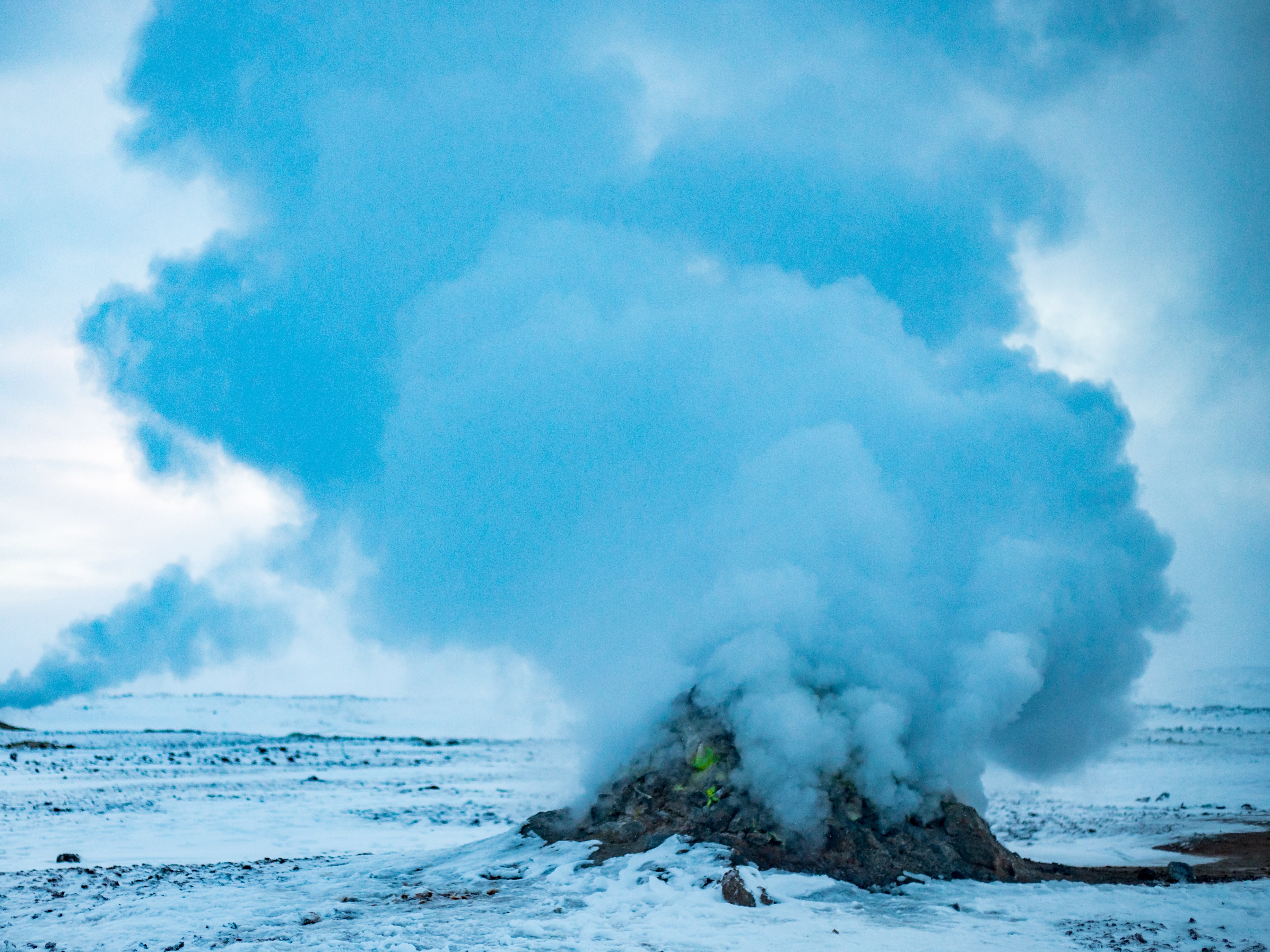 Bitcoin witnessed some downside after a strong U.S. jobs report for July. (redcharlie/Unsplash)

Gains early Friday in bitcoin (BTC) appeared to reverse after the Labor Department reported that the U.S. economy added 528,000 jobs in July, double the number economists had forecast.

The report may mean the Federal Reserve will be more aggressive in its efforts to tamp down inflation, which is at a four-decade high. Hawkish moves by the central bank tend to depress prices of risky assets like stocks and cryptocurrencies. 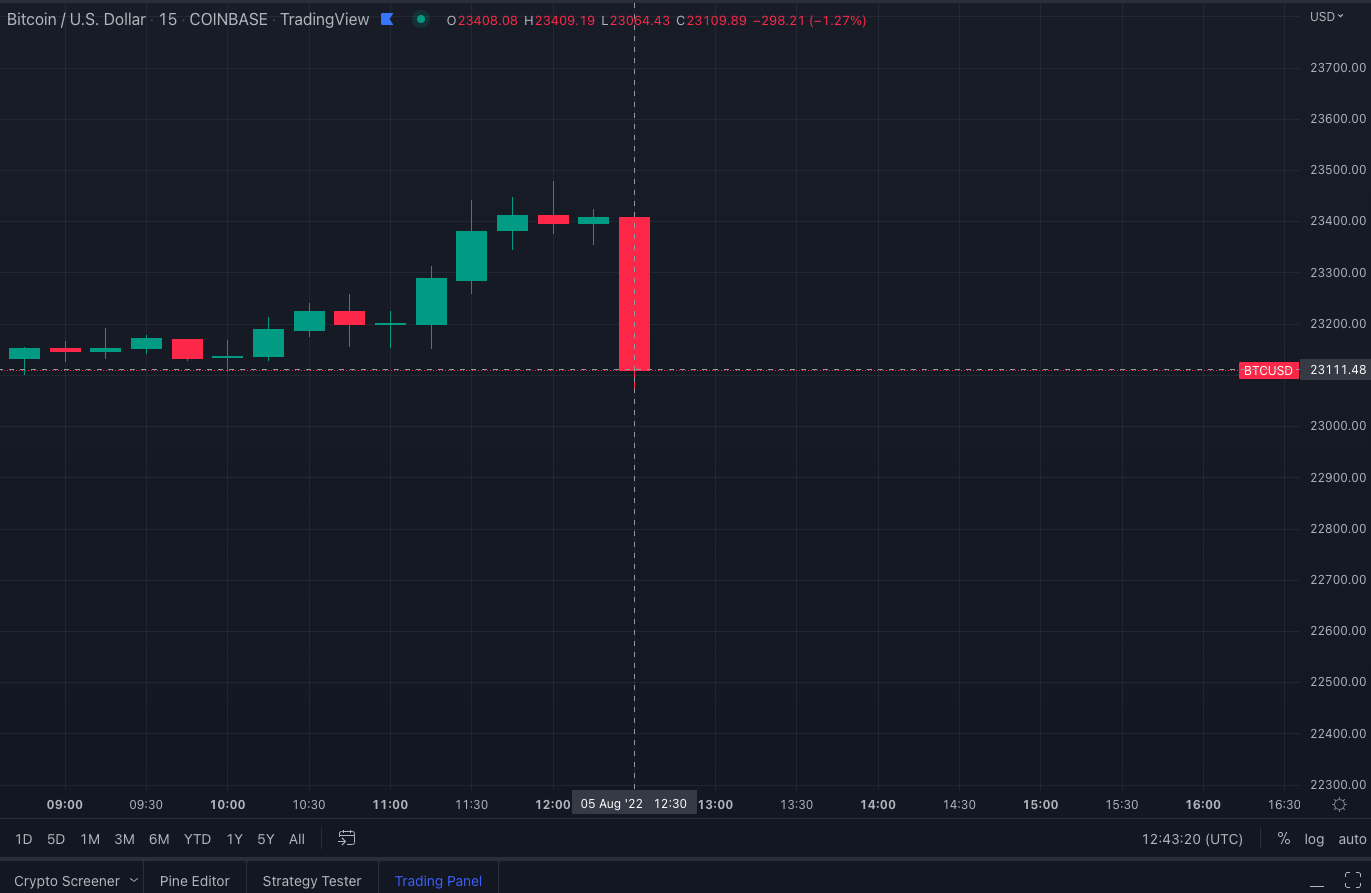 The jobs report came at the end of a slow week in crypto that nevertheless brought signs of growing institutional adoption. Asset manager Brevan Howard pulled off the largest crypto hedge fund launch ever, with more than $1 billion in assets under management, and BlackRock formed a partnership with crypto exchange Coinbase to make crypto directly available to institutional investors. Coinbase’s shares closed 10% higher on Thursday after jumping almost 40% intraday.

Bitcoin, the world’s largest cryptocurrency by market value, appeared to be fairly unaffected by the positive news this week. It has been trading in a range of $22,900 to $24,500 over the last seven days and lost 3% during that period.

Ether (ETH) was down 3.4% on the week, amid concerns over the Ethereum network’s upcoming Merge. The Merge is set to take place in September. The planned shift to a proof-of-stake network will have a number of consequences, Citigroup said in a research report Thursday, including lower energy intensity, the transition of ether into a deflationary asset and a “potential road map to a more scalable future through sharding.”

Altcoins had a positive week with Filecoin taking the lead with a 40% gain. Fantom’s FTM was up 14%, and near, the token of the Near platform, jumped 11%.

The token of the Flow blockchain surged over 35% in the wake of Facebook parent Meta Platform’s decision to use the blockchain to expand its NFT initiative.

The token surged after Meta announced the international expansion of its recently tested digital collectibles feature on its photo and video-sharing platform Instagram and declared support for NFTs created on the Flow blockchain.

Meta also announced support for Coinbase wallet and Dapper wallet as third-party wallets compatible for use as part of its expansion plan.

The Flow blockchain was created by Dapper Labs and is best known for a NFT hit NBA Top Shot. In May, Dapper Labs unveiled a $725 million fund to boost “gaming, infrastructure, decentralized finance, content and creators” in the Flow ecosystem.

The Flow token’s price rally is backed by a triple-digit jump in futures open interest across major exchanges, including Binance, according to data tracked by Coinglass. Open interest refers to the number of contracts traded but not squared off with an offsetting position.

An increase in open interest means more money is being deployed in the FLOW market and validates the price rally.

FLOW has topped its 100-day simple moving average (SMA), leaving both bitcoin and ether behind, which continue to trade below the key SMA. The bigger downtrend, however, is still intact as seen in the chart below. 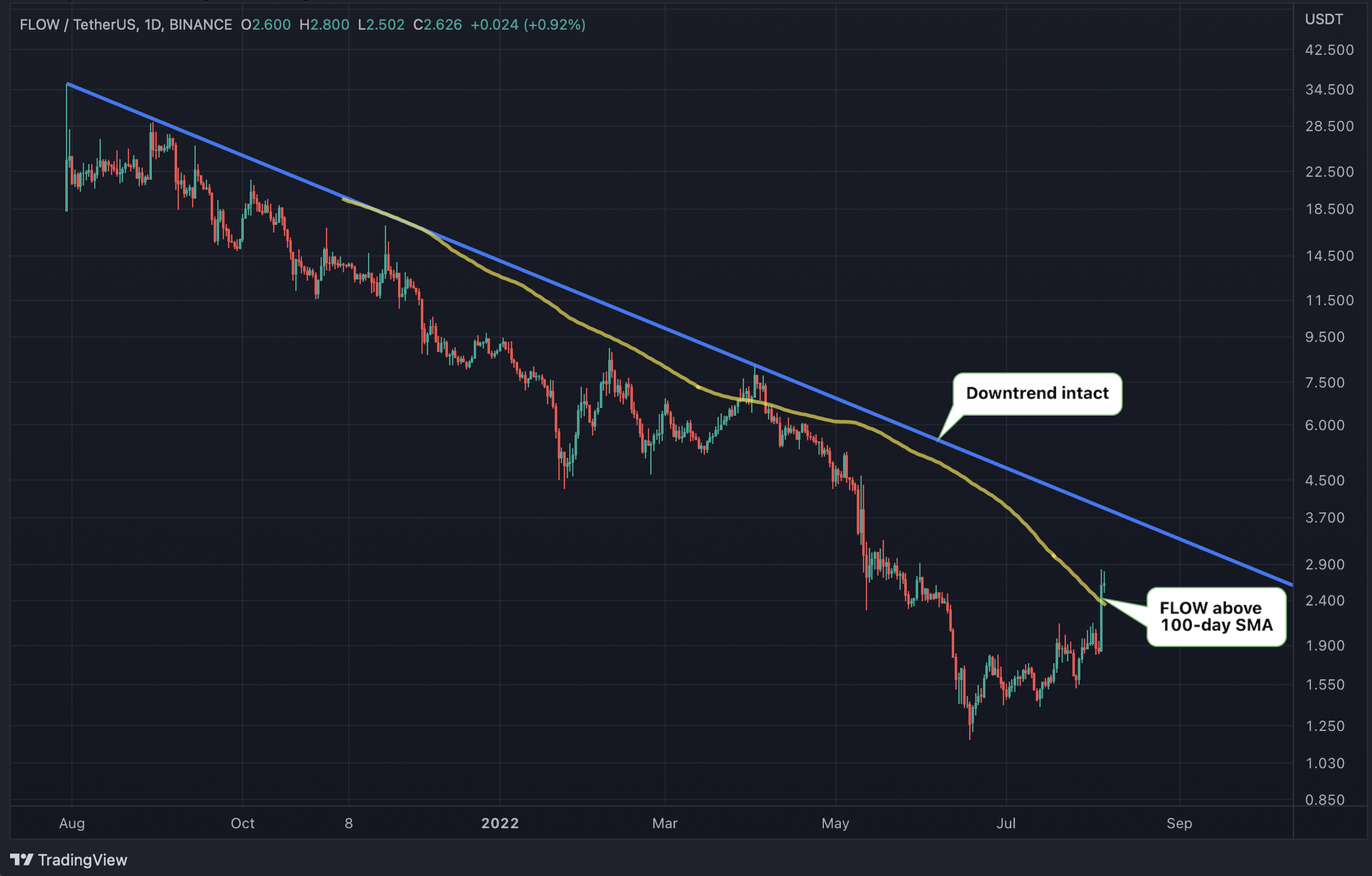 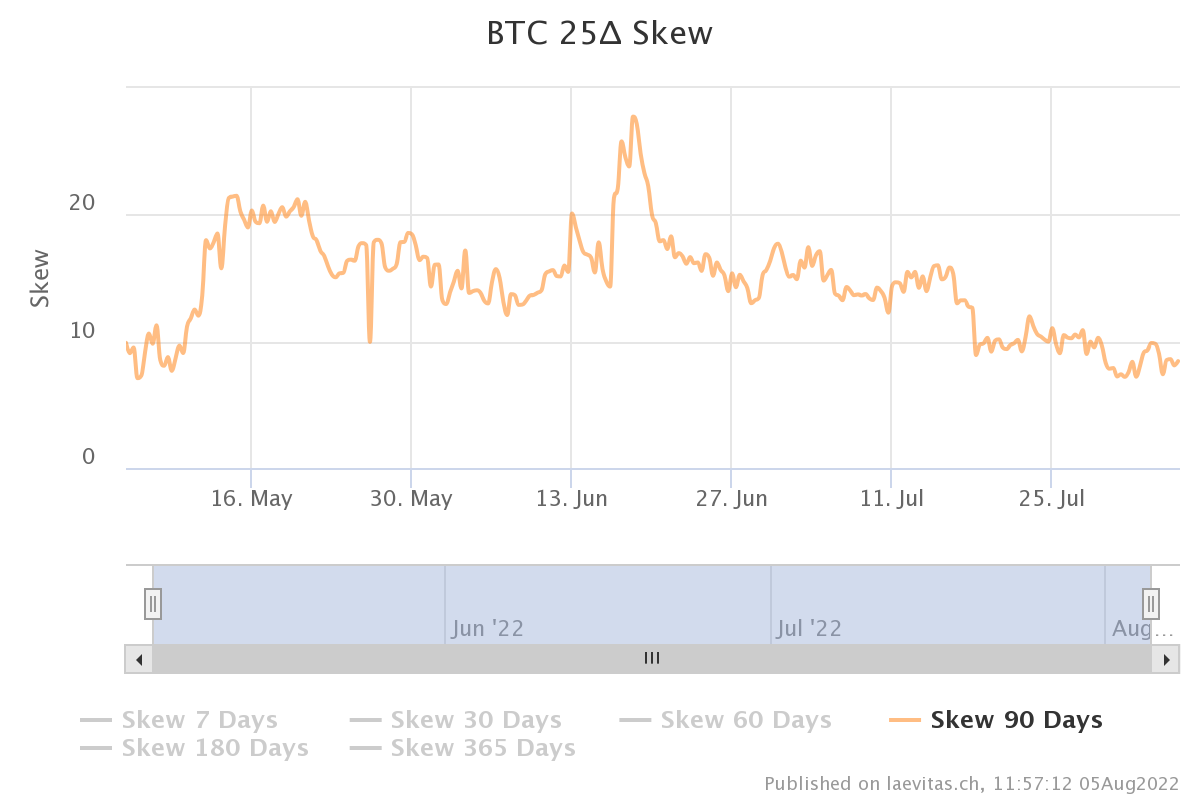 Ancient source of oxygen for life hidden deep in the Earth