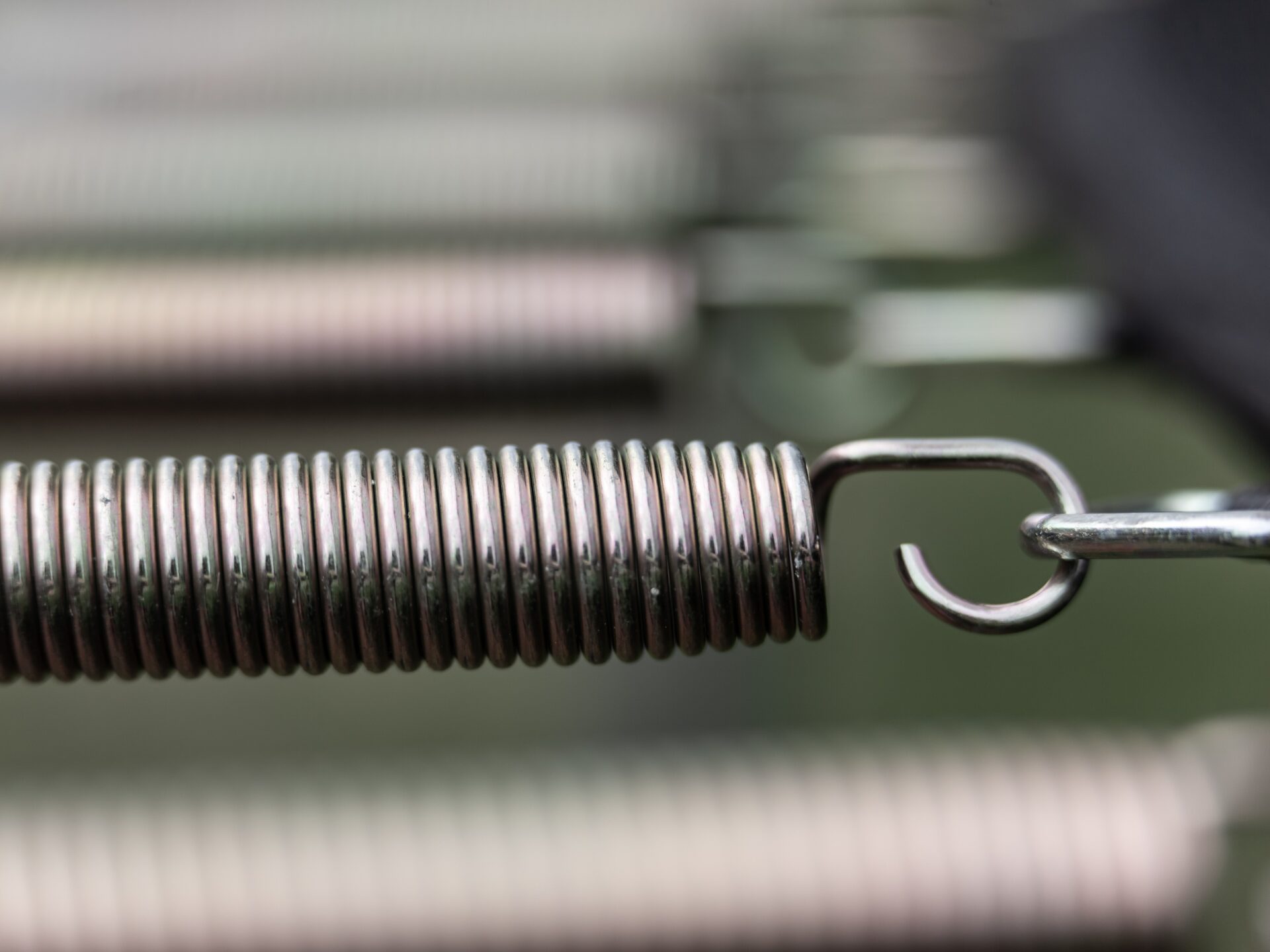 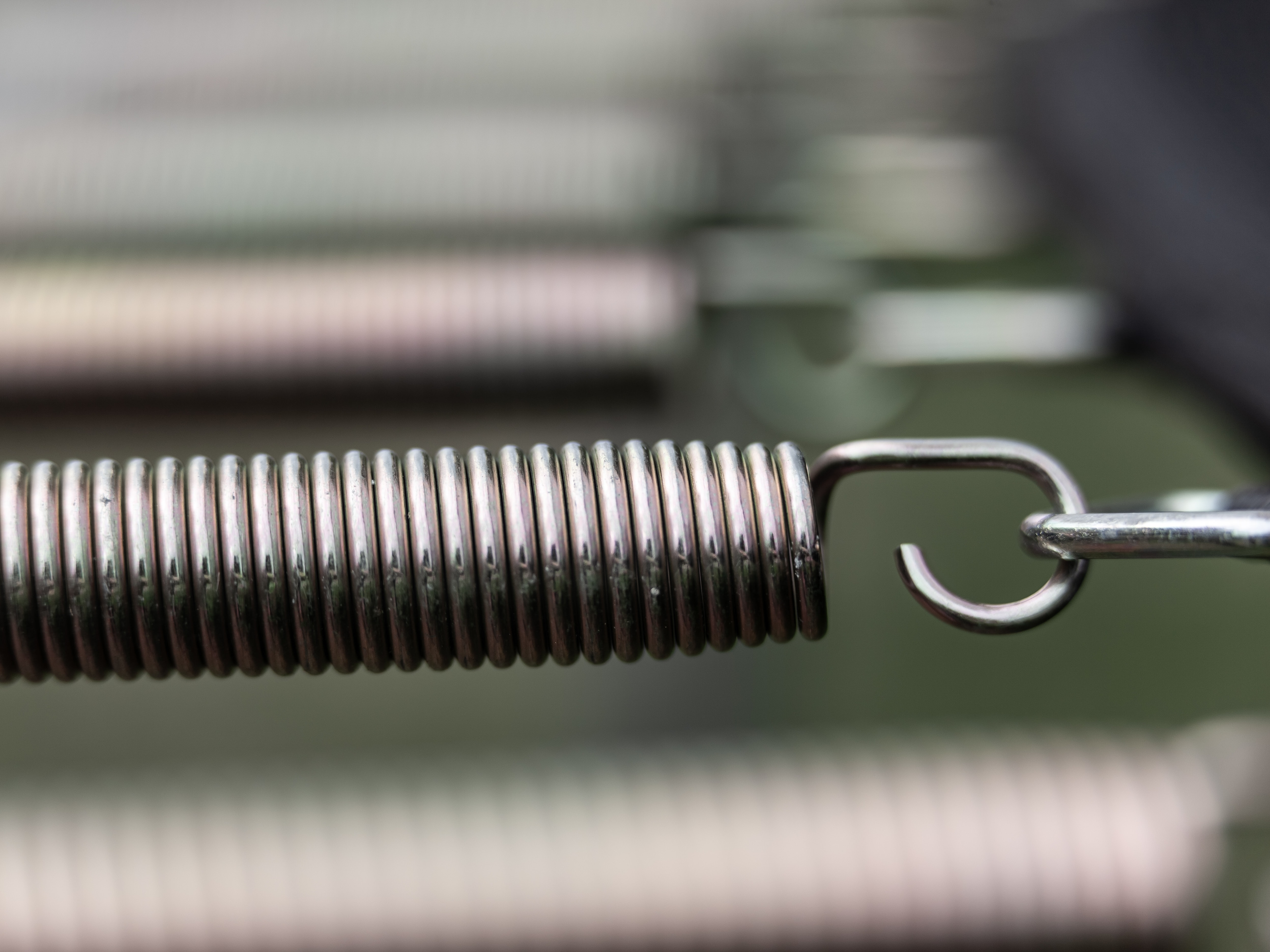 With heightened tensions between Beijing and Washington, BTC, ETH and the rest of global markets fell. (James Allen/Unsplash)

Bitcoin (BTC) and ether (ETH) were both down on Tuesday as global markets fell on fears that the U.S. House of Representatives Speaker Nancy Pelosi’s (D-Calif.) planned visit to Taiwan could heighten tensions between Beijing and Washington.

The prospect of escalating geopolitical tensions led to a fresh risk-off sentiment among investors, and cryptocurrencies are seen as risky assets.

“The larger dip in ether is just ETH taking a profit trade from investors after a 50% rally in July,” said Pablo Jodar, financial products manager at Storm Partners, a systems provider for the crypto industry in Europe.

In July, ETH rallied by 56% and BTC rose 16%, according to data from TradingView. 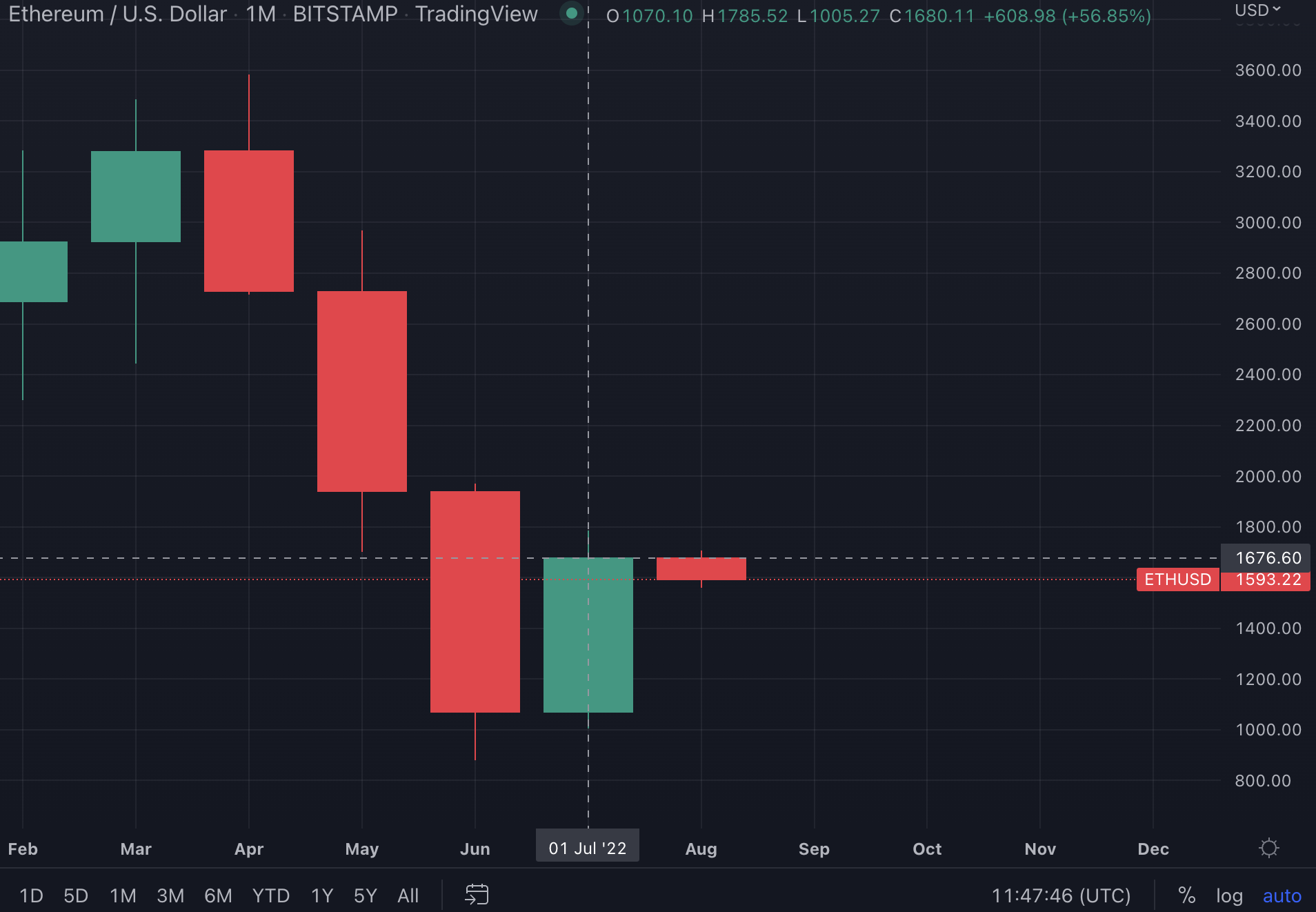 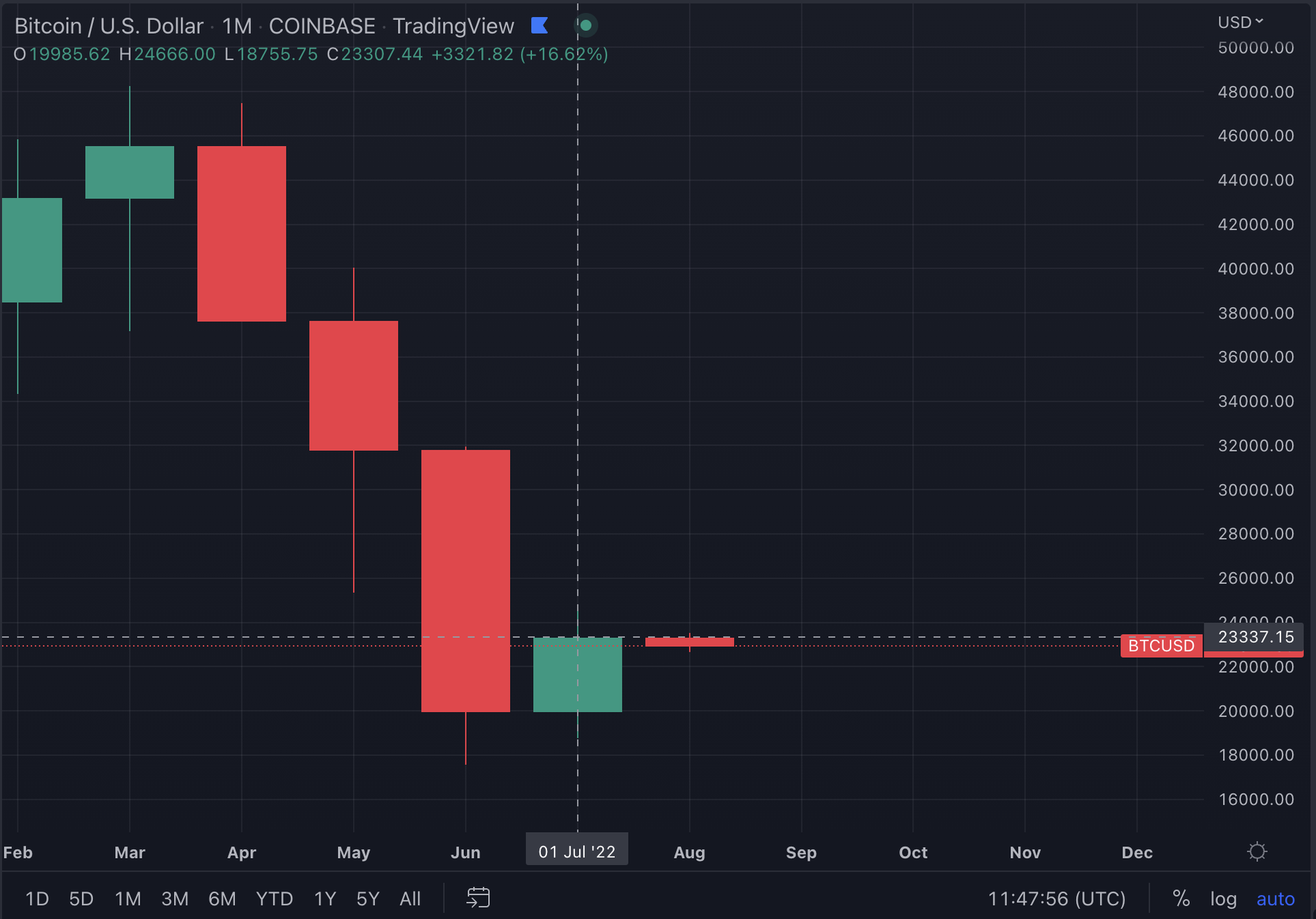 The correlation with stocks remains strong for cryptocurrencies, which signals that the Hang Seng Index’s drop on Tuesday hurts the momentum, Jodar said.

“The support for ETH now sits at around $1,500,” Jodar said. “If ETH manages to keep that level, it will be a positive signal for the market and the bullish trend could continue to $1,700.”

Tokens trading in the green Tuesday included Crypto.com’s cronos (CRO) and chilliz (CHZ), which is a digital currency for sports and entertainment, powering the Socios.com platform. They were up by 7% and 13%.

Elsewhere, Coinbase Prime has added ethereum to its expanding list of staking options for U.S. institutional clients, according to a blog post Monday.

According to a report from CoinShares, crypto funds saw a fifth consecutive week of inflows, with net inflows of $81 million in the seven days ended July 29. July’s $474 million of inflows were the largest monthly amount this year and reversed June’s outflows of $481 million.

User activity on the Aave lending platform rose to a 2022 high ahead of the launch of its yield-generating stablecoin, GHO. Read more about that here.

For the first time this year, ether’s market share of trading volume achieved 50% parity with bitcoin’s, according to data provided by Kaiko. It was previously around 45% to 50%. 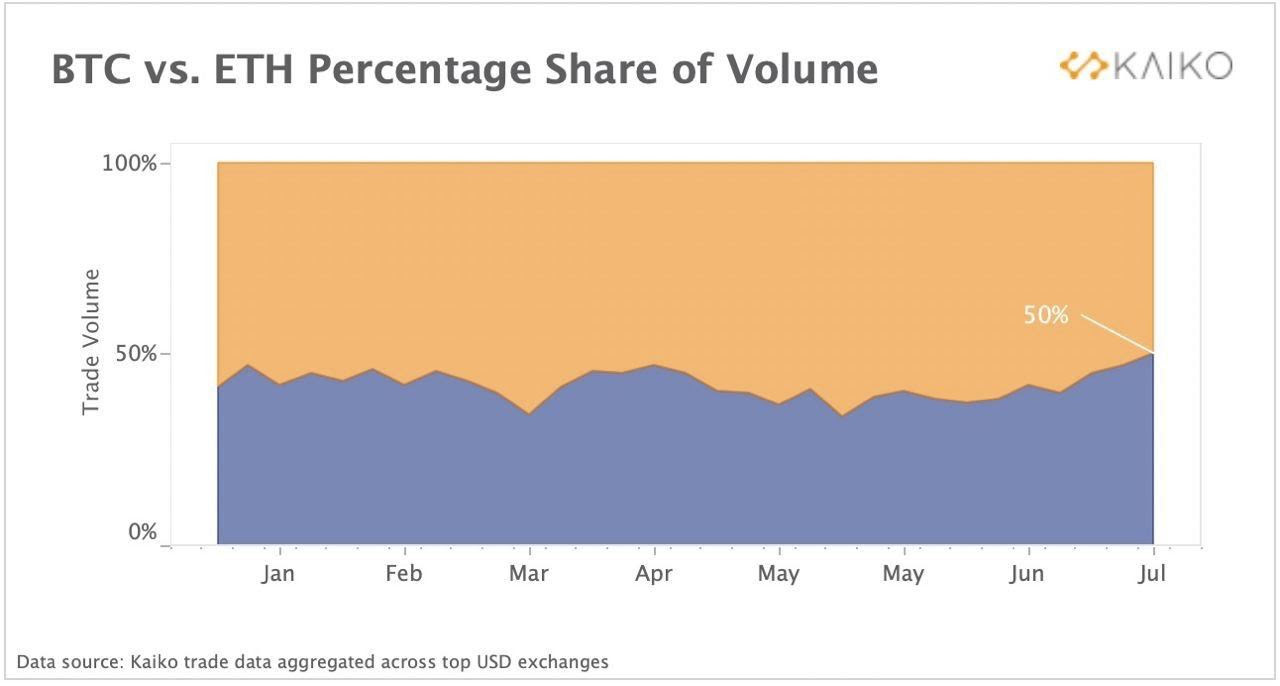 “This could be because of FOMO from investors of ETH 2.0 or because there is already a change in tendency,” Jodar said, using the acronym for “feat of missing out” and referring to an upcoming software update on the Ethereum network.

“In the next bull market, maybe we will see a change in market dominance,” he said.

Chart of the Day: U.S. Yield Curve Flattest Since 2000 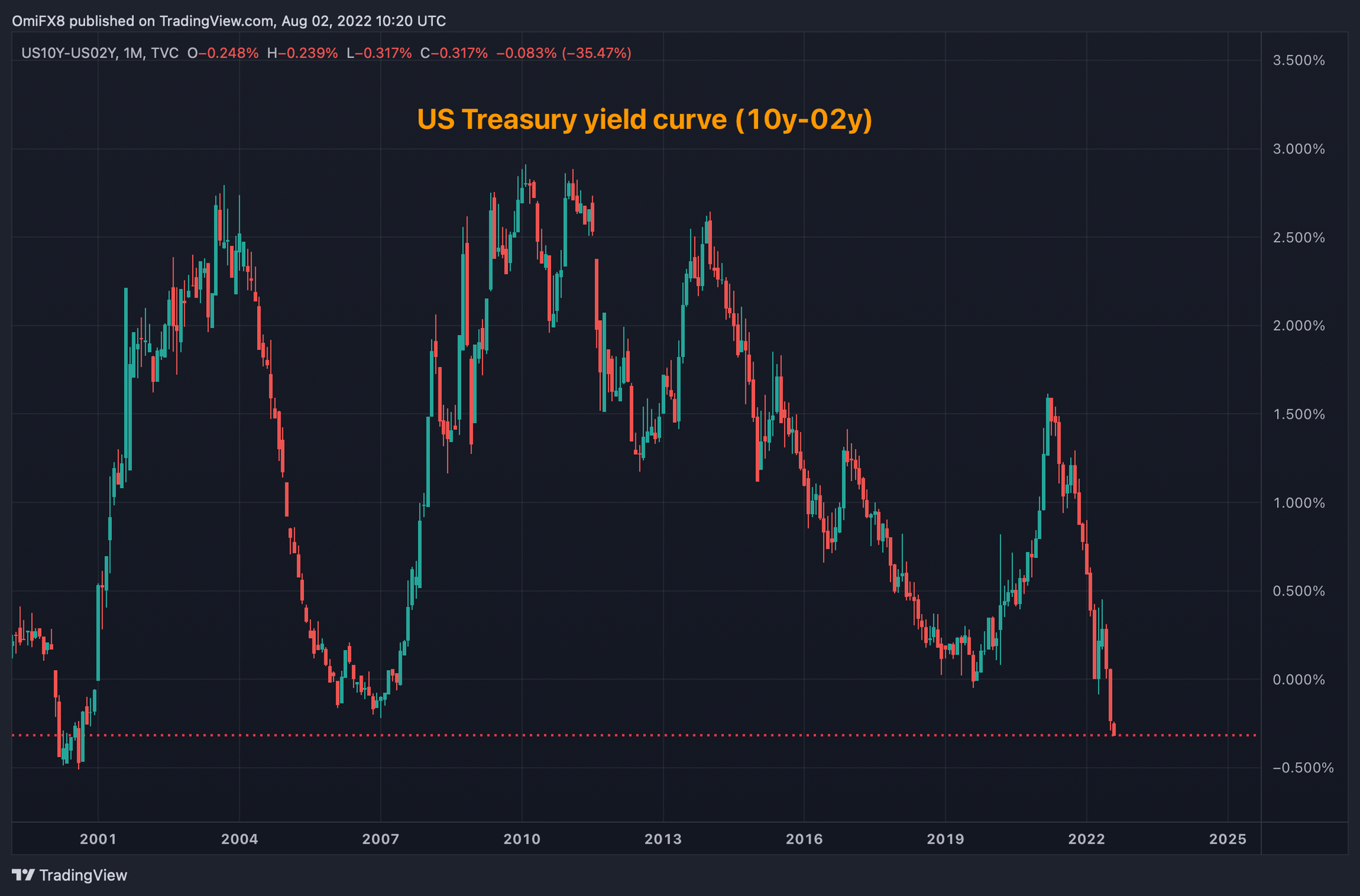 Binance Taps Co-Founder Yi He to Head $7.5B Venture Arm