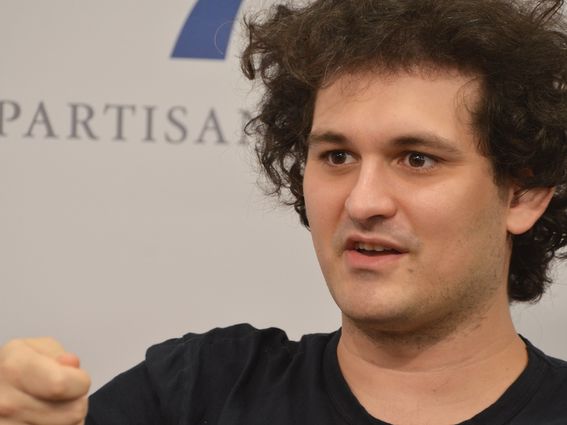 Prices: Solana’s SOL token continues its plunge. Bitcoin and ether drop slightly ahead of the U.S. mid-term elections and the latest inflation figures.

Insights: A number of exchange tokens have outperformed bitcoin over the past week. FTT was not among them.

As Monday wore on, Solana’s SOL token sank deeper and deeper into the red.

The 11th largest cryptocurrency by market capitalization was recently down more than 10% over the past 24 hours as investors speculated about its possible place in the ongoing drama surrounding Sam Bankman-Fried’s FTX exchange and his trading firm, Alameda Research. According to a copy of the Alameda balance sheet seen by CoinDesk, Alameda holds $292 million of “unlocked SOL,” $863 million of “locked SOL” and $41 million of “SOL collateral.” One theory is that Alameda might try to dump its SOL tokens in a bid to raise fresh liquidity, wrote CoinDesk’s Jocelyn Yang.

Early Monday, Bankman-Fried tried to assure FTX users, tweeting: “A competitor is trying to go after us with false rumors. FTX is fine. Assets are fine.”

Bitcoin and ether, the two largest cryptos in market value, had a quieter day, falling about 2% and 1.3%, respectively, over the past 24 hours. BTC remained comfortably over its most recent $20,000 support level after jumping over $21,000 late last week as investors’ looked with hope at signs the U.S. Federal Reserve would scale back from its current diet of hefty, 75 basis point interest rate hikes. ETH continued to hover well above the $1,500 threshold it retook about two weeks ago.

A day ahead of the U.S. midterm elections, stocks started the week on an up note as the tech-heavy Nasdaq and S&P 500, which has a strong technology component, rose nearly a percentage point, while the Dow Jones Industrial Average (DJIA) closed up 1.3%. Safe haven gold joined the crowd in the green, albeit barely, inching up 0.1%. Brent crude oil, a widely watched measure of energy markets, held over $98, the perch it assumed late last week.

As CoinDesk reported, Binance CEO Changpeng “CZ” Zhao tweeted that the exchange plans to its FTT tokens. Although Alameda CEO Caroline Ellison offered to buy back Binance’s entire FTT allocation, the token declined from over $25 to under $22 and is down 2.5% on the day.

In his weekly Two Satoshis newsletter, Jeff Dorman, chief investment officer at crypto hedge fund Arca, called the contretemps between the two giants “another blow against the industry (and financial institutions in general) simply for a lack of voluntary transparency, but it’s another giant check mark for the transparency of blockchain data and the skilled researchers trained to uncover, read, and interpret this data.”

A Good Week for Exchange Tokens Not Called FTT

Although crypto continues to trade sideways, with bitcoin up only a slight 6% on month, exchange tokens pushed out solid returns — even out performing bitcoin – with the exception of FTX’s FTT.

Exchange tokens offer holders discounts on fees at their respective exchanges. It’s now at $86.5 billion market, according to CoinGecko. There’s a line of thought which holds that these exchange tokens are similar to equity insofar as their price reflects the success of the platform, but there’s also a compelling argument that goes in the other direction.

But during the last week, many exchange tokens even outperformed bitcoin. 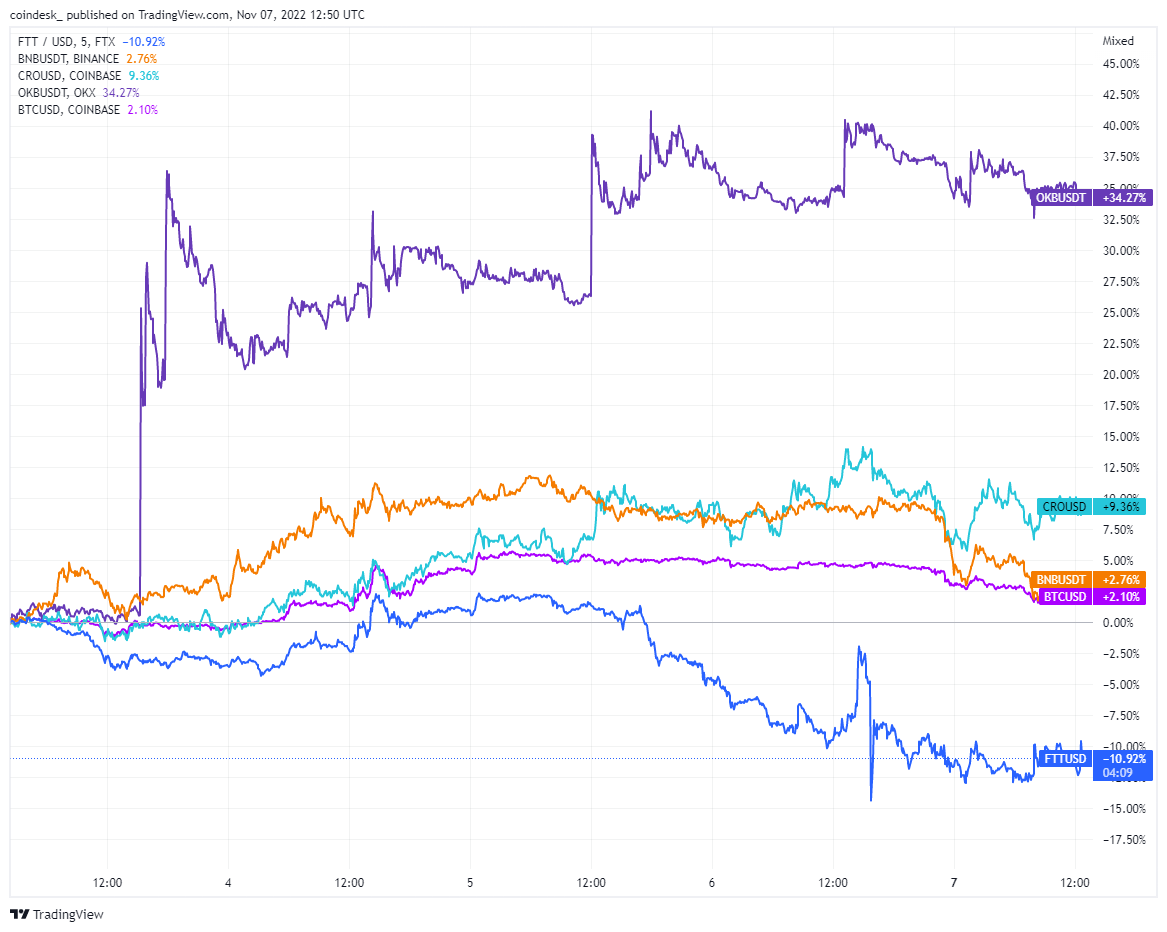 Over the past week, OKX’s token, OKB has climbed nearly 35%, fuelled by positive news that the exchange has registered itself as a licensed digital assets business in The Bahamas.

Crypto.com’s CRO token has gained just under 10% as the token slowly recovers after the exchange was hit with a double whammy of an almost 91% decline in exchange volume year-over-year and major layoffs.

Binance’s BNB token found itself just slightly outperforming bitcoin. While the exchange itself has had some positive headlines over the last week, like its plan to potentially purchase a bank to bolster its licensing regime, token holders might be concerned that its getting caught in a crossfire between its CEO Changpeng “CZ” Zhao and FTX’s Sam Bankman Fried.

Over the weekend, CZ tweeted that Binance was planning to liquidate its holdings of FTT after CoinDesk revealed that the balance sheet of the FTX-affiliated fund Alameda Research contained a notable amount of FTT.

On Twitter, spectators quickly highlighted pointed out that liquidation of FTT holdings by a stakeholder as large as Binance would likely cause market contagion if Alameda’s balance sheet became illiquid.

Given that the industry just suffered through the collapse of Three Arrows Capital, testing the resilience of Alamada’s balance sheet is something that many in the industry would prefer not to do. Still, as CoinDesk reported on Monday, open interest is building on FTT, as are negative funding rates.

So far, FTT is down around 11% over the last five days. Let’s see what happens next.

US Seizes 50K Bitcoins Related to Silk Road Marketplace: The bitcoin, which was obtained in 2012 and which was valued at $3.36 billion when it was discovered in November, is now worth $1.04 billion.

In Praise of White-Hat Hackers, but Overreliance Is Foolish: A white hat Nomad exploiter says stronger incentives are needed to reward the good Samaritans who help protocols identify and patch vulnerabilities.

USDC Issuer Circle to Add Solana Support for Euro Coin in 2023: The stablecoin was introduced in June and is backed by a mix of cash and European government debt.

Stablecoin Issuer Paxos Plans to Hire at Least 130 in Singapore, Bloomberg Reports: Co-founder Rich Teo told Bloomberg the firm is planning a three-year expansion built around Singapore as its hub for growth outside the U.S