Tesla sold over $900 million in bitcoin during its second quarter. (Blomst/Pixabay)

Insights: Tesla’s jettisoning of $936 million in BTC suggests it does not really believe in the asset.

Hi, I’m James Rubin, here to take you through the day’s crypto market highlights and news.

Bitcoin fell slightly in Thursday trading as investors continued to absorb the aftershocks of Tesla’s (TSLA) decision to shed $936 million in bitcoin from its balance sheet during its second quarter.

The largest cryptocurrency by market capitalization was recently trading at about $23,100, down more than a half percentage point over the past 24 hours. The second, consecutive daily decline following an early week rally underscored Tesla CEO Elon Musk’s influence among digital asset investors. Musk’s utterances about bitcoin and dogecoin (DOGE) have sent markets for those assets intermittently soaring and plunging for much of the past two years.

“Bitcoin was showing signs of a potentially meaningful breakout, but that quickly came to an end after Tesla reported earnings,” Oanda Americas Senior Analyst Edward Moya wrote in an email.

Yet, Moya noted that traders should not have been surprised by Musk’s support of the sale, given the crypto winter and comments he make a month ago at the Qatar Economic Forum that he had not recommended people invest in crypto.

Moya added optimistically: “This is not a game changer for bitcoin.”

Ether, the second-largest crypto by market cap, was changing hands just below $1,600, up more than 3% over the same period. Other major altcoins were in the green of a mostly dark shade, with Cosmos’ ATOM and Polygon’s MATIC climbing more than 13% and 8%, respectively, at one point.

Equity markets also rose on Thursday, albeit less robustly than cryptos. The tech-heavy Nasdaq jumped 1.3% while the S&P 500 increased almost a percentage point, respectively. Stocks have found even ground lately amid better-than-expected earnings reports from a number of major brands, most recently Tesla and Netflix (NFLX).

Investors have also been encouraged by reports that the U.S. central bank’s Federal Open Market Committee (FOMC) would raise interest rates by 75 basis points instead of opting for a more robust 100-point hike. The mildly, less hawkish turn has suggested to some observers that inflation may soon stall without the economy plunging into recession. A Thursday report showing jobless claims in the U.S. reaching an eight-month high offered the latest evidence of a more desirable, gradual economic weakening.

Still, rising prices remain a concern in the U.S. and beyond as the European Central Bank raised borrowing costs for the first time in 11 years.

Meanwhile, the crypto industry continued to suffer the fallout from the ongoing bear market, with cryptocurrency exchange Blockchain.com cutting 25% of its workforce – about 150 people. Blockchain.com follows recent layoffs at a number of other large crypto exchanges worldwide, including Coinbase (COIN), Bullish, Bitso and Buenbit.

Other news was more upbeat with banking giant JPMorgan (JPM) saying in a report that demand among retail investors in the crypto market was improving, and that the “intense phase” of deleveraging appeared to be over. And decentralized finance (DeFi) trading platform Hashflow closed a $25 million Series A funding round at a valuation of $400 million.

Moya expects trading to remain volatile until the FOMC meets. “Bitcoin could be in for a choppy period until we get beyond next week’s FOMC decision,” Moya wrote.

Let’s rewind to the zenith of 2021’s first-quarter bull market. Bitcoin was on an absolute tear and retail investors were clamoring for more and more of it.

But for those uncomfortable with buying bitcoin on an exchange and storing it in a wallet, there wasn’t really any other way of getting exposure to the asset class. The U.S. Securities and Exchange Commission, still, as of mid-2022, hasn’t approved a bitcoin exchange-traded fund. While bitcoin ETFs began trading in Toronto in April of 2021, not every brokerage in the U.S. can access the Toronto stock exchange.

So the idea of the bitcoin macro proxy was born. These are stocks of a company that has exposure to bitcoin and would allow the trader to realize some of bitcoin’s gains without holding the actual asset. 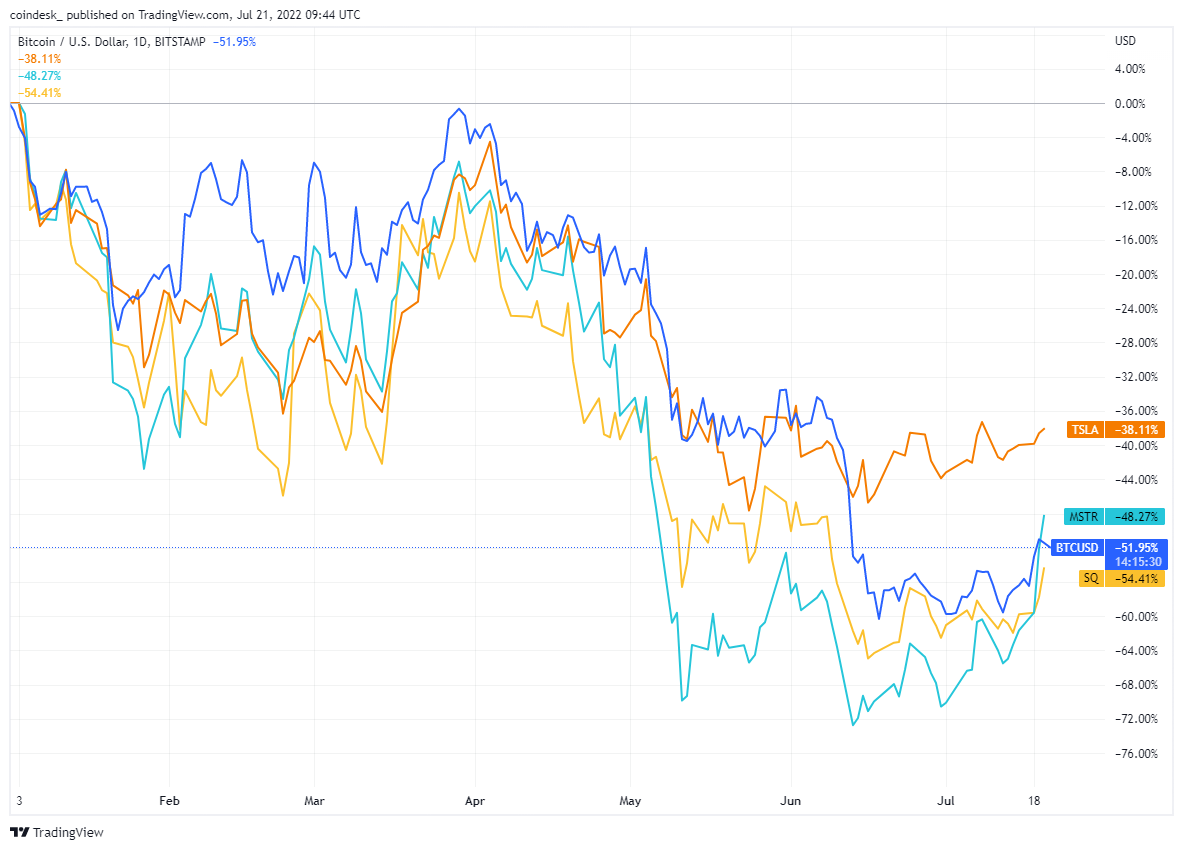 For a while, Tesla offered U.S. consumers the option to purchase a vehicle with bitcoin. It’s not clear if anyone took the carmaker up on its offer partially because of the complexity of payment but also the unclear tax implications of liquidating bitcoin for a purchase.

So without a practical use for bitcoin, and the impairment costs skyrocketing, Tesla jettisoned $936 million of it (75%) during the last quarter. Company executives cited liquidity concerns as the reason, as sales in China have ground to a halt due to the country’s strict COVID-19 measures.

But this reason is a non-starter as institutional-grade crypto lending services, like Gemini Prime, could have easily fulfilled an order for a few hundred million dollars-for-bitcoin. That’s if Tesla actually believes in the longevity of bitcoin.

And for those who bought Tesla as a bitcoin proxy instead of the coin itself, they would have outperformed crypto. Year to date, bitcoin is down around 50%. Tesla, only down 38%.

Remarkable for a company that at one time in 2021 made more money on its bitcoin investment than from selling cars.

Tesla’s Musk Remains Open to Buying More Bitcoin After Selling in Q2 to Raise Cash: Tesla CEO Elon Musk said the EV company could add to its bitcoin position again in the future, but wanted to boost its cash position.

What Tesla’s Big Bitcoin Sale Means for Other Firms Putting Crypto on Their Balance Sheets: Corporations are likely to remain cautious on adding bitcoin to their corporate treasuries, but not because of Tesla’s move.

Is the Ethereum ‘Merge’ Driving This Rally?: A proposed date for the transition from a proof-of-work to proof-of-stake protocol signaled a return of optimism to crypto markets.

“Firstly, I would like to sincerely apologize for the panic that has been created by the sudden announcement of us pausing withdrawals. I understand that many of you are concerned and rightly so. I would like to be completely transparent with all of you who have put your faith in Zipmex, whether you’ve been a customer for a long time, or only just started with us recently. We’ve been facing some liquidity issues with counterparties that Zipmex had assets with. The tokens affected are BTC, ETH, USDC and USDT that were specifically in ZipUp+. As such we had to halt withdrawals while we recoup the rest of our funds. Regulators have been informed and are aware of our movements, as well as our investors.” (Email to Zipmex customers) … “If you sell 75% of your bitcoin, you will only have 25% of your #bitcoin left.” (MicroStrategy CEO Michael Saylor)