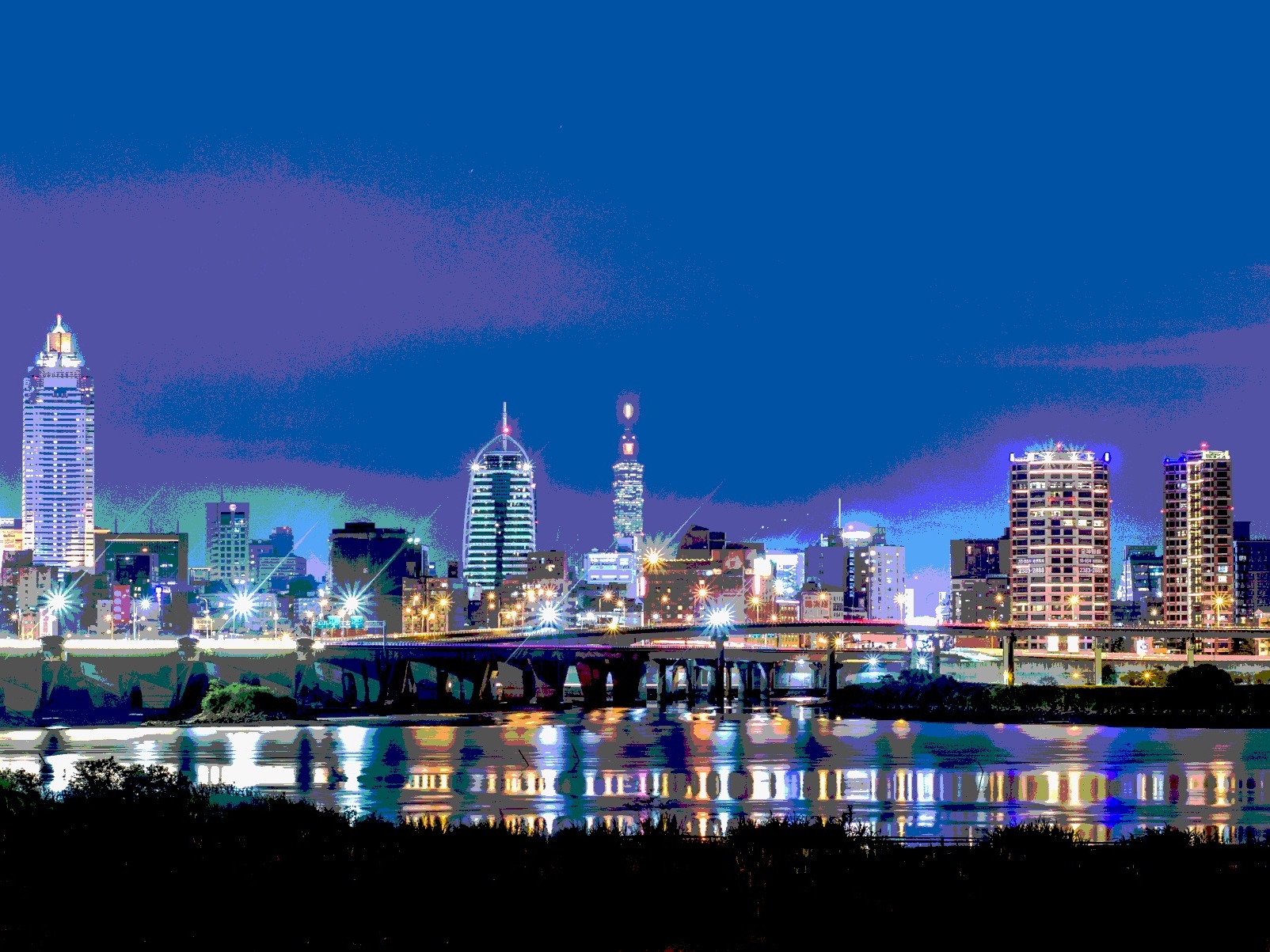 Prices: The U.S. Federal Reserve is nowhere near finished in its fight against inflation, while House Speaker Nancy Pelosi’s visit to Taiwan puts a damper on investor sentiment. Suddenly, the market for risky assets from bitcoin to stocks is under pressure again.

Insights: Sam Reynolds takes stock of the once-thriving market for non-fungible tokens, now apparently suffering through its own soft patch.

Bitcoin (BTC) slid below $23,000, dropping for a fifth straight day, diminishing hopes embraced as recently as last week that a fresh rally might be in the offing.

The decline in bitcoin and other cryptocurrencies mimicked similar movements in global markets.

Speculation was mounting last week that the Fed would ease off its inflation-fighting campaign after a report showing the U.S. economy had contracted for a second straight quarter, viewed by many traders as a sign of a recession (even though that’s not actually the definition).

Also Tuesday, there was further evidence of that weakness: The U.S. Labor Department published its Jobs Openings and Labor Turnover Survey (JOLTS), a report closely watched by Fed officials, showing that job openings fell by 605,000 in June, the largest monthly decline since April 2020, when the coronavirus pandemic hit businesses. 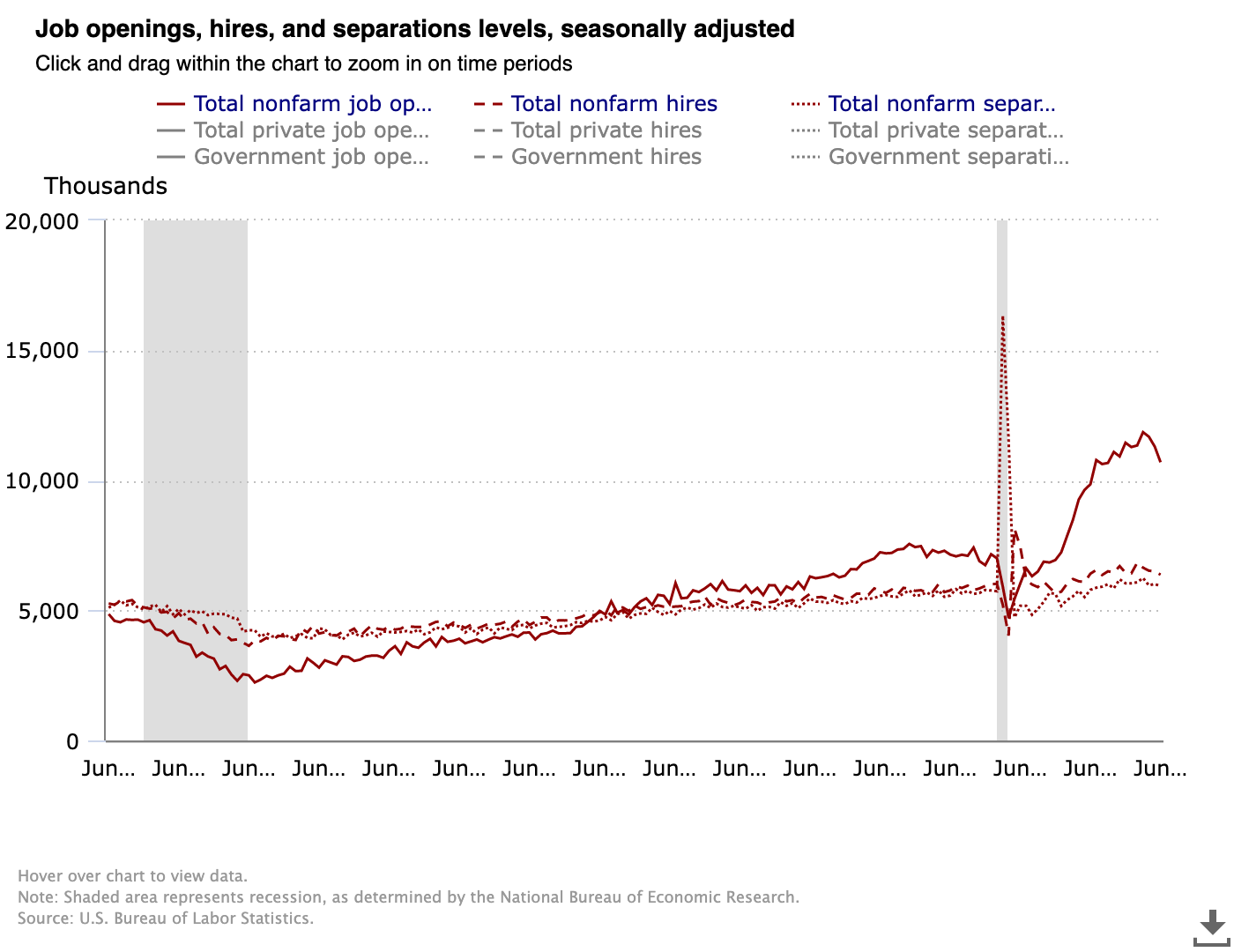 U.S. openings have rolled over, in a fresh sign of economic weakness. (Labor Department)

However, the jobs markets remained strong, and there were still 1.8 jobs for every unemployed person in June, suggesting the labor market is still at full employment – ostensibly giving the Fed the green light for another rate hike in September.

Mary Daly, president of the Federal Reserve’s San Francisco branch, said Tuesday the U.S. central bank is “nowhere near” finished with its efforts to combat inflation, according to a Bloomberg News report. Just like that, downward pressure was back on prices for risky assets.

Another factor in the bitcoin market was the reported visit by U.S. House of Representatives Speaker Nancy Pelosi (D-Calif.) to Taiwan on Tuesday. Some traders were fearful that the trip by this high-ranking official could ratchet up tensions between China and the U.S. and have negative effects on global markets.

“This is going to bring some some tension in the market but I don’t believe that the market itself is gonna react too strong,” Daniel Muvdi, head of markets at Quantfury, said Tuesday on CoinDesk television’s “First Mover/” program.

Ether (ETH) traded slightly higher during afternoon hours, up 2.19%, but the second-largest cryptocurrency by market value after bitcoin continues to search for direction after the Ethereum “shadow fork” went into effect one week ago.

“The Merge narrative on [Ethereum] has been getting a little cloudier,” said Joshua Lim, head of derivatives at Genesis Trading. “The complications around a proof-of-work fork could create some market dislocations and the geopolitics of Pelosi’s Taiwan visit are weighing on price.” (Genesis is owned by Digital Currency Group, which also owns CoinDesk.)

At What Point Can We Declare ‘NFT winter’?

Non-fungible tokens (NFT) had quite the dreary July as data from crypto aggregators show that most NFT exchanges had a sharp downtrend in active traders and dollar volume.

According to DappRadar, OpenSea lost 35% of its dollar volume and 15% of its traders during the month of July. Overall, the world’s largest NFT exchange by volume posted $517 million in volume during the last 30 days. 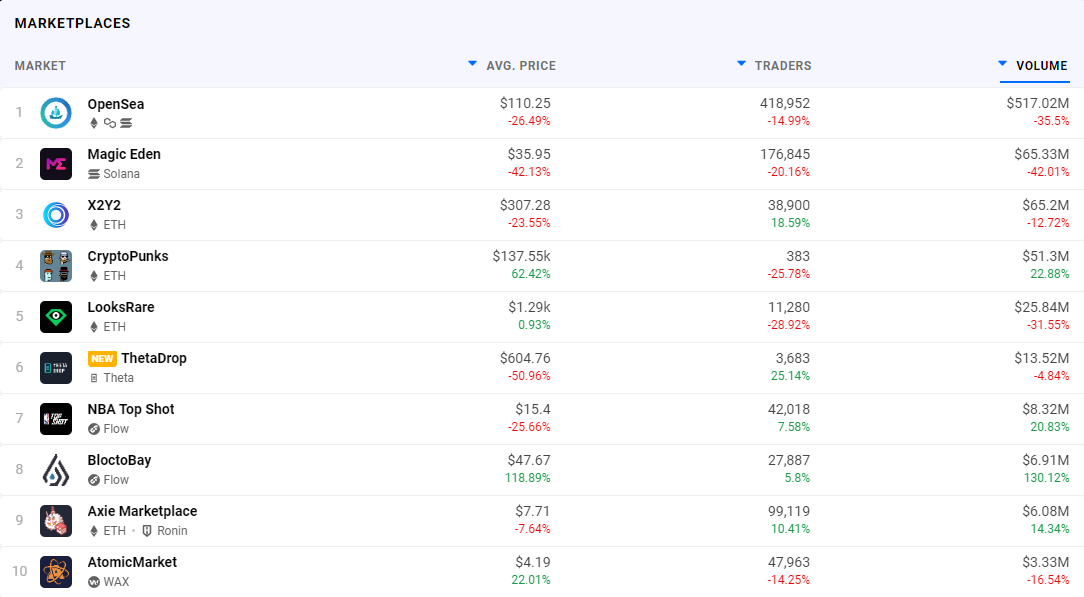 Nansen, another digital asset tracking service, reports that overall NFT volume on the month is down 17% to 448,000 ETH (or around $704 million). 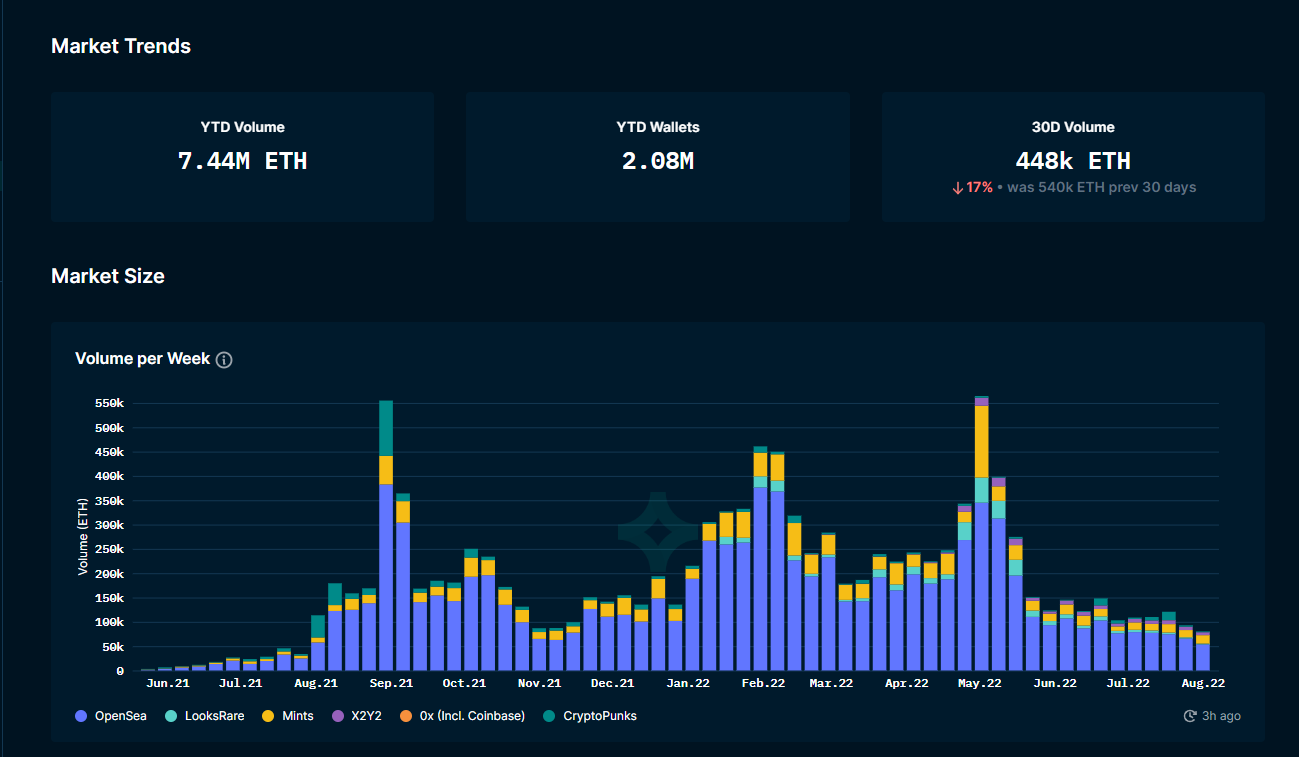 Removing wash trading, where a trader buys and sells an asset to feed misleading information to the market (a practice infamous for inflating the NFT market) from the equation – thanks to Nansen’s wash trading filter – and the 30-day volume shoots up over 2.5 times. 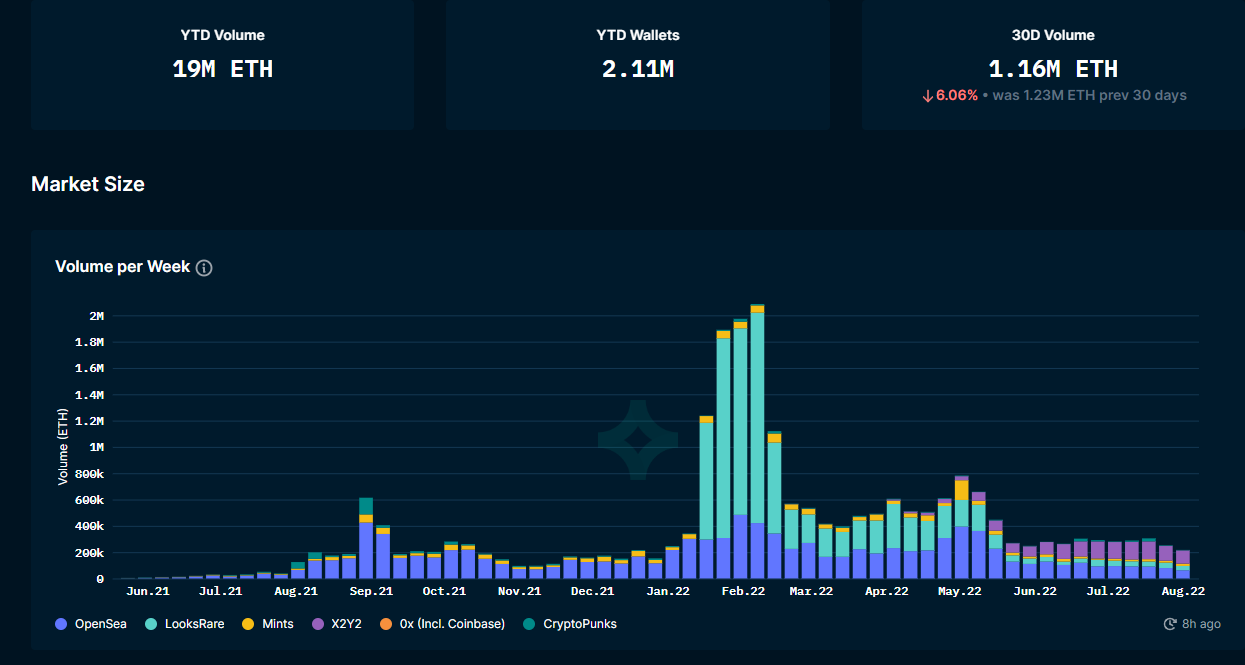 “It’s not just the [U.S. dollar] volume traded that has fallen. This is also the case for the number of buyers and sellers as well as the number of sales. These decreases come mainly from collectibles that have lost interest since the beginning of the year except for the ‘blue chip’ collections,” wrote NonFungible, an NFT analytics firm, in a recent report.

NonFungible believes that there’s a “centralization of the market” taking place around CryptoPunks, Meebits and Bored Ape Yacht Club, all owned by Yuga Labs.

The one exception appears to be Ethereum Name Service (ENS), which issues .eth domains for crypto wallets. As CoinDesk previously reported, there seems to be a mini-boom happening with tens of thousands of ENS registrations per day as opposed to thousands in May and June. Some analysts point to a mini gold rush for .eth domains the way there were for .com domains in the late 1990s and 2000s.

Hard to support a market for $1M JPEGs

Despite claims otherwise from the NFT community, the market is having a tough time supporting valuations that made headlines at the height of the bull market.

When trying to value Three Arrows Capital’s “Starry Night” wallet, which was targeting a $100 million NFT collection, CoinDesk reported there wasn’t a universally accepted way to get a number for its current valuation. Results came back across the spectrum from $19.7 million to $1.6 million. If a portfolio of assets could have such a variance in pricing, or drop so precipitously, is it possible to expect investor interest to be maintained?

One observation in the NFT market in the last month has been the floundering of art NFTs while high-profile utility NFTs like ENS has found legs.

Surely GameFi NFTs must have momentum?

While Axie Infinity has seen an uptick in volume, per DappRadar’s data, another data point looks to throw some shade on the market.

According to a survey of 2,400 GameFi investors conducted by ChainPlay, there’s still some hesitation in the market; most have lost money.

According to the survey, 89% of crypto investors worldwide saw their GameFi profits decrease in the last six months. Some 62% of respondents lost more than 50% of their profits from GameFi.

More concerning for stakeholders, perhaps, is that ChainPlay’s survey shows 73% of the respondents shy away from GameFi investments because they are afraid of rug pulls and Ponzi schemes.

Stats like these help explain why investor sentiment in NFTs is waning.

This edition of First Mover Asia was edited and produced by Bradley Keoun.

Chainalysis Estimates $2B Stolen From Cross-Chain Bridge Hacks This Year

Bank of England Raises Interest Rate by Most Since 1995