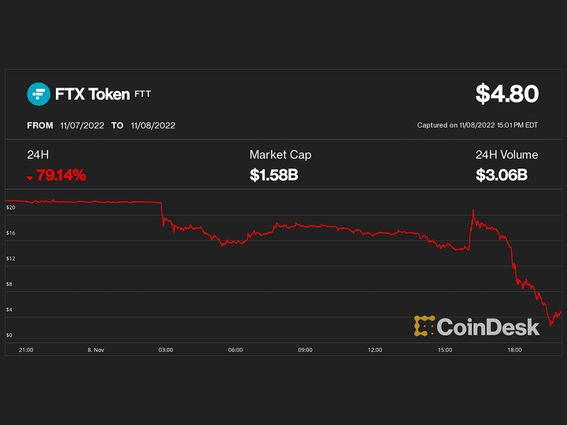 FTX's exchange token dropped to as low as $4 from $22 less than a day ago. (CoinDesk)

The FTX’s exchange token, FTT, went into free fall Tuesday even after the company got a lifeline from larger rival Binance, as fears mounted over the crypto trading firm Alameda Research’s financial woes, fueling what appeared to be contagion driving down prices broadly across digital asset markets.

Both Alameda and FTX are part of the billionaire Sam Bankman-Fried’s now-fast-dwindling crypto empire.

Broader crypto markets, which mounted a short-lived recovery after the bailout announcement, quickly lost steam and turned sharply lower. The CoinDesk Market Index (CMI), which tracks 162 cryptocurrencies, fell 8% in the last 24 hours. Bitcoin (BTC), the largest cryptocurrency by market capitalization, tumbled to $17,114 on the Bitstamp exchange, a 23-month low. The BTC price recovered somewhat to $18,400 but was still down 12% on the day.

Among the 500 digital assets in CoinDesk’s Digital Asset Classification Standard, some 95% were lower over the past 24 hours. 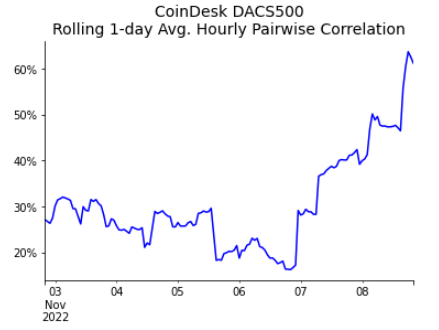 CoinDesk reported last week that Alameda Research’s balance sheet is loaded with highly illiquid FTT tokens, and is also a big holder of SOL tokens. Some of these tokens were put up as collateral to take out loans. As of June 30, Alameda held $3.66 billion of “unlocked FTT” tokens and $2.16 billion of FTT as collateral, while its SOL holdings totaled to about $1.2 billion, according to the documents reviewed by CoinDesk.

Investors fear that the giant Binance exchange’s bailout of FTX might not extend to Alameda, which is a significant market maker and lender in the crypto space, and that Alameda might face margin calls and be forced to fire-sell assets from its balance sheet to raise liquidity.

“There’s a lot more pain to go around as Alameda will be heavily affected by the crash of FTT,” Sheraz Ahmed, managing partner at Storm Partners, told CoinDesk. “A multi-billion dollar loss will hurt.”

Alameda’s rout could spell trouble for the broader crypto industry, including lenders exposed to the trading firm and to crypto ecosystems which Alameda and FTX have been heavily invested.

“Assuming Alameda doesn’t survive, there could be a good deal of pain, particularly for the Solana ecosystem – in which they were deeply involved – and any institutions that had lent to Alameda,” Riyad Carey, research analyst at crypto data firm Kaiko.

To illustrate just how spectacular the FTT token price’s collapse has been, take a look at the following chart of the 10 biggest laggards over the past 24 hours in the “Transparent CeFi Currency” industry group, within the CoinDesk DACS. The industry group includes digital assets “distributed by a central entity and backed by a centralized reserve treasury (i.e., corporation, government, CBDC’s, centralized exchange),” according to the definition. 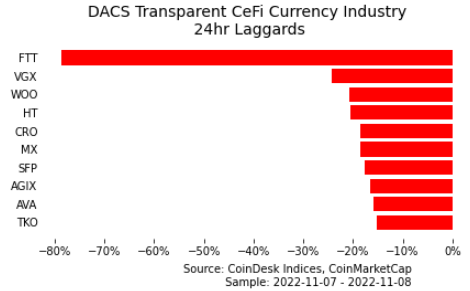 GitHub Copilot will enable developers to code using their voice

Flies smell the motion of odors and use it to navigate, study finds