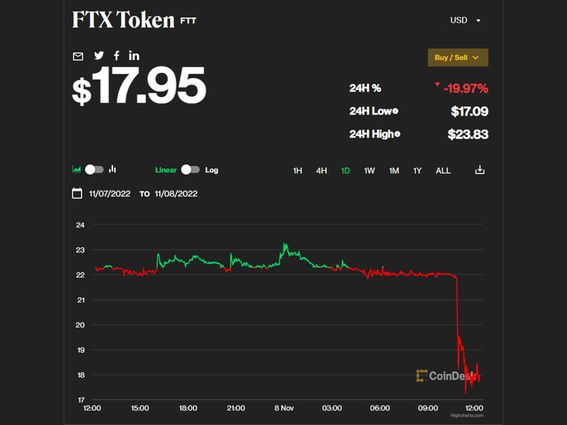 Fears over a withdrawal run from the billionaire Sam Bankman-Fried’s FTX cryptocurrency exchange sent digital-asset markets into a fresh tailspin on Tuesday, hitting altcoins including the trading venue’s own FTT as well as the Solana blockchain’s SOL.

In a departure from the stability witnessed earlier in the week, the tremors appeared to spread to bigger cryptocurrencies including bitcoin (BTC), down 4.6% in the past 24 hours, and ether (ETH), down 6.3% – on a day when U.S. stocks were trading higher. In crypto options markets, traders were putting on fresh transactions to protect themselves from further downside. The 162-member CoinDesk Market Index lost 5.2%.

The meltdown sparked eery recollections of the crypto market’s dizzying crash earlier this year, which was punctuated by the failures of the Terra blockchain’s UST stablecoin, the crypto lender Celsius Network, trading venue Voyager Digital and the investment fund Three Arrows Capital.

The fresh drama was magnified by Bankman-Fried’s reputation as one of the most powerful and hitherto successful industry figures, and came just days after none other than Changpeng “CZ” Zhao, CEO of the rival Binance exchange, said he planned to dump its remaining holdings of the FTT tokens.

As of press time the FTT was down nearly 14% over the past 24 hours and 44% over the past seven days, to a price of $18.92. Just days ago, the CEO of Bankman-Fried’s trading firm, Alameda Research, had tweeted that the outfit stood ready to buy the Binance holdings at $22 each.

Data from CoinGlass shows there continues to be building short bets on FTT as open interest in the crypto-derivatives market has surged 8% during the last hour to a total of $215 million.

The speculation over Bankman-Fried’s FTX started after CoinDesk reported last week that a notable portion of Alameda’s balance sheet was made up of FTT, which is the FTX exchange’s in-house token, and the Solana blockchain’s SOL.

Since then, the market has grown concerned about FTX’s liquidity. The exchange has faced a massive stablecoin exodus, with $451 million being sent off its main platform during the last week and $15 million being pulled from its U.S. subsidiary, according to Nansen data. Currently, FTX has a balance of $59.2 million USDC and $28.5 million USDT, along with $8.6 million BUSD. FTX US has $41 million USDC, $12.8 million USDT, $39 million PAX, and $11.3 million BUSD available.

Interest rates on FTX’s margin lending platform have jumped, with the exchange now paying 10% for USDT compared to a previous lending rate of 5%.

Meanwhile, Binance has seen an inflow of $411 million in stablecoins over the last week, with a current balance of $26.7 billion.

While users have reported some delays on fiat currency withdrawals, FTX says that it is working through the backlog and they are still being processed. Bankman-Fried, who serves as FTX’s CEO, took to Twitter early Monday to say the exchange was far from insolvent and there is no risk of withdrawals being halted.

Binance CEO Changpeng Zhao has previously said that he plans to liquidate any remaining FTT on Binance’s books, but on-chain data suggests that this hasn’t yet begun.