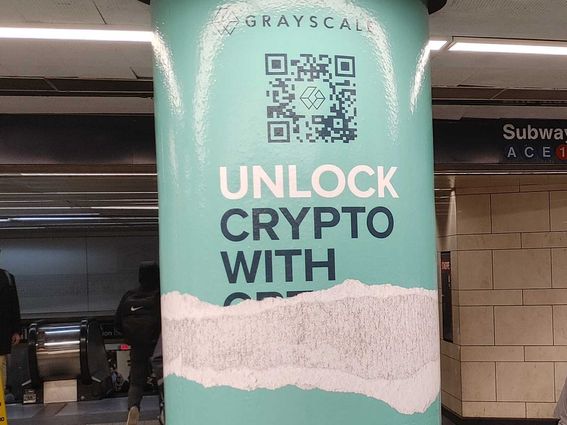 The closed-end trust with more than $10 billion in assets under management is up 17.5% to begin the year versus about a 5% advance in the price of bitcoin to its current $17,300. That’s brought the GBTC discount to NAV down to about 38% – the narrowest in eight weeks – after having closed out 2022 at a 45% discount. The discount touched a record 50% in December.

The discount to NAV began 2022 in the 20% area, and prior to early 2021 it was the norm for several years for GBTC to trade at an often sizable premium to NAV.

“The GBTC discount compressing may be the product of traders betting on either the complete unwind of the trust or Grayscale being forced to enable full/partial redemptions,” said Sean Farrell, head of digital asset strategy at Fundstrat. “However, it is tough to draw any conclusions just yet since volumes are so low and the market is so illiquid.”

Grayscale had applied to convert the GBTC into an exchange-traded fund that would theoretically provide a path for traders to arbitrage away the discount, but the U.S. Securities and Exchange Commission rejected the proposal earlier this year.

Immediately after the decision, Grayscale filed suit against the SEC, arguing that the agency’s logic for denying the application was “flawed” and “inconsistently applied.” The case is pending.

The "Grayscale discount," or the gap between the share price of the GBTC trust and the per-share value of the underlying bitcoin, has narrowed to its lowest point since mid-November. (YCharts)

Investors in the trust have recently put increasing pressure on Grayscale parent Digital Currency Group (DCG), headed by Barry Silbert, to address the massive discount. There are calls from a number of crypto-sector players for the trust to be liquidated, or at least for Grayscale to allow redemptions, which would allow GBTC investors to quickly realize the full value of their holdings. Hedge fund Fir Tree late last year filed a lawsuit against Grayscale, calling for the company to lower its fees and resume redemptions as a way to narrow the discount.

“Ironically any move towards NAV helps out Barry and the team since it is understood that they have significant GBTC and ETHE holdings, which could be sold for liquidity,” Farrell said.

Also possibly at work: investor positioning taking place around the start of the year.

Having grown fat in a number of one-way (mostly down) crypto trades last year, traders might be covering some of those bets as 2023 begins. Alongside the move in GBTC to start the year, there have been sizable rallies in the stocks of crypto exchange Coinbase (COIN) and bitcoin miners Marathon Digital (MARA) and Riot Platforms (RIOT) – all three of which tumbled 75% or more in 2022.

DCG is the parent company of CoinDesk.

BusinessArgo Blockchain's Bitcoin Mining Margin Widens Most In at Least a YearJan 11, 20232