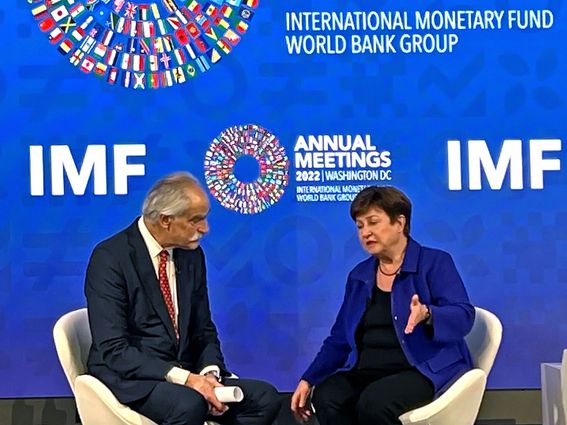 Washington, D.C. — The head of the International Monetary Fund said Wednesday central banks should refrain from currency interventions, instead suggesting they use interest-rate raises as the preferred tool for combating foreign-exchange weakness versus the dollar.

“Do not waste your reserves to protect your currency,” IMF Managing Director Kristalina Georgieva said during an on-stage discussion at the organization’s annual meeting in Washington, D.C. “When your currency is depreciating because of this mismatch of fundamentals, if you throw your reserves to defend it, the only thing you’ll get out of it is a weak position for the future.”

Emerging-market currencies have been roiled by a strengthening dollar as the Federal Reserve raises interest rates to combat rising consumer prices in the U.S. Because so many countries are dependent on imports, higher local prices for international goods – often denominated in dollars – have triggered bouts of inflation around the world. A stronger dollar also makes it harder for emerging-market countries to repay dollar-denominated debt because taxes are usually assessed in the local currency.

Such foreign-exchange fluctuations are closely monitored by some bitcoin traders because the largest cryptocurrency’s price is inversely correlated with the U.S. dollar’s strength in foreign-exchange markets.

‘Do not fight a battle you cannot win’

Georgieva noted that some countries had raised their interest rates to stay in lockstep with the Fed’s hikes. In general, when a country has a higher interest rate, its domestic bonds are more attractive to global investors, a dynamic that in turn leads to a stronger exchange rate.

The Bank of Mexico, for example, raised its interest rate for an 11th time in September in an attempt to a range of 8.5% to 9.25% in an attempt to tame inflation, which is currently at 8.8%, slightly higher than in the U.S. As a result, the Mexican peso (MXN) has held up much stronger against the U.S. dollar (DXY) than other emerging market currencies.

“We actually have seen a number of emerging markets that have been quite proactive to assess the direction that the economy was taking and increase interest rates before the Fed,” Georgieva said.

The Colombian peso, on the other hand, fell recently after Colombia’s central bank delivered a smaller than expected rate hike.

“Actually what she is saying is very important,” said Dick Bove, chief financial strategist at Odeon Capital. “She is basically arguing that the Fed will not ease and that the dollar will continue to rise. So do not fight a battle you cannot win.”

Because the U.S. dollar is the world’s reserve currency, the Federal Reserve is by default “the central banker to the world,” Bove said, which means that if the Fed tightens, all other major central banks must follow suit if they want their country’s currency to remain on the same level as the dollar.

The perplexing question of how central banks respond to a strong dollar could become a factor in crypto markets, if indirectly. Bitcoin (BTC) is inversely correlated with the dollar’s strength in foreign exchange markets, so if central banks fight back against their weakening foreign-exchange rates the cryptocurrency might benefit.

There’s also speculation going back years in crypto circles that people in emerging markets might turn to digital assets like bitcoin as a safe haven if they’re seeing high inflation or economic turmoil in their home countries.