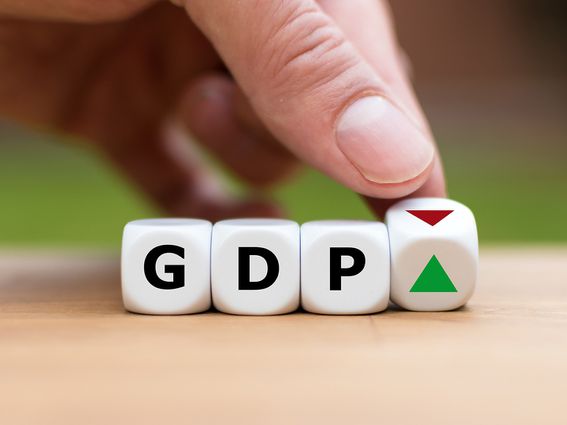 After two quarters of contraction in the U.S. economy, one might think traders would be hoping for green shoots. But in the current good-news-is-bad-news market climate, the opposite is true.

Economists estimate that U.S. gross domestic product (GDP) rose at an annual rate of 2% in the third quarter on a seasonally adjusted basis, according to FactSet. GDP contracted by 1.6% in the first quarter and 0.6% in the second quarter, prompting speculation as to whether the economy had entered a recession.

While the positive data might seem encouraging for workers, it could be a negative signal for crypto traders because it would show the Federal Reserve the economy is strong, in turn implying the U.S. central bank needs to keep raising interest rates to cool down inflation. And this year the Fed’s rate hikes have depressed prices for risky assets, from stocks to cryptocurrencies. In other words, a quarter of growing GDP would confirm the economy is in good enough condition to withstand further monetary tightening by the central banks, even if markets are hurting.

“The market wants to see the Fed slowing down with interest rate hikes, and for that to happen the Fed needs to see the economy slowing down to a point where growth slows and inflation looks like it’s trending down,” Joe DiPasquale, CEO of BitBull Capital, said.

The Fed has been raising interest rates sharply as it attempts to suck money out of the economy to slow down spending; the main U.S. inflation rate was 8.2% in September on a year-over-year basis, still close to the highest levels in four decades.

“I do think the Fed will remain steadfast on their consistent emphasis on inflation reduction over the next quarter and even beyond as they continue to push rates higher next week,” said Howard Greenberg of Prosper Trading Academy.

The monetary tightening has caused suffering in financial markets, including cryptocurrencies, with bitcoin (BTC) down more than 70% from last year’s all-time high around $69,000. Other crypto assets are performing similarly.

It seems bizarre to argue, but crypto traders might rather see a recession come on sooner than later.

“For crypto, and the broader markets, a negative GDP will prove bullish in the mid-term until we learn more about the Fed’s perception of the economy,” DiPasquale said.

Fed officials signaled at a meeting last month that, on average, they expect the unemployment rate to rise to 4.4% next year, from about 3.5% now. Such an increase would imply the loss of millions of jobs and a significant slackening in the economy – a meaningful deceleration from what appears to be the current pace of activity.

Said Edward Moya, senior markets analyst at foreign exchange Oanda: “A bad miss with GDP could be the catalyst needed to take bitcoin out of its trading range and well above the $20,000 level.”

After likely raising the benchmark interest rate to a range between 3.75% and 4% at its next meeting Nov. 1-2, Fed officials have signaled they might begin to move at a slower pace after that.

San Francisco Fed President Mary Daly said Thursday that “the time is now to start planning for stepping down.” A positive GDP report, however, could encourage central bankers to keep marching on.

“I think that the Fed remains on path to raising rates until the demon of inflation is slain,” said Scott MacDonald, chief economist at Smith’s Research & Gradings. “I expect growth to be around 2.5%, which will not be enough to persuade the Fed to pivot.”

CME to Roll Out Euro-Denominated Bitcoin and Ether Futures on Aug. 29