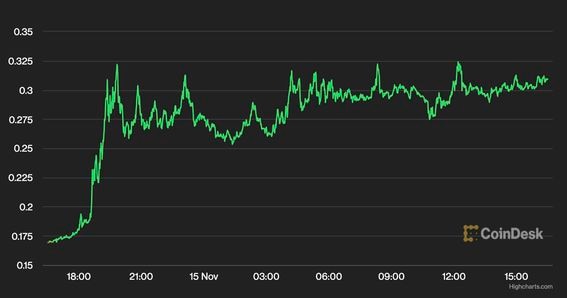 Serum, a decentralized exchange protocol on the Solana blockchain, saw its SRM tokens soar in digital-asset markets Tuesday, as key backers of the project rallied around an emergency fork in response to the recent hack of Sam Bankman-Fried’s ailing FTX exchange.

The community forked the project – blockchain–speak for essentially copying the underlying software code and starting afresh – after warnings that security may have been compromised by the Nov. 11 hack.

The alarms had sent the SRM price plummeting, ranking the token among the biggest losers in crypto markets. The rebound turned the token into one of the biggest winners overnight.

The serum (SRM) price started soaring around 23:30 UTC Monday, reaching a high of 32 cents Tuesday, up from a low of 12 cents on Sunday. As of press time, the token had settled back to 29 cents. It’s still down 95% in the past year.

Jupiter Aggregator, a key liquidity aggregator for Solana DeFi, which plugs into Serum, tweeted Tuesday that it was already testing an integration of the new version and “will announce it as soon as it’s ready.”

The price jump was likely due to the community “rallying behind a fork,” though it’s “unclear how the SRM token would fare if the fork gains traction,” Riyad Carey, an analyst with the crypto analysis firm Kaiko Research, told CoinDesk.

Kaiko had noted in a research report Monday that the SRM tokens had suffered a sharp drop in market depth on crypto exchanges last week triggered by the collapse of Bankman-Fried’s crypto empire, including the FTX exchange and trading firm Alameda Research.

That dynamic appeared to shift Tuesday: Based on the total number of SRM tokens on the Serum order book, SRM’s liquidity on Binance is now higher than pre-crash, according to Clara Medalie, director of research at Kaiko.

Medalie told CoinDesk that market makers have been “building up support on Binance for SRM since the crash.” 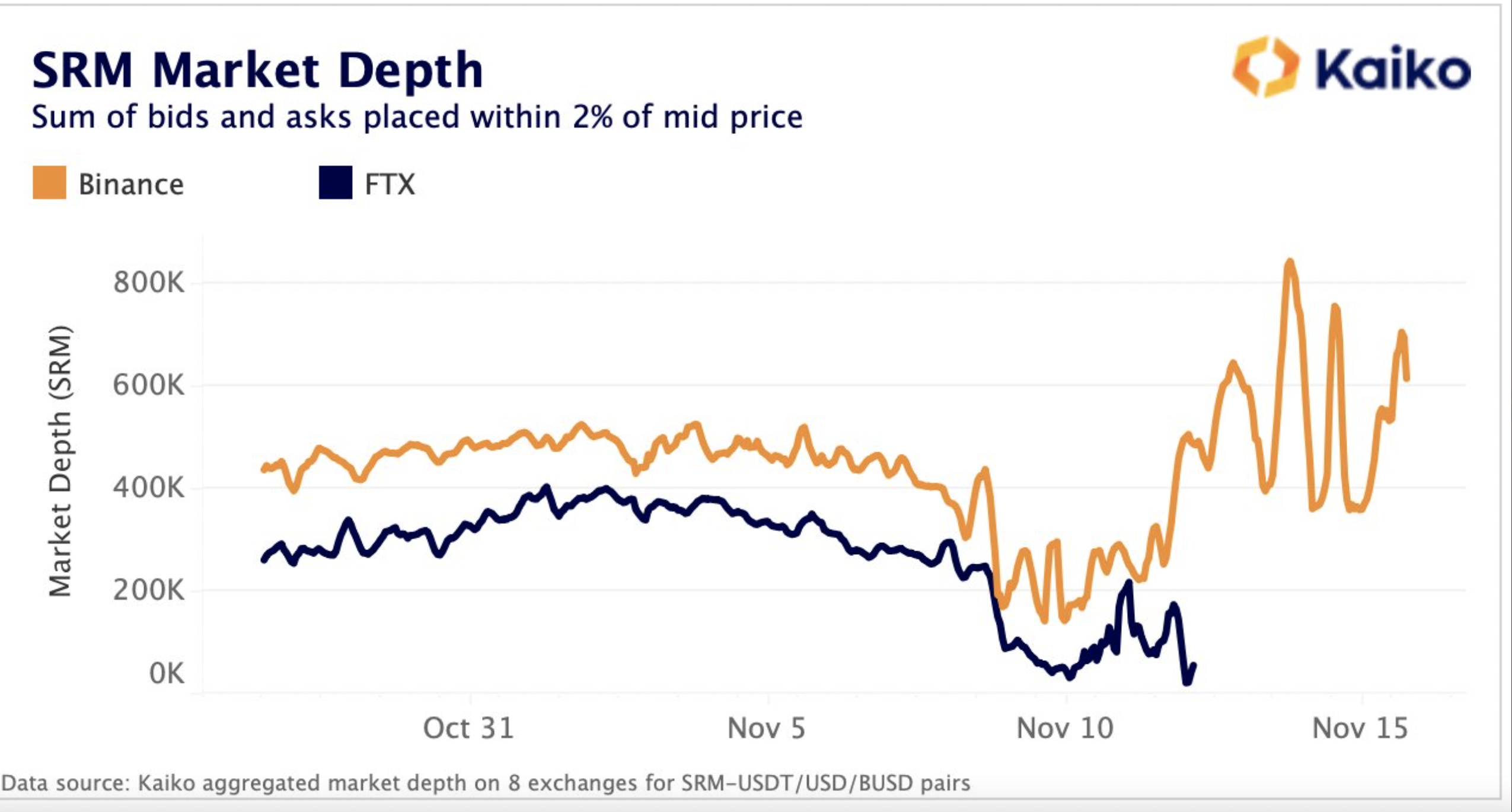 “Market makers are moving funds to Binance to support price,” she said. “Liquidity evaporated on nearly every other exchange.”

Solana co-founder Anatoly Yakovenko tweeted Nov. 12 that developers depending on Serum forked the program because “the upgrade key to the current one is compromised.” He said that “a ton of protocols depend on Serum markets for liquidity and liquidations.”

The effort to replace Serum with a community-led open-source version has renewed the market’s interest, according to Brian Long, a prominent validator, in a tweet.

The FTX-Alameda fallout last week has pushed the Solana community to the edge. The Solana Foundation said Monday it held 134.54 million SRM tokens and 3.43 million FTT tokens on FTX when withdrawals went dark on Nov. 6.

Solana-based applications have also seen nearly $700 million in value wiped out, with a 70% drop from the $1 billion in total value locked (TVL) on Nov. 2 when CoinDesk first reported on Alameda’s troubling balance sheet.

Solana’s native token SOL saw a minor rebound on Tuesday, up 6% to around $14 Tuesday. The CoinDesk Market Index was up 2%.

Medalie said that a sudden price jump for SRM may not be a strong indicator in terms of future price movements because “there is still a large gap that Alameda left.”

In new book, doctor sees humanity devouring itself and the planet