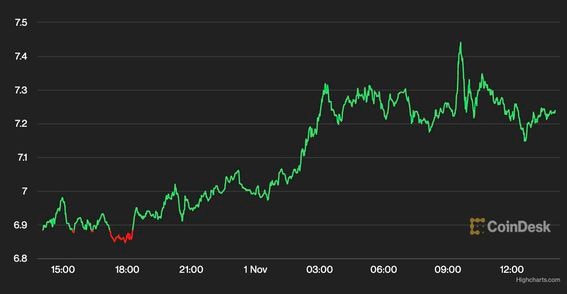 Dogecoin isn’t the only alternative coin outshining bitcoin. Decentralized exchange (DEX) Uniswap’s UNI token was recently up 5.1% over the past 24 hours and has risen more than 10% during the past week despite mixed news highlighting its expansion but also its alleged popularity among scammers.

UNI also rose more than 16% in October. Its surge coincides with a more dramatic late-October spike by DOGE, which was recently trading over 13 cents, a more than 10% gain from Monday, same time, and its highest point since late April. The popular meme coin rose more than 100% in October, most of the increase occurring in the last week of the month as billionaire entrepreneur Elon Musk neared completion of his purchase of Twitter.

Meanwhile, bitcoin (BTC) and ether (ETH), the two largest cryptocurrencies by market capitalization, spent a second consecutive day trading sideways, albeit tinted more green than red. BTC was holding comfortably over $20,000, its most recent support line, while ether continued to hover over $1,500, where it climbed last week.

Uniswap has “a very high market share of volume,” which is “benefitting disproportionately compared to other DEX tokens,” said Lucas Outumuro, head of research at crypto data and analysis firm IntoTheBlock.

But Twitter has been buzzing over the past two days about a Jan. 20 report that 97.7% of tokens launched on Uniswap were rug pulls – meaning the developer attracts investors to a new cryptocurrency project but then pulls out before the project is built.

Crypto investors will be scrutinizing the Federal Open Market Committee’s latest interest rate decision on Wednesday, with expectations running high for a fourth consecutive 75 basis point hike. They have become more optimistic over the past week the U.S. central bank will tamp down its hawkishness early next year – or even before – amid faint signs that the economy may not be headed into a steep recession, although a number of major investment banks have diverged from this view.

In a note on Telegram, digital asset fund QCP Capital noted “markets shifting expectations towards a dovish outcome at the upcoming meeting,” but also its concerns “about a negative market reaction to persistent hawkishness from the Fed.”

Kaiko’s Carey said that Fed silence on interest rate retrenchment “could be a roadblock in the ongoing rally” for BTC.