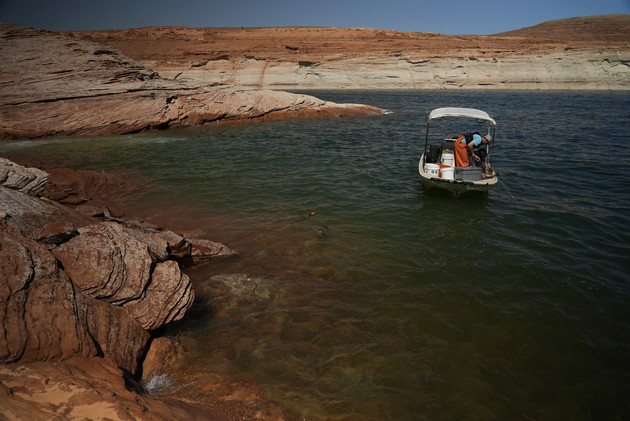 Entrenched drought and chronic overuse have driven water levels on the Colorado River so low that the Biden administration may be forced to impose massive cuts to water deliveries in seven Western states — a politically perilous move certain to inflame tensions with farmers, tribes and cities.

Federal officials have given the states until Aug. 16 to come up with a plan to swiftly conserve as much as a third of the river’s flows, the amount they believe is necessary to keep Lake Powell — a key reservoir along the Arizona-Utah border — from reaching disastrous levels next year. But the pain of the potential solutions is so huge that the states are struggling to reach a deal, according to eight people familiar with the discussions.

Now, the Biden administration must decide whether to step in to make the unpopular choices instead.

The solutions could include politically incendiary steps that previous administrations have only threatened: making steep cuts to water deliveries that would hit tribes and cities first, telling farmers how they can use water that they legally own, or cutting water deliveries across the board, which could get tied up in court. But inaction could lead to worse consequences: hydropower turbines crucial to the stability of the Western electrical grid grinding to a halt, cities from Phoenix to Los Angeles losing a major source of water, large swaths of highly productive farmland drying up and a Grand Canyon with no water flowing through it.

“It’s all risks,” said John Fleck, a water policy professor at the University of New Mexico. “I don’t see anything that’s not a risk. It’s all bad options at this point.”

Even before the current, 22-year drought gripped the basin, farmers, ranchers, cities and industries were using more water than the Colorado River reliably carried each year. But climate change has shrunken the river’s flows roughly 20 percent in the past two decades, and scientists predict they will shrink nearly 10 percent more with each additional degree of temperature rise. The 250,000 square mile basin is aridifying, with soil now so dry that, when rain falls or snow melts, the water is quickly soaked up by the ground before it can make it to the river.

The speed with which the crisis has unfolded on the Colorado River is testing a region that has, for the past two decades, overwhelmingly been a climate adaptation success story. The states and other major players have come to see their fates as tied and have opted to work together rather than duke it out in court to preserve their share of shrinking supplies.

But now, states are struggling to agree.

Colorado, Wyoming, Utah and New Mexico offered no tangible water reductions in a plan they put forth in July, arguing that they are already using far less than they’re entitled to and have limited abilities to reduce use quickly. Instead, they’re pointing their fingers at the Lower Basin states of Arizona, California and Nevada, insisting they must act first.

Nevada uses only a small share of the river’s water and has made great strides in conservation, but Arizona and California are still far from a deal, hobbled by their own internal politics and the knowledge that the need — and expense — of saving massive quantities of water won’t end after just one year.

The federal government has, in the past, threatened to act unilaterally if states can’t reach a deal. The Interior Department holds ultimate authority over Colorado River deliveries in the Lower Basin and, through its Bureau of Reclamation, controls key infrastructure up and down the river. The threat of federal intervention by the Bush administration prodded states into agreeing on new operating guidelines in 2005, and a threat from the Trump administration helped carry a 2019 deal among the states to cut water use across the finish line.

In June, Bureau of Reclamation Commissioner Camille Touton issued the Biden administration’s ultimatum to states: Develop a plan to save 2 million to 4 million acre-feet of water next year or the federal government will step in. She set a mid-August deadline, which is when a key set of projections will be made public determining how much water will be released out of reservoirs in 2023.

Interior declined to make Touton or her boss, Assistant Secretary of Interior for Water and Science Tanya Trujillo, available for an interview.

In a written statement, Interior spokesperson Tyler Cherry said only that department leaders “are hard at work with Basin states to release the updated 24-month study and operating conditions for the Colorado River Basin by August 16.”

In a system so altered by drought and climate change, water managers are finding that half measures don’t get them very far.

Take, for instance, what happened in May. With water levels at Lake Powell dipping dangerously low, the Bureau of Reclamation took emergency action by holding back water due to be released from the dam to downstream users and releasing more water into Lake Powell from an upstream dam.

But less than two weeks later, half of that extra water effectively disappeared when the bureau updated its hydrological forecast and found that the river was actually likely to carry far less water than previously projected.

Lake Powell levels are now dipping close to the point at which engineers aren’t sure they’ll be able to safely keep hydropower production running and water deliveries moving at the necessary scale. The only solution is massive cuts in water use, said Terry Fulp, who served as the Bureau of Reclamation’s top official for the Lower Basin for eight years before retiring in 2020.

Fulp said he thinks the Interior secretary, who ultimately holds the federal authority over Colorado River issues, will only accept actions that conserve water at the scale laid out by Touton in June.

“I don’t believe the secretary can afford, nor will take the position of, ‘I accept it and it’s potentially not enough.’ There’s not time to do that. There’s not the space — decision making space — to do that. It’s going to have to just be done,” he said.

If the states can’t, or won’t, act swiftly enough, the Interior Department could pull on any combination of powerful levers at its disposal to stanch water use and keep more water behind the dam. But each of those levers comes with its own set of political landmines, and all are apt to produce a legal quagmire that could tie the federal government’s hands during the near-term crisis.

Technically, water deliveries for cities and tribes in Arizona are first on the chopping block. Under Western water law, users with the oldest water rights are entitled to their full allotment of water before newer, junior users get a drop. Since farmers led the settlement of the West, the lion’s share of senior water rights are held by agriculture, which uses roughly three-quarters of the Colorado River’ water. Cities typically hold junior, lower-priority rights.

But water users broadly agree that simply cutting off cities wouldn’t be a fair move, and few expect the Biden administration to make it.

Instead, the cleanest way to share the pain might be for Interior to shave water off all of its water deliveries.

In the Lower Basin, lawyers say it would be a fairly simple exercise, since water users there must have contracts with the Bureau of Reclamation that contain emergency provisions.

But spreading the pain to the Upper Basin states of Wyoming, Colorado, Utah and New Mexico is more complicated. Since the farmers and cities that use the water sit upstream of Lake Powell, Interior can’t just turn down the faucet. Instead, it would have to rely on state-level officials to implement any delivery cuts Interior called for — something those officials aren’t at all certain to agree to.

Alternately, the Bureau of Reclamation could put the burden of cuts on the handful of federal water projects that it does hold the rights to in the Upper Basin, including the tunnels that deliver water across the Rocky Mountains to Fort Collins, Boulder and other Colorado cities.

Then there’s the authority no one really wants to talk about: Telling farmers, ranchers and other water users how they can use water that they’re legally entitled to.

Under the terms of a 1963 Supreme Court decision, the Interior Department has the right to define what is — and isn’t — a “beneficial use” of water. That’s a threshold term upon which all water rights are based.

The Bush administration wielded this authority in 2003 when it was trying to force a powerful California agricultural district to reduce its water use so that supply cuts wouldn’t be borne entirely by San Diego, Los Angeles and other Southern California cities. Then-Interior Secretary Gale Norton launched an investigation of the Imperial Irrigation District’s water use that concluded farmers were wasting large quantities of water, and recommended subtracting those quantities from the district’s permanent allotment.

Legal experts speculate the Biden administration could now use that same authority to effectively mandate that all farmers and ranchers receiving federally delivered water tighten their conservation practices by improving irrigation techniques, lining canals — or even switching from water-intensive crops like alfalfa to less water intensive ones.

Doing so could conserve large amounts of water, but would be the equivalent of setting off a political bomb in farm country, particularly for a Democratic administration.

“It’s worth remembering that the people that did that to Imperial were conservative Republicans,” said Robert Glennon, professor emeritus at the University of Arizona’s College of Law. “It was kind of a Nixon goes to China moment.”

States and the federal government still hope they can hash out a deal that allows them to avoid this unsavory set of options, though. The people familiar with the talks say negotiations remain active.

All sides agree that a deal crafted by the states is the best option, and multiple people said the department now appears willing to give negotiators more time.

How long, though, is unclear. The longer it takes to start conserving water, the more likely it is that reservoir levels continue to plummet, leaving water managers with fewer and fewer options for heading off disaster.

The negotiations got a big, last-minute boost with the massive, Democrats-only climate and health care spending bill the Senate approved on Sunday.

Western Democrats secured inclusion of $4 billion for the Colorado River that would allow the Bureau of Reclamation to pay users to voluntarily forgo water use or to restore ecosystems affected by drought — an explicit nod to California’s Salton Sea, where an unfolding environmental crisis stands to be exacerbated if the Imperial Irrigation District reduces its water use. That issue has long been a major hurdle in getting California, the river’s largest water user, to agree to delivery cuts.

Experts warn that time is running out.

“To the extent that we don’t cut our use dramatically, we’re risking dancing with dead pool,” said Fleck, the water policy professor at the University of New Mexico, referring to the point at which water levels are so low no water can be released from Lake Powell, one of two main reservoirs on the river.

“There are, frankly, people within the system who are ready to throw up their hands and say, ‘Let’s just crash it and rebuild from the start,’ because this process we’re in right now is not getting us to where we need to be,’” he said.