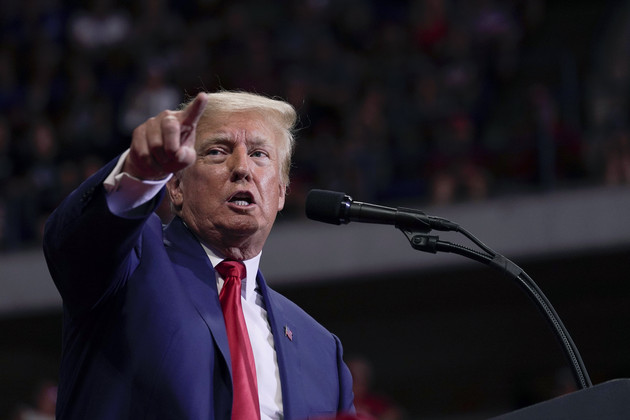 Some of his lawyers have represented celebrities, including Waka Flocka Flame and Courtney Love. One of his attorneys works at a firm that lists one of its specialties as RV law. Others still have extensive white-collar defense backgrounds and prosecutorial careers. | Mary Altaffer/AP Photo

Donald Trump’s career has been defined by legal fights and the eclectic crew of lawyers who’ve waged them. That’s never been more true than since he left the presidency and his legal woes have metastasized.

Some of his lawyers have represented celebrities, including Waka Flocka Flame and Courtney Love. One of his attorneys works at a firm that lists one of its specialties as RV law. Others still have extensive white-collar defense backgrounds and prosecutorial careers.

Now they’re representing a former president caught in a mixture of criminal matters related to the 2020 election, his retention of documents marked highly classified, alongside a wide range of civil lawsuits.

Some of Trump’s former attorneys have accused him of not fully paying them for their services. It’s not clear what all his current attorneys will cost, though the tab for some of the legal battles has been covered, in part, by the Republican National Committee and his Save America political action committee, according to CNBC.

Here’s a rundown of the people known to be representing Trump in his current messiest fights:

The Department of Justice is investigating Trump’s handling of documents marked classified that were stored at Mar-a-Lago. Trump sued to demand an outside review of the materials seized from his estate last month. Here’s who is representing him in the matter.

Corcoran has been scrutinized for his early contacts with the National Archives, as the government attempted to recover highly classified documents housed at Mar-a-Lago.

He was also present when FBI agents and a DOJ lawyer visited Trump’s property in June. At that meeting, according to a court filing from the Justice Department, an unnamed custodian of Trump’s records — reportedly former One America News anchor Christina Bobb –– provided the agents and DOJ lawyer with a signed letter stating that all documents marked classified had been returned.

And, according to the same court filing, Corcoran said there were no records stored anywhere other than a storage room. But when FBI agents executed a search warrant at Mar-a-Lago earlier this summer, they found documents marked as classified in Trump’s personal office.

Lindsey Halligan: Halligan is a Fort Lauderdale-based attorney serving as local counsel for Trump in the Mar-a-Lago litigation. She was one of the only lawyers working for Trump who was on site at his estate during the execution of the FBI search.

Christopher Kise: Kise, a former Florida solicitor general who has won four cases before the Supreme Court, has been a longtime adviser to Florida Republicans including Gov. Ron DeSantis and former Govs. Rick Scott and Charlie Crist (Crist has since joined the Democratic Party and is now challenging DeSantis in the race for Florida governor). He recently joined Trump’s Mar-a-Lago legal team and argued successfully before U.S. District Court Judge Aileen Cannon for the appointment of a special master in the case.

James M. Trusty: Trusty, a D.C.-based former federal prosecutor, has signed several of Trump’s filings in the special master litigation and did most of the arguing before Cannon. He previously oversaw gang prosecutions at Justice Department headquarters.

Christina Bobb: It’s unclear if Bobb is doing any legal work for Trump on this or any other matter. But she was on-site during the FBI search, interacting with agents and communicating with Trump’s broader legal team during the nine-hour raid. She’s presented herself as a member of Trump’s legal team in television interviews since the search of Mar-a-Lago but hasn’t formally appeared in court to represent Trump.

Bobb, a former OANN anchor with longtime ties to Trump world, has been involved in multiple Trump-related legal and political battles, including efforts to challenge the results of the 2020 election. She was reportedly in the Willard Hotel with top Trump allies as they monitored efforts to subvert the election outcome in the lead-up to the electoral college certification.

New York Attorney General Letitia James’ civil investigation is looking at how Trump and his companies calculated the value of their assets. Here’s who is representing Trump in the matter.

Ron Fischetti: Fischetti, who has a decades-long career in New York criminal defense, represents Trump in that probe. Years ago, he also represented Courtney Love.

Alina Habba: A Bedminister, N.J.-based attorney, Habba has emerged as a prominent spokesperson for Trump and his legal team, appearing on Trump-friendly news outlets to rail against the investigations he faces. Habba is representing Trump against James’ probe of the business practices of the Trump organization.

Habba has also become a spokesperson of sorts for Trump in the Mar-a-Lago case. She said in recent interviews that Trump frequently hosts guests in the club’s office where FBI investigators found highly classified documents. She also revealed in the New York litigation that she scoured Mar-a-Lago for records related to that lawsuit just days before the Justice Department issued a subpoena for records marked classified held at the resort.

An Atlanta-area district attorney is probing Trump’s effort to overturn the 2020 election in Georgia, potentially in violation of multiple state and local laws. Here’s who is representing Trump in the matter.

Jennifer Little: Little, a former prosecutor in nearby DeKalb County, has spent the bulk of her career as a white-collar criminal defense attorney, defending corporate and political clients.

On top of the Mar-a-Lago case, the Justice Department is also probing efforts by Trump and his allies to subvert the 2020 election, including the recruitment of so-called “alternate electors.” Top Trump aides have testified before a federal grand jury as part of the DoJ investigation.

Corcoran: In addition to his work on the Mar-a-Lago search, Corcoran has played a role in discussions between Trump and the Justice Department regarding potential privilege issues in the investigation into efforts by Trump and his allies to overturn the 2020 election.

Kise and Trusty: The two lawyers are also working on Jan. 6 Justice Department issues for Trump, according to a person familiar with the matter.

The House Ways and Means committee sued in federal court in an effort to get several years of Trump’s tax returns as part of a lengthy probe into the former president’s finances. Along the way, they’ve faced off against these Trump lawyers.

William Consovoy, Patrick Strawbridge, and Cameron Norris: The three lawyers from the firm Consovoy McCarthy represent Trump in long-running litigation with the committee. The panel has been trying for years, without success, to get Trump’s tax returns. All three men clerked for Supreme Court Justice Clarence Thomas.

Trump sued former Secretary of State and presidential campaign foe Hillary Clinton earlier this year in a sprawling RICO action that aired a collection of his long-held grievances against Democrats and federal investigators. The defendants also include a slew of current and former Justice Department and FBI officials. Here’s who is repping Trump in this matter.

Habba and Michael T. Madaio: In addition to her work in the New York litigation, Habba is the lead attorney in the wide-ranging lawsuit against Clinton and dozens of figures associated with the investigation of Russian interference in the 2016 election — as well as ties between the Trump campaign and Russia. The lawsuit, filed in the same South Florida federal court district where Cannon sits, reads primarily like a political diatribe.

In the months following the Jan. 6 attack on the Capitol, Trump faced a barrage of lawsuits — from Capitol Police officers and members of Congress — seeking damages. He turned to Jesse Binnall for help.

Jesse Binnall: Binnall has represented Trump and the Trump campaign in six of these lawsuits. He previously worked on the defense team of former Trump national security adviser Michael Flynn as Flynn unraveled his guilty plea. His co-counsel in the case was Sidney Powell, who later played a critical role in pushing Trump to object to the 2020 election results. Binnall also worked on election-related lawsuits after the 2020 election.

One focus for Trump and his allies has been pushing back against a letter signed by a host of former U.S. intelligence and national security officials in the final weeks of the 2020 campaign. The letter said that material reportedly from Hunter Biden’s laptop had “all the classic earmarks of a Russian information operation.” The New York Post reported on the laptop at the time. Years later, The Washington Post and The New York Times authenticated emails from the laptop.