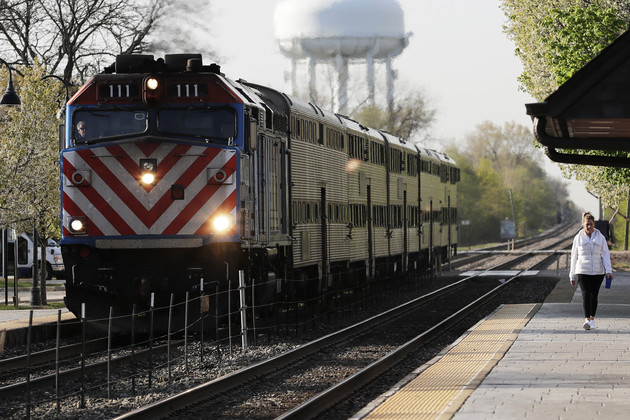 A Metra train arrives as a woman walks on Metra platform at the Glenview Amtrak/Metra Station in Glenview, Ill., Wednesday, May 13, 2020. | Nam Y. Huh/AP Photo

Amtrak said Wednesday that it will shut down all long distance trains starting Thursday, and commuter rail lines around the country are bracing for their own potential shutdowns starting Friday if contentious negotiations between freight rail companies and their unions lead to a work stoppage.

Most of Amtrak’s long-distance route network operates over tracks at least partially owned by freight rail companies; the same is true for most commuter lines. Those tracks would be taken out of service in the event of a freight rail strike. Amtrak trains that operate between Washington, D.C. and Boston would not be affected because Amtrak owns most of those tracks.

Metra, Chicago’s commuter rail network which operates on tracks owned by BNSF and Union Pacific, said Wednesday it will shut down trains after Thursday’s rush hour in preparation for a work stoppage. Trains will operate on Friday if a work stoppage does not occur.

MARC and VRE, which serve the Washington area, both said that trains which run on lines owned by CSX and Norfolk Southern will not run in the event of a work stoppage. Both of VRE’s rail lines into Virginia are operated by freight rail companies, while two of MARC’s three rail lines into Maryland would shut down.

“MDOT MTA recommends MARC Camden and Brunswick Line passengers plan for alternate travel options in the event of a strike,” MARC said in a statement. “Penn Line service will not be impacted on Friday, September 16, and will operate full service as scheduled.”

VRE, which is currently free during the month of September due to ongoing Metro Rail Blue and Yellow station closures in Virginia, encouraged customers to seek alternative commute options.

Philadelphia’s SEPTA network and New Jersey Transit confirmed that their commuter rail services will not be affected by a potential strike.

“We don’t run Regional Rail on any freight tracks,” SEPTA spokesperson Andrew Busch said. “Amtrak has told us that the Amtrak rail we use on the Trenton, Wilmington and Paoli lines will not be impacted.”

“We have been working closely with Conrail and have assurances that they will have mitigation measures in place at the appropriate areas on the Raritan Valley Line and the Atlantic City Rail Line to ensure there are no impacts,” NJ Transit said in a statement.

Amtrak began canceling some long distance trains on Monday due to a potential work stoppage, and trains that operate outside of the Northeast Corridor will mostly stop operating if freight rail tracks are unusable.