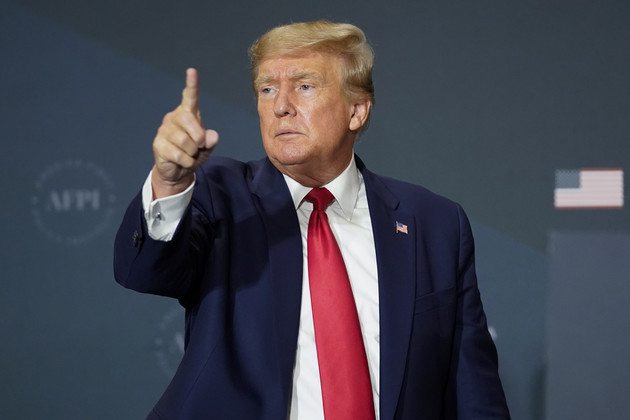 An anti-Trump Republican group already spending millions of dollars this fall to oppose election-conspiracy candidates is now upping its investment.

In a $3 million ad buy launching Monday, the Republican Accountability Project’s nonprofit arm is setting out to remind voters in seven critical swing states of what happened Jan. 6, 2021 — a message they believe will resonate with some traditional Republican voters they hope to peel off from the Trump base in the party.

The organization’s television and digital ad campaign, shared exclusively with POLITICO, includes footage of Donald Trump supporters beating police officers at the Capitol, messages from self-identified Republicans opposing Trump and commentary from Rep. Liz Cheney (R-Wyo.), the ranking member of the House Jan. 6 committee, who has defied her party to spotlight Trump’s role in the Capitol attack.

“As Americans, we all have a duty to ensure that what happened on Jan. 6 never happens again,” Cheney says in one of the ads.

For the next three weeks, the ads will appear during local broadcast news in major markets in Arizona, Georgia, Michigan, Nevada, North Carolina, Pennsylvania and Wisconsin — states that were decided by a handful of percentage points in the 2020 presidential race (and where 2022 midterm races feature some of the most prominent election deniers in the country, like GOP gubernatorial nominees Doug Mastriano of Pennsylvania and Kari Lake of Arizona). RAP will also promote its ads on digital platforms across those states, and a spokesperson for the group said it may extend the ad buy.

The group’s goal is also to seize on a potential opening in the Republican Party ahead of 2024 — namely, to help influence Republican voters to support someone other than Trump in the next presidential election.

Though Trump remains the overwhelming favorite among right-wing activists, as evidenced in recent straw polls conducted at major conservative gatherings, rank-and-file GOP voters are less convinced. A Siena College/New York Times poll conducted last month showed the former president with support from just under half of Republican primary voters in a matchup with several other candidates.

Longwell’s organization is chasing after voters whose minds can be changed on Trump and the seriousness of the Jan. 6 attack, she said. Through a combination of focus groups and platform testing, RAP determined that testimonials from GOP voters and clips of Cheney presiding over the select committee are highly persuasive with other Republicans, she said.

“We’ve really seen movement among these center-right voters — less breaking through than seeping in,” Longwell said of the group’s findings after showing voters the clips in question.

Since the Jan. 6 select committee began holding public hearings, Longwell said her organization has “seen a real drop off, in focus groups, of people who want to see Trump run again in 2024.”

The group wants to fill the August void — while the Jan. 6 committee is on a break until September — and keep the select committee’s finding front of mind for average voters during that time.

Separately, Republican Accountability PAC intends to buy $10-million worth of political ads this year to oppose candidates in 14 states who have supported Trump’s election fraud conspiracy theories. So far, the group has raised $7.5 million toward that goal. In contrast, the nonprofit ad campaign does not mention particular candidates by name, but instead focuses on Jan. 6 and Trump.

The testimonials — from self-identified “conservative” voters and “lifelong” and “former” Republicans — were recorded on web cameras, in a style the organization employed during the 2020 election, when it launched as Republican Voters Against Trump. Longwell said research determined that using testimony from the type of people in their target audience (which RAP refers to internally as “trusted messengers”) was the most effective way to get through to GOP voters.

“The assault on police officers, the destruction of property, the reason for being there — to stop certification of the election,” a voter named Tom says in one of the 30-second spots, listing what turned him off from the party Jan. 6. “If they had found Mike Pence, do you have any doubt that he would have been hung? Somehow there needs to be accountability for the people who masterminded that horrible event.”