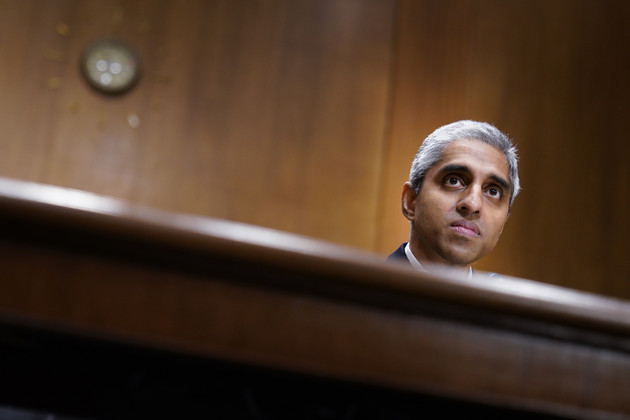 The 5th Circuit Court of Appeals ruled that a district court judge in Louisiana erred by approving the depositions for Surgeon General Vivek Murthy and two other White House officials without examining whether there were other means of getting the information plaintiffs are seeking. | Susan Walsh/AP Photo

A federal appeals court has halted planned court-ordered depositions of three top Biden administration officials in a lawsuit the states of Missouri and Louisiana brought over alleged pressure on social-media companies to remove posts containing purported misinformation about the coronavirus, election security and other issues.

A panel of the New Orleans-based 5th Circuit Court of Appeals ruled Monday that a district court judge in Louisiana erred by approving the depositions for Surgeon General Vivek Murthy, Cybersecurity and Infrastructure Security Agency Director Jen Easterly and White House Director of Digital Strategy Rob Flaherty, without examining in detail whether there were other means of getting the information plaintiffs are seeking to prove their claims.

The suit filed in May by the Republican attorneys general of Missouri and Louisiana claims President Joe Biden and various officials used pressure on social-media firms to deprive Americans of their First Amendment rights.

“Before any of the depositions may go forward, the district court must analyze whether the information sought can be obtained through less intrusive, alternative means, such as further written discovery or depositions of lower-ranking officials,” the appeals court declared in a five-page, unanimous order issued by Judges Edith Clement, Leslie Southwick and Stephen Higginson. “It is not enough, as the district court found, that these officials may have ‘personal knowledge’ about certain communications. That knowledge may be shared widely or have only marginal importance in comparison to the ‘potential burden’ imposed on the deponent.”

The appeals court also said U.S. District Court Judge Terry Doughty, who sits in Monroe, La., should consider ruling on the overall viability of the lawsuit before allowing the disputed depositions. The tone of the 5th Circuit decision exhibited some skepticism about the legal theory behind the case.

Actions by private companies, such as the social-media giants, don’t typically give rise to First Amendment claims because only government officials and agencies are obliged to respect free speech rights guaranteed in the Constitution. However, courts have sometimes found First Amendment violations where government officials induce or threaten contractors or other businesses to take steps the government could not. It’s unclear whether there was any express coercion of the firms, although Biden leveled blunt criticism at Facebook last year, saying: “They’re killing people.” He later walked back his comments, which were focused on vaccine misinformation.

While the appeals court’s ruling Monday put the the depositions for Murthy, Easterly and Flaherty on hold, it was not a final decision on whether they will ultimately have to testify in the case. Doughty must clarify his analysis if he still thinks the depositions are needed.

The 5th Circuit decision could also bolster an effort by the Justice Department and lawyers for former White House press secretary Jen Psaki to overturn an order requiring her to be deposed in the case. At a hearing last week, an attorney for Psaki said there’s no evidence she met or had contact with any social media executives about alleged misinformation, although she did make comments critical of the firms from the White House podium.

Doughty issued an order Monday morning rejecting the motions by Psaki and DOJ to scuttle her deposition. “Despite the fact that Psaki is a former high-ranking official, the potential burden upon Psaki was outweighed by the need to determine whether free speech had been suppressed,” the judge wrote.

It’s unclear what steps Psaki, who left the White House in May, or the Justice Department plan to take to try to block her deposition, now scheduled for Dec. 8. A lawyer for Psaki and a spokesperson for Missouri Attorney General Eric Schmitt, who was elected to the U.S. Senate earlier this month, did not respond to requests for comment. A DOJ spokesperson had no immediate comment on the 5th Circuit ruling.