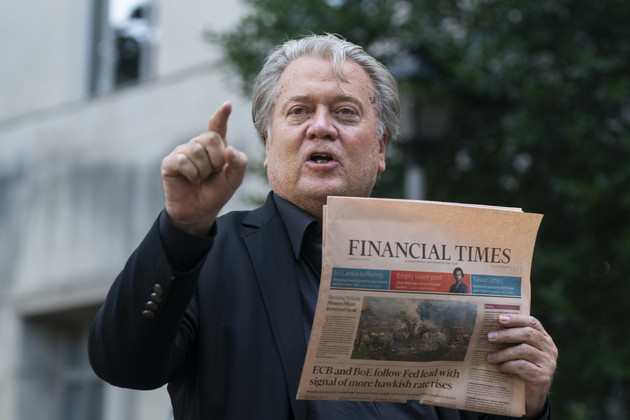 The Jan. 6 select committee told Steve Bannon last week that his abrupt offer to testify did not absolve him from previous efforts to defy a subpoena from the panel seeking his documents and testimony.

In a July 14 letter — revealed by Bannon’s attorneys during his trial on charges of criminal contempt of Congress — Chair Bennie Thompson (D-Miss.) said he would consider Bannon’s offer to testify to the Jan. 6 select committee only if he first provided documents that the committee had been seeking for nearly a year. But such belated cooperation, Thompson said, would not erase what had already occurred.

“The July 9, 2022, outreach to the Select Committee by you on Mr. Bannon’s behalf does not change the fact that Mr. Bannon failed to follow that process and failed to comply with the select committee’s subpoena prior to the House referral of the contempt resolution concerning Mr Bannon’s defiance of the subpoena,” Thompson wrote.

The letter underscores the ongoing dialogue between the select committee and Bannon as the panel tries to obtain new information from a high-profile witness known to be in contact with then-President Donald Trump in the days and weeks preceding the Jan. 6, 2021, insurrection. During testimony in Bannon’s trial Wednesday, Kristin Amerling, the chief counsel of the Jan. 6 select committee, said that despite Bannon’s abrupt offer to cooperate, he still had not turned over any documents.

Prosecutors rested their case on Wednesday afternoon, after calling just two witnesses. Most of the day centered on Amerling’s testimony and vacillated between a dry recitation of the inner workings of the select committee and the process by which it issued a subpoena to Bannon in September 2021. It also included some obscure questioning by Bannon’s attorneys about Amerling’s prior involvement in a book club that one of the prosecutors in the case also belongs to.

Earlier in the day, the federal judge presiding over Bannon’s trial said he would refuse to allow the case to become a “political circus.” U.S. District Court Judge Carl Nichols issued that promise as he ruled to bar Bannon’s defense team from asking questions about the motives of individual members of Congress who supported subpoenaing Bannon to testify about matters related to the Jan. 6 attack on the Capitol.

“I do not intend for this to become a political case, a political circus, a forum for partisan politics,” Nichols said.

His comments came after Justice Department prosecutors warned that they viewed Bannon’s initial defense in the case to be an attempt to inject politics into the minds of the 14 jurors observing the case. Bannon’s defense attorney Evan Corcoran spent his opening argument describing the House as an inherently political body whose members are consumed — first and foremost — with the impact of politics on their actions.

The debate underscores concerns within the Justice Department about the potential for Bannon to use his trial — for defying a subpoena from the Jan. 6 House select committee — to advance his own political brawl with congressional Democrats.

On Tuesday, Bannon emerged from the courthouse at the end of the trial’s first substantive day and disparaged the select committee, describing Thompson as a “disgrace” and accusing its members of lacking the “guts” to testify against him.

Speaking to a phalanx of video cameras and journalists covering the high-profile trial, Bannon also complained that the proceedings were unfair because his effort to subpoena Thompson and others had, so far, been rebuffed by the judge.

Bannon made similar comments outside the court on Wednesday.

“Why is Bennie Thompson not here defending his committee, the show trial, the Moscow show trial of the 1930s? Why is he not here in person?” the former Trump adviser said, before suggesting without any evidence that Thompson was lying about a recent Covid diagnosis.

Despite the antics outside, there was no mention in court on Wednesday of Bannon’s fusillade of verbal attacks.

While prosecutors complained last year about inflammatory comments by Bannon soon after the misdemeanor contempt charges were filed, prosecutors did not raise Bannon’s latest salvos during their presentation to the judge Wednesday morning. It’s unclear whether any jurors in the case may have overheard or passed by while Bannon was speaking.

Bannon’s defense contended that its opening arguments were within bounds that the court had laid out and that it is reasonable for them to ask questions about the biases of witnesses in the case.

“[Government] counsel seems to be worried about us turning this into a political circus,” Corcoran said. “That’s not our intention and that’s not what we did in the opening.”

Much of the defense’s cross-examination on Wednesday of Amerling was tedious and technical. Corcoran pressed her on who dated the subpoena to Bannon, whether he received a copy of related House rules and even whether the panel uses typewriters in its Longworth Building offices.

However, the defense scored a potentially significant victory on Wednesday afternoon when Nichols permitted jurors to see an exchange of letters from earlier this month in which Bannon notified the committee he was now willing to testify because Trump had dropped his executive privilege claims.

Nichols said the letters could bear on whether Bannon thought the committee had effectively extended the deadlines related to the subpoena by engaging in a dialogue with his attorney about receiving testimony.

While the judge let the recent letters into evidence for that purpose, he told jurors they were not to consider the substance of the arguments in them, including Trump’s privilege claims.

“Mr. Bannon’s belief that questions around executive privilege excused him from complying with the subpoena are irrelevant in this case,” Nichols told the jury.

The prosecution sought to counter that correspondence by noting that Bannon’s offer this month came about nine months after the original deadline last year and included demands that Bannon testify at a public hearing rather than the deposition the committee requested.

Prosecutor Amanda Vaughn repeatedly called Bannon’s offer “sudden” and noted that it came shortly before the scheduled trial in the case. She also noted that Bannon’s lawyer’s letter did not offer any of the documents the committee subpoenaed. Defense lawyer Robert Costello told POLITICO earlier this month that Bannon did intend to provide documents as part of his newfound willingness to cooperate, but Amerling said nothing had come in from him as of Wednesday morning.

“Not unless he’s provided some since I’ve been sitting here today,” Amerling replied.

After some back-and-forth, Nichols ruled on Wednesday morning that some questions about the purported biases of individual witnesses would be permitted, but that Bannon’s attorneys could not ask committee staffers about the alleged biases of Thompson or other committee members.

The panel’s members, House Speaker Nancy Pelosi and House General Counsel Douglas Letter have formally objected to being subpoenaed in the case, arguing that the Constitution’s speech-or-debate clause precludes them from being forced to take the witness stand in the case.

Nichols hasn’t issued a final ruling on that legal issue, but said he could revisit it after the committee staff witnesses testify for the prosecution and face cross-examination by the defense.

Despite the judge’s warning about avoiding a “political circus,” part of Corcoran’s cross-examination of Amerling zeroed in on political affiliation by suggesting she’s a partisan Democrat.

“You’ve always worked for the Democrats, is that accurate?” Corcoran asked.

“I have reported directly throughout my career to the leading Democrat on the body I worked for,” the panel lawyer said.

“You’ve also made personal donations to Democratic candidates, is that correct?” Corcoran continued.

Corcoran also pressed Amerling about her participation in a book group that one of the prosecutors in Bannon’s case, Molly Gaston, is also part of. Amerling said she hadn’t attended in about a year or more.

At times, the questions seemed to verge on the absurd.

“Do you read nonfiction?” Corcoran asked.

“Do you mean in my book group or are you asking me personally?” Amerling asked.

“Is it accurate to say that most of the members of your book club worked together as Democratic staff for one of the committees?” the defense attorney asked.

“Given the careers of the folks who were involved in the book group, it’s not unusual that you would talk about politics in some way or another,” Amerling said.

The prosecution’s second and final witness on Wednesday was FBI Agent Stephen Hart, who testified about subpoena-related posts on the social media site GETTR in which Bannon seemed to be proudly touting his defiance of the subpoena.

Hart said that during a meeting trying to persuade prosecutors not to file charges, Costello never indicated that Bannon thought the dates on the subpoena were flexible.

Corcoran suggested that having an FBI agent testify in court about an attorney’s so-called proffer session was a dirty tactic. The move also seemed to irritate Bannon, who grew red and shook his head when the subject of the meeting with prosecutors was raised.