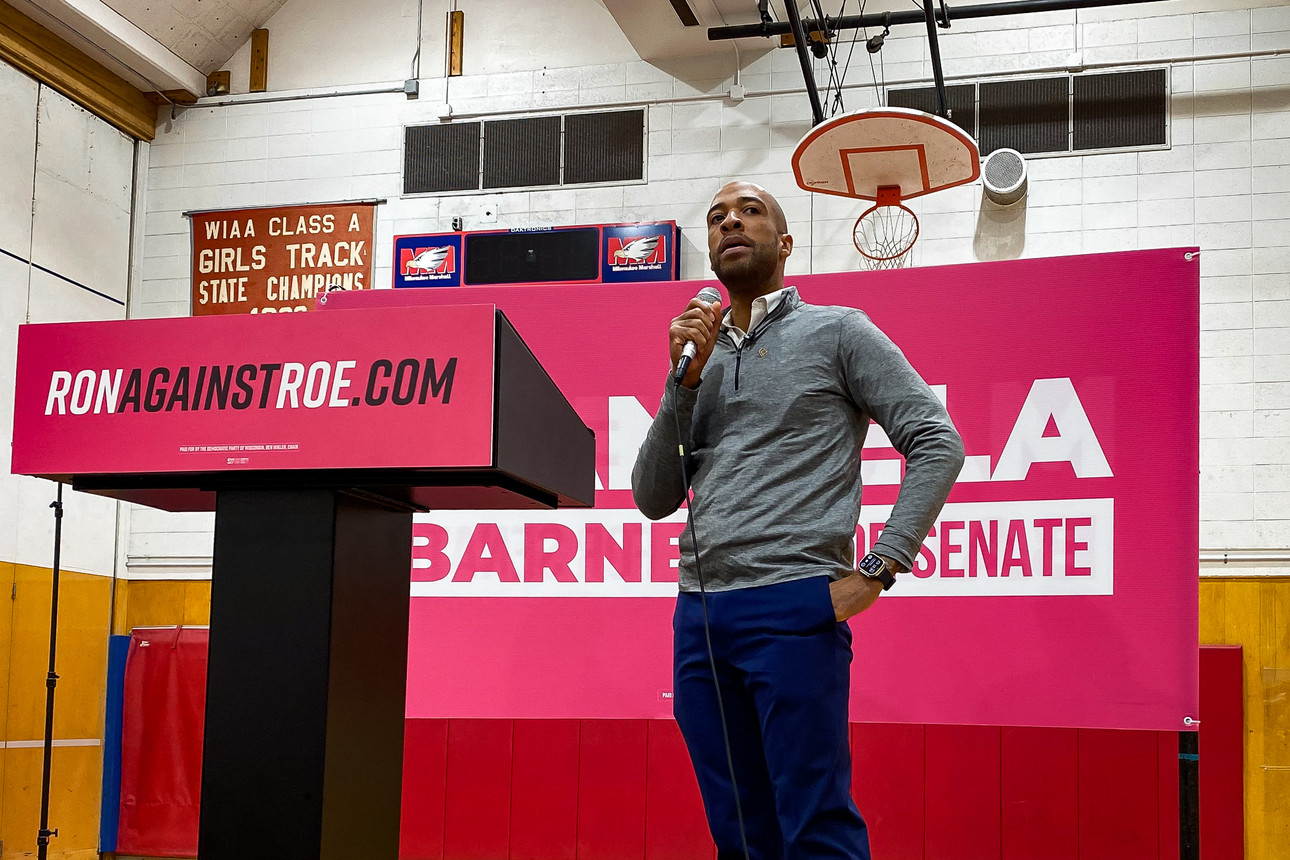 MILWAUKEE — Wisconsin Democrat Mandela Barnes is looking to turn around his struggling Senate campaign after being battered by two months’ worth of attack ads labeling him soft on crime. His play: make the race a referendum on Republican Sen. Ron Johnson’s record on abortion policy.

To reverse a slide in the polls, the Democratic lieutenant governor has debuted a “Ron Against Roe” tour of rallies, roundtables and canvassing. He’s launched a negative ad calling Johnson’s view on abortion “alarming.” And he’s gotten a boost from the top Senate Democratic super PAC, which has put up similar anti-Johnson spots.

“A woman’s freedom to choose is absolutely on the ballot this year and this goes beyond party lines,” Barnes told POLITICO in a statement. “Everywhere we go, I hear from Republicans and independents who are horrified by Johnson’s dangerous anti-choice record and motivated to get out and vote this year to protect women’s rights.”

The Wisconsin Senate race is shaping up to be one of the most high-profile tests of whether voter anger over the end of abortion rights can propel a Democrat to victory in a major battleground state where the procedure is now restricted — or if the summertime boost to Democrats following Dobbs v. Jackson Women’s Health Organization was merely a sugar high.

The loss of abortion rights is not a theoretical possibility here: After the Supreme Court overturned Roe v. Wade, an 1849 Wisconsin law went back into effect banning the procedure with no exceptions for rape or incest. Doctors immediately stopped providing abortions and clinics around the state shut down.

According to a recent poll by Marquette University Law School, Wisconsin voters opposed the recent Supreme Court decision by a whopping 63 percent to 30 percent. But abortion was only rated as the sixth-most concerning issue by registered voters.

Republicans are brushing off Barnes’ attacks, arguing that inflation and crime matter more to voters this year than abortion rights.

“The trouble for Barnes is abortion is not a top-three issue for all voters or, more specifically, for independent voters,” said Bill McCoshen, a Wisconsin-based Republican strategist. “It appears to only motivate the Democratic base. Two weeks from now, the national Democrats could be pulling out of here because Johnson is starting to gain separation.”

Though Barnes hasn’t focused exclusively on the issue, some Democrats are questioning whether abortion will be a cure-all for the party’s ills this November.

“Polls show inflation is a top concern among voters, especially for blue-collar voters of all races, which Wisconsin has a lot of,” said Irene Lin, a Democratic operative who worked as Tom Nelson’s Senate campaign manager during the state’s 2022 primary. “We can’t just rely on abortion as a message while so many are struggling to pay their bills.”

At a rally in Milwaukee on Saturday at John Marshall High School, where Barnes was once a football team captain, the Democrat stood at a podium with a bright pink sign that read “RonAgainstRoe.Com.” People in the crowd of a couple hundred held homemade posters that read, “My Body My Choice” and “I Will Not Go Quietly Back to 1846.”

“He called it a victory,” Barnes told the audience, referring to Johnson’s response in June to Roe v. Wade being reversed. “It speaks to a bigger problem in Washington. The voices of the most impacted are rarely ever at the table.”

In a signal that national liberal groups are prioritizing the Wisconsin Senate race — and hoping to shore up Barnes’ standing — Planned Parenthood Federation of America president Alexis McGill Johnson also spoke at Saturday’s event. Talking to the news media afterward, she disagreed with the premise of a question about abortion no longer being top of mind among voters, saying, “The energy is incredibly strong. Abortion is still very much an issue that people really voted for.”

Though Johnson has retaken the lead after Barnes was in first place over the summer, the Senate contest is still close in public polling, with the Republican ahead by 2 to 3 percentage points. However, Barnes has not led an election survey since mid-September.

Barnes’ campaign and his allies believe Johnson’s record on abortion gives them plenty to work with to pull voters back into his camp. Though Johnson has suggested that he does not back the 15-week national abortion ban recently proposed by Sen. Lindsey Graham (R-S.C.), he previously sponsored similar bills and signed an amicus brief to the Supreme Court in Dobbs expressing support for the Mississippi law outlawing most abortions after 15 weeks.

Democratic consultants think Johnson handed them an opening a few years ago, when he said in reference to abortion laws that “if you don’t like the result in your state that you currently reside in, you can move.” In Barnes’ recent attack ad, a narrator says, “Johnson said if women don’t like it, they can ‘move’ — the truth is, it’s Ron Johnson who doesn’t belong in Wisconsin.”

A Democratic internal poll found that Johnson’s 2019 remarks raised very serious concerns for 49 percent of Wisconsin voters. The same survey also showed that, 51 percent to 46 percent, voters are more worried that Johnson “will try to ban abortion even in cases of rape and incest” than they are that Barnes “will support an agenda that defunds the police.” For undecided voters, the figures were 53 percent to 42 percent.

Ben Wikler, chair of the Wisconsin Democratic Party, said there has been a “vibe shift” in the Senate race after Barnes’ attacks on Johnson over abortion, as well as a “great” debate performance last week and an increase in Democratic spending on television commercials.

“Two weeks ago, I couldn’t get off the phone fast enough to pick up the next call from someone who was panicking,” he said. “Now there’s a sense that it’s more all hands on deck.”

Johnson’s campaign has sought to turn the tables on Barnes, arguing that the Democrat is too far left on abortion. Johnson spokesman Ben Voelkel said he “has the most extreme position on abortion possible,” pointing to Barnes recently declining to state support for any legal restrictions on abortion based on timing.

Barnes said his position on abortion is that he wants to codify Roe v. Wade, which “ensured strong protections for the health and life of the woman.”

As for Johnson’s stance, Voelkel said he “wants citizens of each state to decide this profoundly moral issue for themselves and personally supports legal exceptions for instances of rape, incest, and to save the life of a mother.”

Abortion rights advocates, however, have noted that Johnson sponsored a “Life at Conception Act” in 2011 that they argued would likely ban the procedure without any exceptions.

Unlike Democrats, Republicans haven’t made the issue of abortion part of their TV advertising strategy. Instead, the GOP’s negative ads have highlighted Barnes’ support for ending cash bail and accused him of wanting to “defund the police.”

Barnes signaled that he backed abolishing Immigration and Customs Enforcement and reducing police spending in the past, but has said during his Senate bid that he does not want to eliminate ICE or defund law enforcement.

In Kenosha County, a swing area about 30 miles from Milwaukee that supported both former President Donald Trump and Democratic Gov. Tony Evers, a handful of voters were unsure whether to back Johnson or Barnes — and were being pulled in different directions because of their concerns over both abortion rights and crime.

“I don’t like Ron Johnson’s views on abortion. I don’t personally believe in abortion, but I think it’s every woman’s choice to do what they want,” said Emily Zielsdorf, a retail clerk in Kenosha County. She said she’s leaning toward Barnes, though she also expressed unease about his views on public safety: “Defunding the police and letting people out on no-cash bail, that’s a concern.”

Most voters in Kenosha County appeared to have made up their minds, though.

Mike Stubbs, a part-time driver for a medical transportation company in Kenosha County, acknowledged that “Johnson says some things I don’t like,” but ultimately, he said, “I couldn’t in my right mind vote for Mandela Barnes” because of his position on crime.

“The fact that he’s in favor of no-cash bail, that’s a biggie with me. I think abortion is a big issue, too, but I fall on the ‘it’s up to the woman to decide,’” said Stubbs.

Troy Dillard, a photographer who works in Kenosha, said he is planning to vote for Barnes because “Ron Johnson is crazy,” citing conspiracy theories he embraced about fraud in the 2020 election.

“The way he went about the last election is unacceptable behavior by any person in power and to reward that kind of behavior only encourages it to continue by other people,” he said. “We can’t have that.”

Two hits to the mitochondria can cause severe anemia