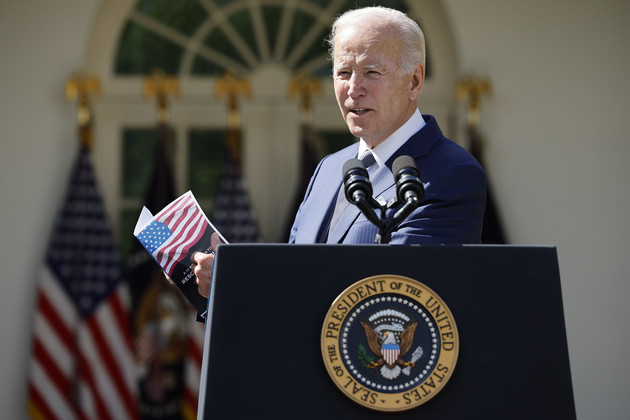 The president declined to draw a "red line" for actions against Ukraine that would elicit a direct military response to Russia. | Chip Somodevilla/Getty Images

President Joe Biden continued to explain and modify his warning about nuclear “Armageddon” from Russia, a stark suggestion about the potential for escalation in Russia’s war against Ukraine he made last week.

The most recent remarks came in a wide-ranging interview with CNN host Jake Tapper, which aired Tuesday and covered both domestic and international issues.

Asked by Tapper whether he thought Putin would actually use nuclear weapons, Biden said, “I don’t think he will. But I think that it’s irresponsible for him to talk about it.”

The threat of a nuclear weapon could lead, Biden said, “to just a horrible outcome. And not because anybody intends to turn it into a world war or anything, but … the mistakes that can be made, the miscalculations, who knows what would happen?”

In recent weeks, Putin has hinted at the use of nuclear weapons against Ukraine as the military situation has deteriorated for Russian forces. “We have not faced the prospect of Armageddon since Kennedy and the Cuban Missile Crisis,” Biden said Thursday during a fundraiser.

The president also said “there will be consequences” for Saudi Arabia following their alignment with Russia in slashing global oil production.

Biden declined to say exactly what those consequences might be — including whether they would include suspending all arms sales to the kingdom. Biden did say it was time for the United States to rethink its relationship with the oil-rich country.

With gas prices rising, Biden said a recession is “possible,” but he doesn’t anticipate it.

“I don’t think there will be a recession. If it is, it’ll be a very slight recession. That is, we’ll move down slightly,” Biden said.

The U.S. has not seen any imminent indication Russia plans to use nuclear weapons, the Pentagon said Friday, though some nuclear experts and former officials told POLITICO that Biden’s comment was not an exaggeration of the situation.

In the pre-taped interview with Tapper at the White House, the president declined to draw a “red line” for actions against Ukraine that would elicit a direct military response to Russia.

“It would be irresponsible of me to talk about what we would or wouldn’t do,” Biden said.

In a clip of the interview released earlier Tuesday, Biden described Putin as “a rational actor who’s miscalculated significantly” in invading Ukraine.

Biden joined Tapper on Tapper’s first night of a temporary run anchoring the 9 p.m. hour. The slot has been without a regular host since former CNN anchor Chris Cuomo was ousted by the network last year, and the interview was the network’s first with Biden since he became president.