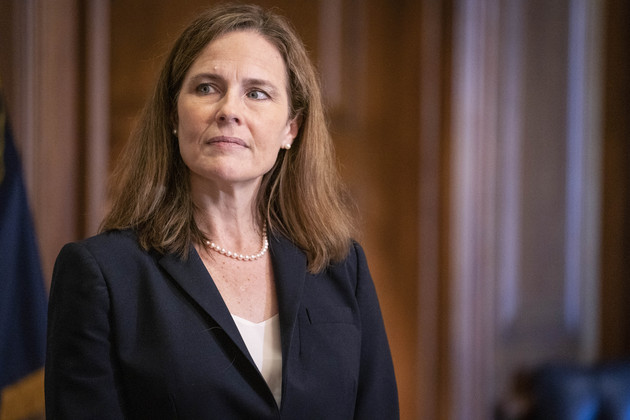 Barrett denied the request by a Wisconsin taxpayer advocacy group without comment or any indication she referred the matter to the full court. | Sarah Silbiger/Getty Images

The legal battles over the sweeping debt relief program, which offers up to $20,000 of loan forgiveness to tens of millions of Americans, are far from over — and the issue could potentially end back at the Supreme Court in a matter of days or weeks.

But, so far, several Republican-appointed judges have been cool to efforts by GOP state officials and conservative groups to put an immediate halt to Biden’s plan.

Barrett on Thursday swiftly rejected a Wisconsin conservative group’s emergency request to stop the policy without comment or any indication she referred the matter to the full court.

Barrett, a Donald Trump appointee, had received the request a day earlier because she oversees emergency matters from the 7th Circuit Court of Appeals. It was the first time a legal challenge to Biden’s relief plan had reached the high court.

The Brown County Taxpayers Association had argued that it should be able to challenge the Biden administration’s debt relief program on behalf of the taxpayers who it says will be dealt a “staggering” blow by the policy. The lawsuit was brought by the conservative Wisconsin Institute for Law & Liberty.

Also on Thursday, a federal judge in Missouri dismissed a lawsuit by six Republican-led states challenging the debt relief plan.

U.S. District Judge Henry Edward Autrey, a George W. Bush appointee, ruled that the states did not articulate the type of harm that’s needed to have their legal challenge heard in federal court.

The legal challenge brought by the six Republican officials — in Nebraska, Missouri, Arkansas, Iowa, Kansas and South Carolina — is likely to be appealed. It is widely seen by proponents and critics of the debt relief plan as among the most serious and credible challenges.

The GOP state attorneys general had argued that Biden’s student loan policy was illegal, unconstitutional, and should be stopped.

They argued that the Biden administration’s actions would cause them economic injury because of lost tax revenue as well as other losses stemming from federal student loans that state-related entities manage, own, or invest in. But Judge Autrey ruled on Thursday that many of those harms were “merely speculative” or at least not imminent.

In addition, he ruled that Missouri’s argument that it could claim any losses suffered by a quasi-state entity — the Missouri Higher Education Loan Authority, known as MOHELA — as its own.

MOHELA, which owns and services federal student loans, was not a named plaintiff in the lawsuit. And Autrey wrote that the organization’s finances were too removed from the state of Missouri for officials to be able to pursue the lawsuit on behalf of MOHELA.

The decision was, in part, a vindication of the Biden administration’s legal strategy to suddenly curtail its debt relief program without warning in September, which drew the ire of many borrowers and some progressives.

In a reversal, the Education Department announced Sept. 29 that it would no longer allow borrowers with federal loans held by private entities to convert their loans in a way that qualifies them for the relief program.

Several of the GOP-led states had argued that forgiving those privately-held federal student loans would harm state-related organizations that own or invest in them.

But Autrey ruled on Thursday that the policy change had eliminated an “ongoing injury” to two of the states, Arkansas and Nebraska, meaning they no longer have standing to challenge the entire policy.

More than 12 million Americans have applied for student loan forgiveness since the Biden administration opened the website for borrowers to request up to $20,000 of debt relief late last week.

The Biden administration has said in court filings that it would not begin discharging any debt before this Sunday as various lawsuits play out across the country.

The administration argues that it has the power to grant debt relief to large swaths of Americans under a 2003 law that gives the Education Department special powers over federal student loans in times of war or national emergencies, such as the Covid-19 pandemic.

Biden is slated to travel to Delaware State University to promote his student debt relief plan on Friday.

White House Press Secretary Karine Jean-Pierre earlier on Thursday declined to discuss any contingency plans the administration has if a court blocks the program, instead criticizing GOP officials for seeking to end it.

“There are opponents out there who are trying to take away what we’re trying to do, what the President is trying to do for the middle class,” she told reporters.