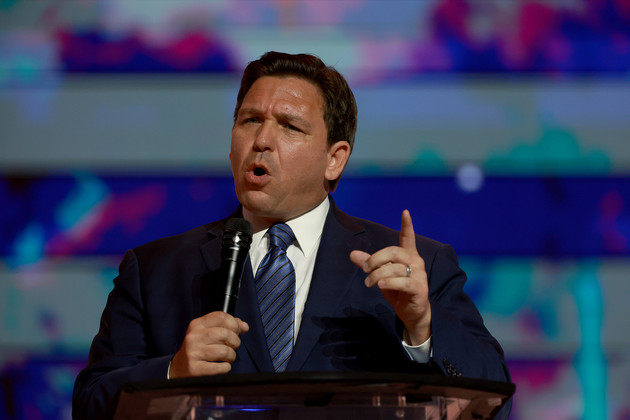 The lawsuit alleges Gov. Ron DeSantis overstepped his authority to suspend elected officials from office because he did so with Warren only for signing pledges, rather than in response to an official action. | Joe Raedle/Getty Images

DeSantis detractors immediately condemned Warren’s Aug. 4 suspension as political overreach and targeting a political foe. The governor framed the move as maintaining his “law and order” philosophy and characterized Warren’s suspension as removing a progressive prosecutor who refused to enforce laws. Warren has twice been elected to serve as State Attorney for the 13th Judicial Circuit.

“This morning I filed a suit in federal court to challenge that blatant abuse of power by Governor DeSantis in suspending me as state attorney,” Warren said during a Wednesday morning press conference in Tallahassee. “There is so much more at stake here than my job.”

Warren’s lawsuit, filed in the U.S. District Court Northern District of Florida, alleges that DeSantis violated his First Amendment rights by suspending him for signing a pledge to not prosecute women for seeking abortions and his public statements opposing the criminalization of transgender people. He is asking the court to throw out DeSantis’ executive order used to suspended him and to rule governors are not allowed to take similar actions moving forward.

It also alleges DeSantis overstepped his authority to suspend elected officials from office because he did so with Warren only for signing pledges, rather than in response to an official action. The issue is likely now headed to the Republican-led Florida Senate, which would have to take action before Warren is formally removed from office.

“No decision on any case ever considered by Warren while in office was impacted by these statements,” wrote David B. Singer, an attorney representing Warren, in the lawsuit. “Statements of opinion on matters of public debate do not relate to incompetence within the meaning of the Florida Constitution.”

Warren’s profile has grown in the wake of his suspension, as Democrats and others have rallied around him and accused DeSantis of deploying bullying tactics and constitutional overreach.

Warren, in his lawsuit, claims his suspension amounts to political payback over policy disagreements.

“It’s not surprising Warren, who was suspended for refusing to follow the law, would file a legally baseless lawsuit challenging his suspension,” said Taryn Fenske, DeSantis’ communications director. “We look forward to responding in court.”

Warren’s lawsuit also notes that he has “never been referred a case involving a request to prosecute abortion-related crimes,” so he has never refused to prosecute under any state law, despite signing the abortion pledge.

DeSantis’ press conference announcing Warren’s suspension was a political-tinged spectacle featuring a rally-style event with local law enforcement officers, each taking their turn at the mic to blast Warren’s performance as state attorney. DeSantis’s former press secretary Christina Pushaw tweeted the night before teasing that there was a “MAJOR announcement” coming the next day. That tweet from Pushaw was included as part of the lawsuit as Warren tried to paint his suspension as more political than driven by adherence to state law.

Republicans have previously targeted Warren in 2016 over election-related financial support he received from Democratic donor George Soros. They have also criticized him for his progressive stance on criminal justice reform.

“DeSantis has spoken out frequently opposing Warren and Warren’s views, including specifically on the subjects of criminal justice administration, abortion, and the rights of transgender people,” read the lawsuit.

Wells Fargo slammed with $3.7B penalty, in record CFPB settlement