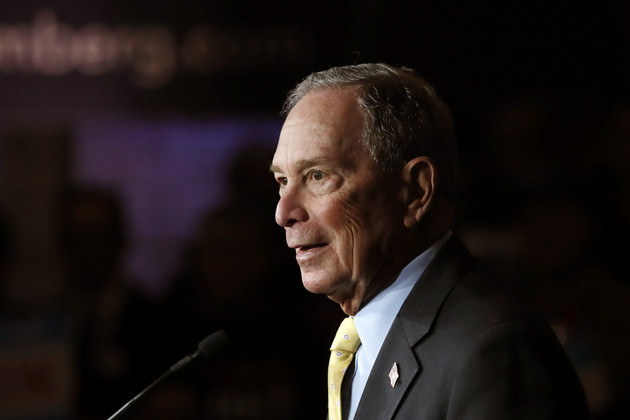 The $10 million donation to the House Majority PAC brings to more than $70 million Mike Bloomberg's contributions to party candidates and causes for the cycle. | Carlos Osorio/AP Photo

House Democrats scrambling to keep pace with the onslaught of late-arriving Republican super PAC dollars are again turning to billionaire Mike Bloomberg for help in the closing days of the midterms.

Bloomberg, the former New York City mayor, is sending another $10 million to the House Majority PAC, an adviser told POLITICO. The donation comes as Democratic leadership labors for more dollars to protect seats and avert a massive red wave.

“He has a long-standing relationship with Speaker Pelosi, was aware of the party’s current needs, and wanted to step up again,” Marc La Vorgna, a Bloomberg spokesperson, told POLITICO.

Bloomberg has had a less visible role on the national political scene this cycle after unsuccessfully running for president in 2020. But La Vorgna said he is heavily invested in maintaining Democratic control of Congress, after helping to flip the House in 2018.

Democrats are facing a far more toxic climate now, with the party’s main committees and campaign arms triaging their resources to protect vulnerable incumbents. The latest cash influx, which brings to $21 million Bloomberg’s contribution to House Democrats, is not earmarked and can be spent in districts where party leaders are desperately trying to hang on.

It’s part of a new, broader strategy by one of the world’s wealthiest men to spread around his dollars to battleground races further down the midterm ballot to avert threats from Republicans. So far, he’s directed between $500,000 and $2 million apiece to gubernatorial campaigns in Michigan, Pennsylvania, Colorado, New Mexico and Wisconsin, as well as another $2 million to Democratic secretaries of state.

The $10 million donation to the House Majority PAC brings to more than $70 million his contributions to party candidates and causes for the cycle.

While little of Bloomberg’s House spending so far is publicly accounted for, two people familiar with the expenditures said he is steering money toward Reps. Josh Gottheimer and Mikie Sherrill of New Jersey. Both are Democrats he’s backed in prior contests and both battleground seats have been competitive in the past, though they lean bluer thanks to redistricting. House Majority PAC this week made a $2.3 million buy for Gottheimer and VoteVets, a Democratic group that works in tandem with House Majority PAC, made a $2 million buy for Sherrill, according to AdImpact, a media tracking firm.

But neither incumbent is locked in a particularly competitive race — President Joe Biden carried both districts by double-digit margins — and both are flush with cash of their own. Sherrill had $3.4 million to her opponent’s $279,000 in the most recent campaign finance reports. Gottheimer ended September with $14 million in the bank; his opponent had less than $172,000. Gottheimer, a prolific fundraiser, ended the third quarter with more cash on hand than nearly any other member of the House, except Reps. Katie Porter (D-Calif.) and Adam Schiff (D-Calif.).

The vast majority of Bloomberg’s dollars, though, are likely to be distributed to House Democrats’ more urgent needs, as determined by party leaders. And they come on the heels of Biden this week directing another $10 million from his political apparatus to the House and Senate Democratic campaign arms.

Pelosi — who’s raised hundreds of millions on her own this cycle — expressed her gratitude to Bloomberg in a statement, saying he’s been “a key resource as Democrats are working to advance job creation, ensure public safety, protect a woman’s right to choose, defend Medicare and Social Security, and lower the costs of prescription drugs.” And Rep. Hakeem Jeffries of New York, chair of the House Democratic Caucus, said Bloomberg’s contributions would allow Democrats to “finish strong down the stretch.”

Advisers to Bloomberg, 80, expect him to again emerge as one of the largest — if not the top — donor to Democrats. In 2020, he spent north of $1 billion on his presidential campaign that lasted just over four months. The cycle prior, when House Democrats recaptured the House, the party won all but three of the roughly two dozen House races that Bloomberg sought to sway with his money — accounting for nearly $60 million of the more than $110 million he spent on Democrats that year.

The queen’s death opens the floodgates on self-rule campaigns