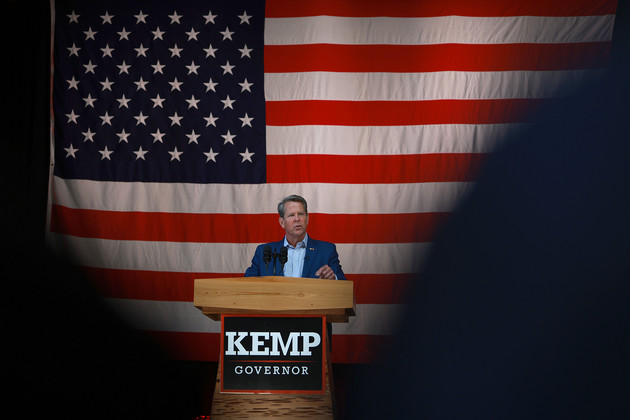 One withstood Donald Trump’s pressure campaign to overturn the 2020 election, serving as a bulwark as other Republicans buckled. The other actively participated in the former president’s scheme to keep himself in office.

Georgia voters could be forgiven for feeling confused about the pair of Republicans seeking the top two state offices in the November election: incumbent Gov. Brian Kemp and lieutenant governor candidate Burt Jones.

Jones — a 43-year-old state senator, former captain of the University of Georgia football team and self-funding heir to an oil fortune — could be indicted soon after he wins the No. 2 job, as polls indicate he will. He was among the 16 fake electors who tried to block Joe Biden’s win in Georgia. And Jones continued to deny the election results for months afterward, actions that have come under scrutiny from law enforcement officials in Georgia. Jones earlier this year was issued a subpoena by the Fulton County District Attorney’s office as part of its investigation into the false electors plan and Trump’s actions in Georgia. But a judge ruled in July that that office had a conflict of interest, and that any decision whether to charge Jones would be made by another prosecutor’s office.

Kemp has been called as a witness in the fake electors probe.

Now, Kemp and Jones are trying to co-exist at the top of the ticket; in Georgia, the governor and lieutenant governor are independent offices whose candidates seek election separately.

The pairing has produced an awkward spectacle. Kemp and Jones have appeared at just three campaign stops together since winning their respective primaries in late May, according to a review of public events, local news reporting and social media.

“We’re running as a ticket whether we like it or not,” Jones told a small crowd in Thomson, Ga. at a recent campaign meet-and-greet.

Instead of the GOP primary deciding whether Georgia would embrace or move past election conspiracies, Kemp and Jones represent the party’s two divergent and warring approaches to Trump. Nowhere in the country is the split between Republican election acceptors and election deniers in such stark relief.

“There’s two sides to what happened in the 2020 election,” said Norm Eisen, an ethics lawyer who served as special counsel to House Democrats during their first impeachment of Trump. “Kemp and [Secretary of State Brad] Raffensperger resisted Trump’s pressure, and Jones evidently capitulated to it.”

Georgia certified its election results for Biden on Nov. 23, 2020. But Jones wasn’t prepared to move on. Along with state party chair David Shafer, a Trump ally who supported his post-election lawsuits, Jones joined a group of alternate electors who aimed to give Georgia’s Electoral College votes to Trump instead of Biden.

On Jan. 5, Jones was invited to a fundraising dinner with Mike Pence at the Naval Observatory. Jones flew by private jet from Georgia with plans to hand deliver a letter asking the vice president not to certify the election results. He wanted Pence to delay the certification by two weeks to allow more time to investigate.

But Jones said that he left the missive in his Uber.

“I had an Uber driver, and I just told him to go on and wait on us. So I had it sitting out in the car. I never did bring it in. I could tell that it wasn’t going to happen,” Jones told the Atlanta Journal-Constitution.

Jones would post and then later delete a photo of him with Pence taken at the dinner. His campaign said that Pence and Jones did not speak at the event, which several other people attended.

Jones was not made available for an interview. In a statement, his campaign said he has “zero” regret about participating in the alternative electors plan. “It’s not a scandal, it’s a bogus political attack by Democrats and the media,” it read.

Jones continued to question the election results through the first half of 2021. And soon after he filed to run for lieutenant governor in Aug. 2021, Trump offered his “Complete and Total Endorsement.”

“No one has fought harder for Election Integrity than Burt,” Trump declared.

Jones kept up the election denial drumbeat throughout the primary campaign, including at a rally with Trump in late March.

“It could have been so simple to investigate,” the candidate told the crowd in Commerce, Ga. “But so many of the people in leadership did not want to do that. And I can tell you right now if you elect me as lieutenant governor, we’re going to restore confidence in our elections process.”

Jones went on to say he would get rid of Dominion voting machines and ballot drop boxes, both targets of Trump.

While Jones received Trump’s enthusiastic support, Kemp was the target of his scorn and ridicule. Trump helped recruit his primary challenger — former Sen. David Perdue — and issued statements saying that Kemp “deceived” the people of Georgia and was “terrible on election integrity.”

Kemp went to great lengths to not disparage Trump during the campaign, even saying he would welcome an endorsement if the former president changed his mind.

In the end, both postures toward Trump worked, Kemp trounced Perdue, 74 to 22 percent — succeeding wildly where most Republicans in Congress who crossed Trump over the election lost reelection or retired.

Jones, running against three Republican challengers, finished just above 50 percent in the May 24 primary, narrowly avoiding a runoff.

A change of tune in the general

But it’s one thing to stake a Republican primary campaign on a Trump-pleasing platform of election denialism — and another to do so in a purple-state general election. Jones seems to be softening his rhetoric as the general election progresses.

“The 2020 election, you know, is over with,” Jones said at the campaign gathering hosted by the Columbia County GOP on Sept. 7.

During his speech to the group, Jones recounted how he came to first run for public office and talked about how important it was that Georgia was the first state to allow businesses to reopen during the Covid-19 pandemic. He reeled off talking points about Democrats — accusing them of wanting to “defund the police,” impose lockdowns of businesses and churches during Covid, and fritter away the state’s budget surpluses. Jones singled out Stacey Abrams, the party’s nominee for governor, who Jones said had “handpicked” the party’s lieutenant governor nominee, Charlie Bailey.

During a Q-and-A session after his speech, Jones was asked by POLITICO how he would use the power of the lieutenant governor’s office to address the 2020 election results and if he would continue investigations into the election, as he suggested he would at the Trump rally. He seemed caught off guard.

“We never had anything in the Senate so far as we had some groups, oversight groups, that looked into different allegations that were made and things of that nature,” Jones said, searching for his words.

His response invited other election-related questions from attendees. One person asked him about food delivery trucks showing up at ballot processing places. A popular conspiracy theory after the 2020 election was that food deliveries for poll workers were actually part of a scheme to deliver more votes for Joe Biden.

Jones tried to deflect the question by suggesting that any concerns should be reported to local county officials. After pushback from the man asking the question, Jones suggested reporting election concerns to increasingly higher levels of authority, up to the secretary of state’s office.

“It’s a common refrain you see with these Trump people,” he said. “They never want to talk about what they actually did. Actually, it’s a thing that I saw as a prosecutor, I saw it all the time with defendants, they wanted to talk about anything else.”

If Jones wins the office of lieutenant governor, he wouldn’t be able to directly stop the certification of a future election. But he would have a bigger platform to encourage frivolous investigations into an election through his powers to oversee all state Senate business as president of the chamber.

As Jones awaits the next moves in the fake electors investigation, Kemp persuaded a judge to postpone his testimony in the case until after the election. The incumbent governor, meanwhile, has adapted to the reality that people who participated in the false electors effort are part of the GOP firmament in Georgia. He is not making a cause of ridding the party of them.

Kemp accepted $125,000 in campaign money from car dealership owner and fake elector Mark Hennessy. It was given in three installments, one before the primary and two after. Another fake elector, Vikki Townsend Consiglio, was re-appointed by Kemp to the state soil and water conservation commission in July.

Kemp did not respond to a request for comment made through his campaign.

As for the possibility of serving with Jones — both are favored to win their races in November — a Kemp campaign spokesperson said: “Governor Kemp has repeatedly said he supports the entire GOP ticket in Georgia.”