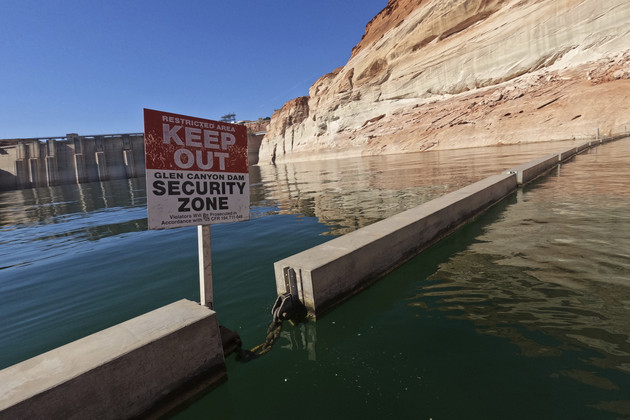 Water levels at Arizona's Glen Canyon Dam are predicted to next year fall within a few feet of the point at which hydropower production would cease. | Brittany Peterson/AP Photo

California’s offer to conserve some of its share of Colorado River water over the next few years won’t solve the looming water and power crisis in the West — but it might be enough to kickstart negotiations among the states on a deal that could.

The biggest hurdle to striking an agreement that would sharply curtail water use among the seven states that share the river has been the impasse between the two thirstiest states — California and Arizona — over which should shoulder the brunt of the cuts as climate change fuels the deepest drought in the region in 1,200 years.

California’s offer in a letter to federal officials last week to voluntarily reduce its consumption of Colorado River water by 400,000 acre feet per year between 2023 and 2026 doesn’t move the dial on that dispute. But it does represent the first time California — the biggest user and senior water rights holder on the system — has put an offer in writing. And it makes an explicit overture to other states to “immediately reengage” in broader negotiations.

“This is a step in the right direction,” Thomas Buschatzke, director of Arizona’s Department of Water Resources told POLITICO. “We absolutely agree with the need to continue the discussions as proposed in the letter to keep moving forward in a positive manner.”

Entrenched drought and decades of overuse have driven water levels at the river’s two main reservoirs precariously low, with levels at Glen Canyon Dam predicted to next year fall within a few feet of the point at which hydropower production would cease and the ability to deliver water downstream could be jeopardized. The federal Bureau of Reclamation has said that states need to conserve 2 million to 4 million acre feet next year just to head off a near-term disaster at the reservoirs.

The offer outlined by California’s agricultural and urban water agencies last week matches the proposal the Golden State made during negotiations on a multi-state deal in August, which Arizona rejected as insufficient, Buschatzke said.

Four hundred thousand acre feet represents 9 percent of California’s allocation of Colorado River water and only 20 percent of the lower end of the range of that federal Bureau of Reclamation says needs to be conserved. Arizona is using nearly 800,000 acre feet less than it is entitled to this year, whereas California is using its full allocation, and is pulling out additional water from Lake Mead on the Nevada-Arizona border that it had previously banked in the reservoir.

But whether California’s ante makes significant progress on the goals laid out by Reclamation depends on whether it represents the sum total of California’s contribution, or comes on top of mandatory cuts being floated by the federal government.

Although Reclamation didn’t follow through on its threat to act unilaterally to impose cuts in August when the states failed to reach a deal, Interior Department officials have been discussing a handful of levers at their disposal. Those include, most prominently, the option of subtracting the amount of water lost to evaporation or canal leaks from the total amount of deliveries that California, Arizona and Nevada are entitled to. This option could conserve a significant amount of water — an estimated 1.2 million acre feet — and could spread the pain proportionally among users in a way that is otherwise difficult to do within the water rights system.

Every state except California has publicly backed this option, and Interior officials recently told states to begin preparing for the changes in 2024, according to Buschatzke.

Chuck Cullom, executive director of the Upper Colorado River Commission, said adding those federally mandated cuts to California’s conservation offer appears to be the only way the states can get close to the amount of water savings Reclamation is seeking.

“We want to be clear that we see the contributions outlined by California would be in addition to, or on top of, the application of evaporation and losses in the lower basin,” he said.

But California’s offer appears to be aimed at heading off such moves.

“It is California’s intention that this proactive voluntary action builds on existing agreements, contracts, compacts, and water rights to catalyze broader basin-wide conservation and helps to avoid protracted litigation that might otherwise result from regulatory or mandated actions,” the California water agencies said in the letter last week.

The fact that California water users caveated their commitment as “voluntary” is also controversial. In 2021, California agreed to voluntary reductions in use as part of a deal with Arizona and Nevada to try to stabilize levels at Lake Mead, but the state wasn’t able to follow through with its part of the agreement, said Sarah Porter, director of the Kyl Center for Water Policy at Arizona State University.

“That it’s voluntary makes it a little bit weaker, even weaker than it might seem when you look at the number,” Porter said. “It’s simply not the same thing as saying, ‘We will take a cut.”

And the reductions floated by the Golden State are a short-term fix for the next three years — seen by many as simply a band-aid meant to stave off an imminent disaster at the reservoirs — rather than a long-term solution to refill reservoirs and address the worsening condition of the river that climate scientists say will be the new normal.

“While the reductions proposed by California are step in the right direction, it is imperative to implement meaningful, permanent solutions to reduce water demands to help stabilize the Colorado River system and Lake Mead,” the Southern Nevada Water Authority, Nevada’s lead agency on Colorado River issues, said in a statement.

The river’s major players broadly recognize that such deals will be needed in the near-term, as longer term solutions like upgrading irrigation infrastructure and removing grass from desert cities, are implemented — though how money should be spent on those short-term efforts is a major point of controversy.

The California water agencies said their offer is dependent on federal funding to compensate users — and additional federal funding to deal with the environmental crisis at the Salton Sea. That water body is fed by irrigation runoff from the Imperial Irrigation District; as that runoff is reduced for the purposes of conservation, the sea will further shrink, exposing toxic dust that threatens air quality for nearby communities.

But, California doesn’t name a price in the letter. A spokesman for Imperial, a signatory of the letter and the largest single user of Colorado River water, said the district has discussed funding with federal officials, but did not name a figure.

Congress approved $4 billion in drought relief as part of Democrats’ Inflation Reduction Act — a large pot of money, but one that certainly won’t be enough on its own, especially at the rates that some farmers were seeking for a single year’s worth of conservation during the run-up to Reclamation’s August deadline. Those rates so alarmed some players that Nevada’s lead Colorado River negotiator warned of “drought profiteering.”

“There is definitely a disagreement over whether dollars should be given — let’s just put it out there — to farmers to use less water temporarily,” said ASU’s Porter. “Four billion is a lot of money, but if we were paying the farmers at the levels they’re asking, it wouldn’t be sufficient.”

Interior officials have said they plan to put out two separate funding opportunities related to the $4 billion from the IRA — one focused on near-term deals like the one put forth by California, and another for projects that make longer-term water use reductions. There has also been discussion of giving participants in near-term projects priority for receiving awards in the second round, a factor that could have motivated California to formalize its conservation proposal last week.

But, despite all the tensions California’s letter raises, outside observers say the fact of a formal offer at all from the largest player on the river is an important move at a time when negotiations have been stalled.

“Rather than waiting for the laborious process of these complex interlocking agreements where everybody agrees to how much they’re going to cut, for California to say, ‘This is important, we’re going to go it alone” — that’s really important because the attempt to negotiate shared sacrifice is gridlocked,” said John Fleck, a water policy professor and writer at the University of New Mexico.