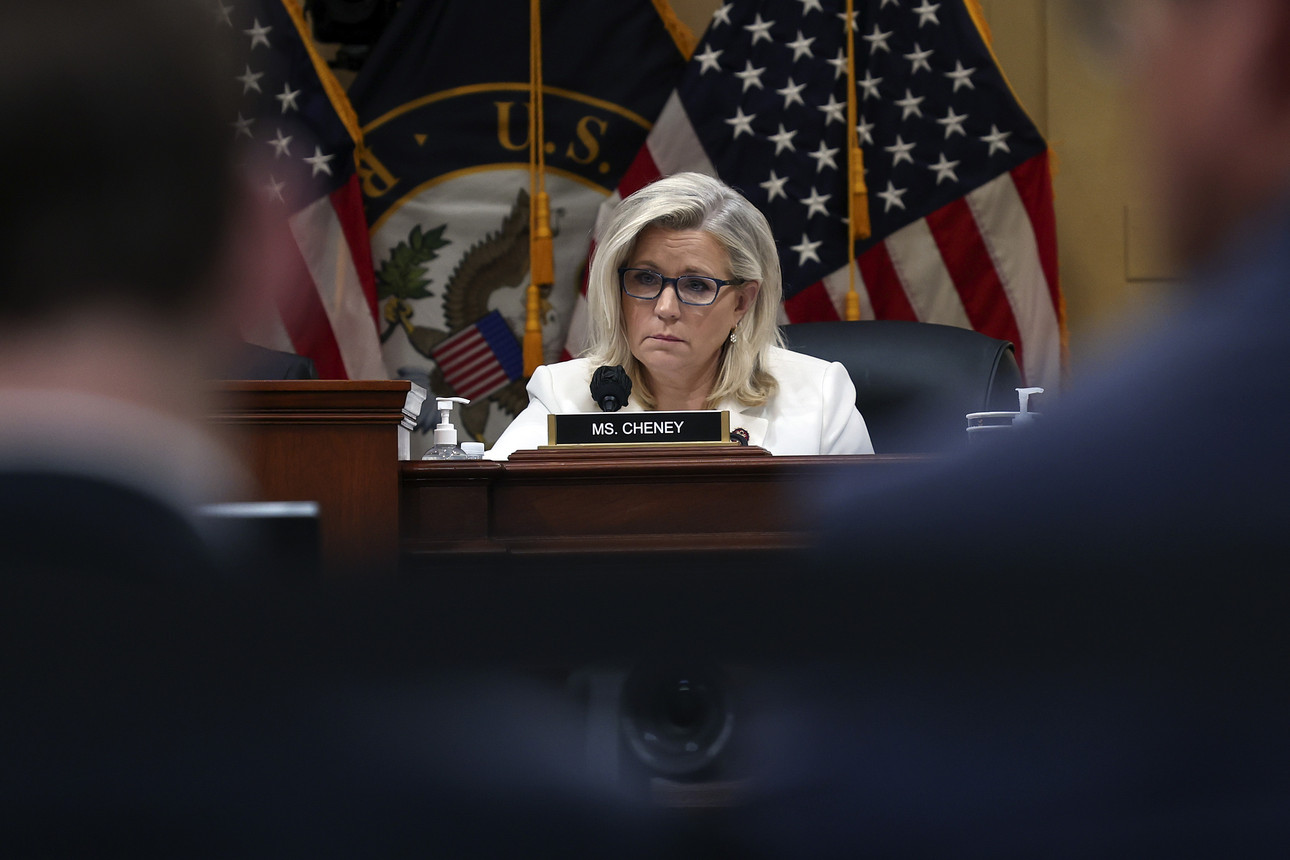 Rep. Liz Cheney recently started acknowledging the likelihood of losing her seat — an outcome that she forcefully dismissed a year ago. | Win McNamee/Getty Images

For a year now, Cheney has wielded an unrivaled megaphone as the GOP’s voice of Trump opposition, using her role on the Jan. 6 select committee to keep political pressure on her nemesis. But the side-by-side federal probe is now a live feed of anti-Trump counter-programming, one the Wyoming Republican welcomes yet must share the spotlight with as she and the rest of the select panel keep designing future presentations that portray the former president as a threat to American democracy.

“We’ve always felt that we have parallel but separate missions, and the committee is going to continue to do the committee’s work,” Rep. Stephanie Murphy (D-Fla.), a select panel colleague of Cheney’s, said about the DOJ investigation. “For me, none of this is political.”

Yet for Cheney, the political consequences will be evident on Tuesday. She is likely to lose her House seat to pro-Trump Harriet Hageman in the GOP primary, according to most public polls, despite an active effort to corral support from Wyoming Democrats who have welcomed her work on the Jan. 6 panel.

That loss is likely to only heighten the importance of Cheney’s role in the Capitol attack investigation in terms of keeping her name in the mix ahead of a 2024 presidential field that she has not ruled out trying to join — if she can find a lane as a Trump spoiler without helping him by serving as a foil. And some fellow Republicans predict she’ll have no trouble commanding attention, even if she loses her House seat, thanks in large part to her select committee platform.

“Regardless of the outcome of the election, she’ll still continue to be engaged for the next few months here in Congress,” said Rep. Dan Newhouse (R-Wash.), one of only two House Republicans who voted to impeach Trump over Jan. 6 and later prevailed in contested primary battles. “She’s still part of the committee investigating … and I think she’ll continue to carry on.”

Jan. 6 panel members, all appointed by Speaker Nancy Pelosi, vow they’ll continue their work through the end of this Congress, even as Capitol Hill’s focus starts shifting to the handling of classified documents the FBI found at Trump’s Mar-a-Lago home and the DOJ’s investigation of efforts by Trump and his allies to subvert his loss to President Joe Biden.

Investigators for the panel are still interviewing witnesses ahead of more hearings expected next month, with Cheney set to continue in her high-profile vice chair seat. As the investigation wraps up, members are still planning a final report ahead of the midterms detailing their findings on the attack and how to prevent future threats moving forward.

“We have a charge to investigate the violent assault on our democracy on January 6 and to report on recommendations for our national response,” said panel member Rep. Jamie Raskin (D-Md.) when asked whether the outcome of Cheney’s primary would affect the committee’s work. “Electoral outcomes, in the meantime, have no bearing on our work.”

Some pro-Cheney signs were visible in Jackson during the runup to the primary, showing support for a hometown politician, and there were signs that her strategy to hang on is succeeding on some levels. Bryan Tarantola, 75, a Democrat and longtime Wyoming resident, said he has registered as a Republican this election year so he can vote for Cheney in the primary.

“There’s not much about the Cheneys that I care for,” Tarantola said in an interview in a cigar lounge in Jackson Hole. “But her opposition [to Trump] would tell you that Liz is displaying Wyoming values. Liz is showing honesty, integrity, courage — which I always thought were traditional Wyoming values. At least they were in the Wyoming in which I grew up.”

Still, the town itself is one of two blue dots in a sea of red within the state that swung towards Trump by almost 70 percentage points. Jackson native George Dykes, 53, said he’d supported the Cheney family for years and recalled seeing former Vice President Dick Cheney’s daughter walk into the office of former Sen. Craig Thomas (R-Wyo.), where he once worked.

But Dykes soured on the family altogether over Liz Cheney’s service on the Jan. 6 committee, arguing that she had fed into a Democratic narrative and adding that while “I don’t necessarily love Hageman, I’m done with Cheney.”

“She’s dead to me,” he said. “I will never support that family again.”In other words, Cheney’s beliefs make the Wyoming native the outsider now.

Things were very different even 18 months ago, as Cheney’s trajectory in a Trump-dominated GOP rapidly veered off course after the violent Capitol siege by his supporters. When she cast her vote to impeach Trump last year, then serving as the No. 3 in House leadership, she was the highest ranking Republican to publicly declare Trump was unfit to serve as president.

Cheney’s decision shook Trump’s second impeachment with seismic force. Some still argue that her vote gave cover to the other nine House Republicans who joined her. Undoubtedly it squashed the once-budding view of Cheney as a future speaker, and soon afterward her frequent criticisms of Trump got her ousted from the House GOP’s No. 3 leadership slot.

When she delivered the morning prayer before the conference meeting that removed her from that post, she chose the Bible verse that states “the truth shall set you free.”

Indeed, she has seemed liberated even further by her wholehearted rejection at the hands of House Republicans after accepting Pelosi’s appointment to the Jan. 6 panel. Retiring Rep. Adam Kinzinger (R-Ill.), who’s as open as Cheney in condemnation of Trump, joined her on the select panel after House Minority Leader Kevin McCarthy boycotted it in protest of Pelosi’s move to block two of his picks.

But Cheney’s mission of stopping Trump at all costs necessarily requires her to remain relevant in the national conversation. She’s recently started acknowledging the likelihood of losing her seat — an outcome that she forcefully dismissed a year ago. McCarthy, who rarely gets formally involved in primaries, long ago endorsed her opponent.

And even if losing won’t stop her from diving into the Jan. 6 panel until the day that Republicans likely take over the House, the FBI search of Mar-a-Lago means she’ll be vying for oxygen with other well-known lawmakers.

House Intelligence Chair Adam Schiff (D-Calif.), a select panel member, and House Oversight Chair Carolyn Maloney (D-N.Y.) on Saturday pressed Director of National Intelligence Avril Haines for a “full review” of the potential damage caused by the removal of classified White House documents from Trump’s estate. It’s likely other congressional committees in both chambers with jurisdiction over the controversy will weigh in too.

Another possible wrinkle for Cheney posed by DOJ’s increasingly public Trump investigation: its potential to unite a GOP that’s often struggled to mount an effective response to the Jan. 6 committee’s damaging deluge. Trump-aligned Republicans briefly appeared emboldened last week after the search of Mar-a-Lago, arguing before the full picture became clear that the former president was a victim of politicized law enforcement — a contrast to their vaguer rebuttals of the select panel.

But whether or not Cheney has to share investigative real estate with DOJ and more Democrats, she’s more likely to cede her seat after Tuesday than she is to give up her leadership of the GOP’s anti-Trump wing.

Who’s being cruel? Politicians debate use of migrants as pawns.