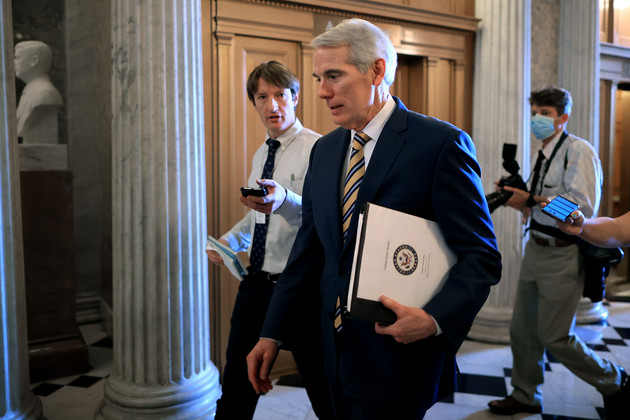 Sen. Rob Portman walks into the Senate Chamber before a vote at the U.S. Capitol in July 2021. | Chip Somodevilla/Getty Images

China has recruited Federal Reserve economists for more than a decade to share sensitive and confidential information about U.S. economic policymaking in a bid to gain influence over the central bank, a Senate Republican charged in a report Tuesday.

The report from Sen. Rob Portman of Ohio, the top GOP lawmaker on the Homeland Security committee, detailed what Senate investigators called “long-running and brazen actions by Chinese officials and certain Federal Reserve employees” to replicate the playbook China has used to infiltrate the science and technology sectors. It involves recruiting industry experts to provide proprietary information or research in exchange for monetary benefits or other incentives, it said.

The Fed has failed to effectively combat the threat and doesn’t have sufficient expertise in counterintelligence or adequate policies to thwart China’s influence campaign, which includes efforts to obtain information about interest-rate decisions, the report concluded. It calls on Congress to enact bipartisan legislation that would enhance security around federally funded research, among other measures.

“This investigation makes clear that China’s malign efforts at influence and information theft are not limited to science and technology fields — American economic and monetary policy is also … being targeted by the Chinese government,” Portman said in a statement.

“The Chinese government is using every tool at its disposal to infiltrate and steal valuable information,” he added. “We cannot let the American taxpayer continue to unwittingly fund China’s military and economic rise which is why our report makes strong recommendations to enhance and protect our Federal Reserve.”

In a letter to Portman, Fed Chair Jerome Powell said he had “strong concerns about assertions and implications” in the report and insisted that “everything we do at the Federal Reserve is in service to our public mission to American households, businesses and communities.”

“We are confident that Federal Reserve staff understand their obligations and are committed to maintaining both the confidentiality of sensitive information and the integrity of our workforce,” Powell wrote in a letter Monday. “Because we understand that some actors aim to exploit any vulnerabilities, our processes, controls and technology are robust and updated regularly. We respectfully reject any suggestions to the contrary.”

The report arrives as U.S. officials are grappling with how to resist China’s efforts to become the world’s dominant economic and military superpower, while at the same time maintaining diplomatic ties necessary to cooperate in such areas as climate change and global public health issues.

Its release also comes as the Fed is playing a more pivotal role in U.S. economic policymaking than any government agency, trying to rein in the worst inflation in four decades while avoiding a recession in the world’s biggest economy.

A spokesperson for the Chinese embassy in Washington said the report’s warnings “are full of Cold War zero-sum thinking and ideological prejudice.”

“The cooperation between China and the U.S. in economic, financial and other fields is open and aboveboard, which has played an important role in enhancing mutual understanding and mutual trust between the two countries,” spokesperson Liu Pengyu said. “The U.S. should take off its colored glasses and stop disrupting local and non-governmental exchanges between the two countries.”

According to the report, the Fed’s own counterintelligence investigators found “alarming” actions or connections by more than a dozen employees across the Fed system, as part of an investigation that began in 2015. Dubbed by Fed investigators as the “P-Network,” the employees had similar travel patterns and professional backgrounds, as well as close ties with Chinese government institutions or programs, including China’s central bank, and with known members of China’s talent-recruitment programs.

China uses a number of tactics to target Fed employees, the report said, “from outright threats and coercion, to softer tactics, such as talent recruitment programs, professorships at Chinese universities, paid travel to speak at conferences and research collaborations.”

“The motivation, however, is the same: China obtaining access to sensitive economic and monetary policy information,” the report said.

In one incident in 2019, Chinese officials detained a Fed employee four separate times during a trip to Shanghai and threatened his family unless he provided them with economic information and assistance, according to the report.

The employee’s phones were allegedly tapped, and Chinese officials copied contact information from other Fed officials from the employee’s WeChat account. The employee notified the Fed, which contacted the FBI.

A senior Fed economist at a regional Fed bank, who also had close ties to talent-recruitment plan members, was found to have communicated directly with China’s Xinhua News Agency — which the U.S. designates as a foreign agent and China’s main propaganda arm — to “share articles, offer assistance with press questions and invite officials to visit Washington” and the city where his Fed bank was based, the report said.

Another senior economist at a regional Fed bank with access to highly sensitive information attempted on at least two occasions to transfer large volumes of data to an external site, according to the report. In 2015, the employee also received an email from a Chinese government official seeking non-public insight into three regional Fed presidents’ views on interest-rate hikes. The employee shared the views of their home bank’s president, a move that Fed officials said was “inappropriate and concerning.”

In his letter to Portman, Powell said the Fed takes seriously any alleged violation of its information security policies and would be concerned about “any supportable allegation of wrongdoing.”

“In contrast, we are deeply troubled by what we believe to be the report’s unfair, unsubstantiated and unverified insinuations about particular, individual staff members,” he added.

He also defended the Fed’s culture of collaborating with scholars around the world “with the aim of deepening and broadening our understanding of critical issues.”

Yet even after investigating the above incidents and receiving recommendations from the FBI about how to combat China’s campaign, the report said the Fed “did not take any steps to update its policies to account for threats from China until after the Committee initiated its inquiry.”

The Fed has since revamped its policies to prohibit employees from accepting compensation from certain restricted countries, including China, but the report said the policies are insufficient because they don’t require employees to disclose their membership in a talent-recruitment plan.

Thus, some employees with known ties to such programs still maintain access to sensitive information, according to the report.

The report says the Fed should develop comprehensive plans to safeguard U.S. intellectual property and confidential information and enhance its relationship with law enforcement agencies and the intelligence community.

“The timely and robust sharing of information—including classified intelligence products—is needed between law enforcement and intelligence agencies and the Federal Reserve to ensure that threat information is accessible and actionable,” the report said.