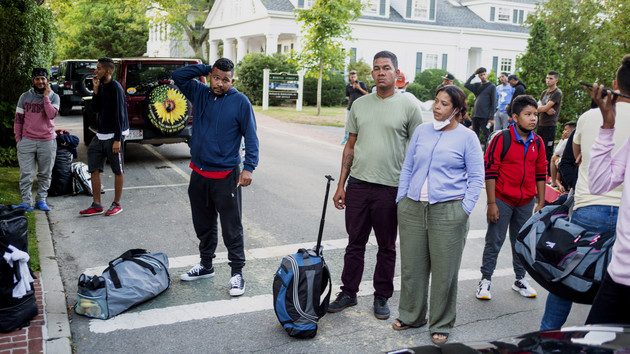 The lawsuit, filed by the Boston-based Lawyers for Civil Rights, alleges that DeSantis and state transportation officials violated the migrants’ constitutional rights by coercing mostly Venezuelan asylum-seekers onto planes in Texas to the island through “false promises and misrepresentations.” It also accuses DeSantis of inappropriately using federal coronavirus relief funds to pay for the flights.

The lawsuit also asks a judge order DeSantis to stop transporting migrants in the future. The Florida governor has promised to continue flying migrants to Democratic strongholds and on Tuesday sent White House and Delaware state officials scrambling to prepare for the arrival of more migrants in Delaware amid speculation that he was sending migrants to that state.

“No human being should be used as a political pawn in the nation’s highly polarized debate over immigration,” Iván Espinoza-Madrigal, executive director of Lawyers for Civil Rights, which is providing free legal assistance to the migrants who landed on Martha’s Vineyard, said in a statement.

The lawsuit represents the first legal action against DeSantis over the migrant transport last Wednesday from Texas to Martha’s Vineyard. Some Democrats, including California Gov. Gavin Newsom, have called on the Justice Department to investigate the Florida governor over the flights but the DOJ has not taken any action.

Democrats have expressed outrage over the transports and characterized it as a political stunt with little regard for the asylum-seekers while Republicans have praised DeSantis, claiming he’s brought attention to the Biden administration’s border policies. Texas GOP Gov. Greg Abbott has also transported thousands of migrants from the southern border to Chicago, New York City and Washington, where they have crowded city shelters.

The 35-page complaint filed in U.S. District Court in Boston offers one of the most detailed accounts yet of how roughly 50 migrants found themselves on two planes that unexpectedly landed in Martha’s Vineyard last week, and trauma their new lawyers say they’ve suffered from their ordeal and from being thrust into the center of the national debate over immigration.

The plaintiffs include three Venezuelan migrants who boarded the planes to Martha’s Vineyard along with their family members as well as Alianza Americas, a Chicago-based advocacy group for Latino immigrant communities.

The complaint alleges that people working for DeSantis were “trolling streets outside of a migrant shelter in Texas and other similar locales, pretending to be good Samaritans offering humanitarian assistance,” including $10 McDonalds gift cards and free hotels while making “false promises and false representations” of employment, housing and educational opportunities awaiting the migrants in either Boston or Washington, D.C.

They were also allegedly told they would receive assistance with their immigration proceedings at their final destination and were “intentionally sequestered” before their departure from Texas “so they could not discuss the arrangement” and so that the migrants “would be less likely to leave or change their minds.”

Instead, the migrants were flown to Martha’s Vineyard off the coast of Massachusetts, where “no one” on the island or “anywhere in Massachusetts” knew they were coming. They were given pamphlets “lifting language” from the state’s Refugee Resettlement Program — which the lawsuit argues none of the migrants are eligible for. And the people who recruited the migrants for the flights were “unreachable by phone” after they landed in Massachusetts.

“These immigrants, who are pursuing the proper channels for lawful immigration status in the United States, experienced cruelty akin to what they fled in their home country,” the plaintiffs argue. “Defendants manipulated them, stripped them of their dignity, deprived them of their liberty, bodily autonomy, due process, and equal protection under law, and impermissibly interfered with the federal government’s exclusive control over immigration in furtherance of an unlawful goal and a personal political agenda.”

“It is opportunistic that activists would use illegal immigrants for political theater,” she said in a statement. “If these activists spent even a fraction of this time and effort at the border, perhaps some accountability would be brought to the Biden Administration’s reckless border policies.”

Lawyers for Civil Rights previously called for Massachusetts Attorney General Maura Healey, a Democrat and frontrunner for governor, and U.S. Attorney for Massachusetts Rachael Rollins to open a criminal investigation into the migrants’ plight.

A Texas sheriff did just that on Monday: Bexar County Sheriff Javier Salazar, an elected Democrat, said that while he could not cite specific laws that may have been broken by relocating the migrants, his office will be investigating what he called an “abuse of human rights.”

DeSantis has continued to defend his actions, claiming last week that the migrants voluntarily boarded the flights and weren’t coerced. He has argued that Florida’s Republican-led Legislature approved $12 million to transport migrants out of the state, though Democrats have claimed the flights are improper uses of the allocated funds.

Massachusetts Gov. Charlie Baker, also a Republican, told reporters on Tuesday that Salazar did “the right thing” by opening an investigation into DeSantis’ actions and that sending migrants across the country, potentially under false pretenses, is “just a really lousy thing to do.” But he stopped short of directly condemning DeSantis, who he said he hasn’t spoken to since the migrants landed on Martha’s Vineyard last Wednesday.

It’s not impossible that Putin could use nuclear weapons, Austin says