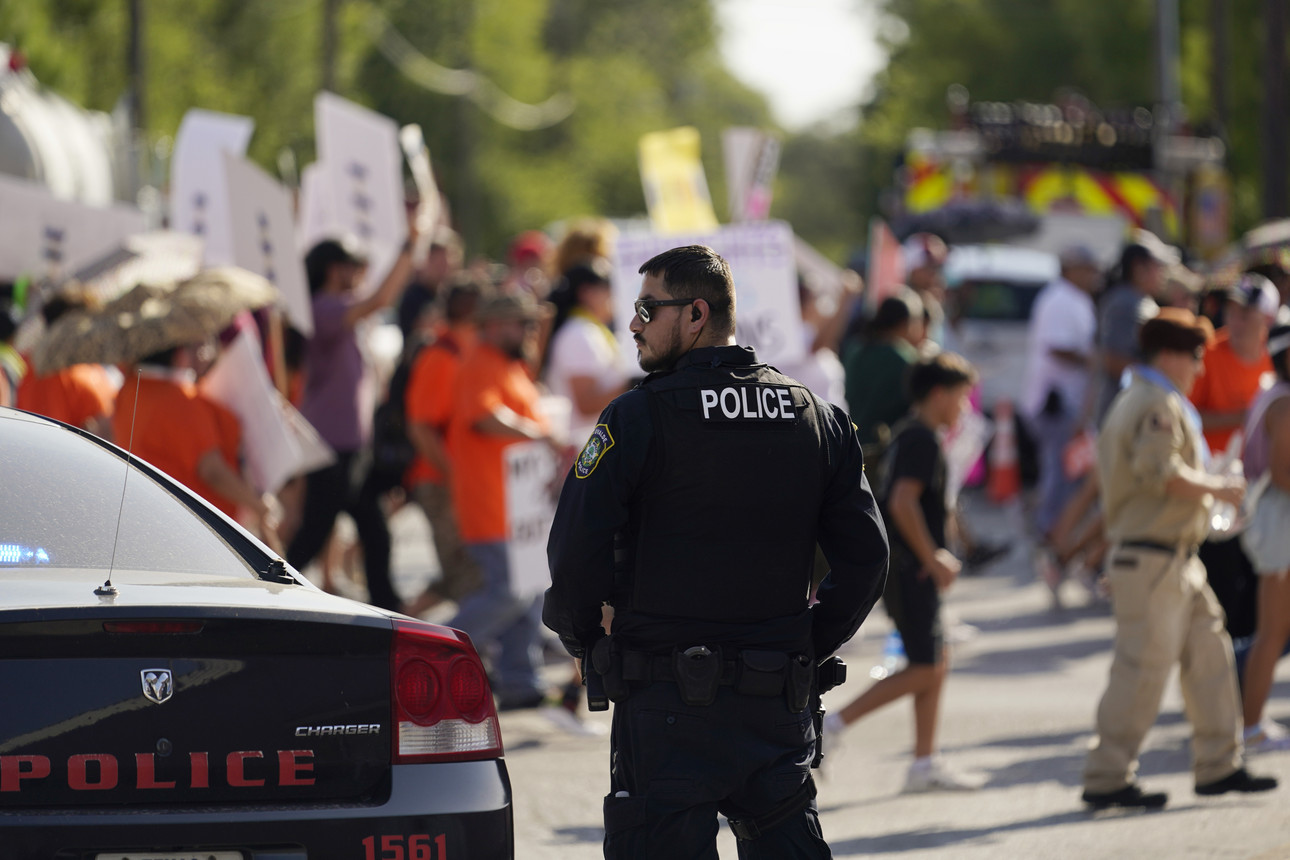 A Uvalde Police Department officer watches as family and friends of those killed and injured in the school shooting at Robb Elementary take part in a protest march and rally, on July 10, 2022, in Uvalde, Texas. | Eric Gay/AP Photo

The springtime massacre at Robb Elementary School has set off a renewed scramble to lock down America’s classrooms.

Texas is distributing tens of millions of dollars to equip schoolhouse cops with bullet-resistant shields and for campus panic alarms. A $50 million Arkansas grant program, approved by the legislature this month, could help schools hire more armed guards. Ohio teachers can now carry weapons in classrooms after a few days’ training under a law Republican Gov. Mike DeWine signed in June.

These patchwork efforts to sharpen school security after the killing of 19 students and two teachers in Uvalde, Texas, are overlapping with new federal legislation to create a sweeping effort to tamp down gun violence.

But lawmakers, superintendents, educators and parents are confronting a difficult and all-too-familiar challenge as classes resume: How to protect schools without turning buildings into de facto fortresses.

“The rigor and the academics, all of that is important” to parents, New York Commissioner of Education Betty Rosa said in an interview. “But they want to send their kids to school and make sure that they come home. We are looking at safety, not just from the health perspective, but safety for the classroom.”

Growing numbers of public schools have brought more security guards, video surveillance and controlled entryways into their buildings during the past decade. Yet federal data show fatal or injury-causing gun attacks occurring on public and private K-12 school property reached their highest level in 20 years during the 2020-21 academic term.

President Joe Biden’s Education Department is at the center of implementing a new school safety response, as communities retread security strategies and civil rights groups join members of Congress to warn of the consequences surrounding the nation’s latest march to secure schools.

“I believe we need a new approach,” Assistant Education Secretary Roberto Rodríguez said in an interview. “We know that the best measures that support safety and well-being for our students are not just plans that address safety issues within the school, or that address so-called ‘hardening’ of our schools.”

Hardened security is still the defining feature of this year’s back-to-school season.

Schools in North Carolina’s rural Madison County have stored assault rifles and door breaching equipment on campuses for school-based police to use in the event of a mass shooting, and staged a large emergency training exercise at the local high school days before classes reopened Aug. 22.

“You can do all the things you want to do with curriculum and advance everything that goes on with teaching and learning,” Diaz said in an interview. “But if parents don’t have the feeling that they can drop off their kids and pick them up safely in the afternoon — we haven’t done anything.”

Ohio is in the process of distributing $100 million for schools to pay for equipment such as security cameras and automatic door locks with help from federal Covid-19 relief funds. Democratic-led states are also hammering down on reporting for students who could be seen as threats, raising concerns from school security and civil rights experts.

Some districts are struggling to find the right balance amid changing political winds. Police-student interactions, for example, are sure to increase in the Fresno Unified School District this fall. The California system removed armed officers from its middle schools in 2020 during the aftermath of George Floyd’s killing at the hands of Minneapolis police. After Uvalde, it’s bringing police back to school.

In New Jersey, Gov. Phil Murphy this month signed a new law requiring school districts and charter schools to set up threat assessment teams by the 2023-2024 school year to help identify “students of concern,” assess those students’ risk for engaging in school violence and intervene to manage the risk.

New Jersey’s legislature is also considering a bill that would allow county sheriffs to hire and place armed retired police officers in schools to assist with security. New York lawmakers in June passed a law that orders schools to consider using panic alarms as part of their safety plans; similar laws have also been considered in Nebraska, Texas and Virginia.

Americans broadly supported having armed police, metal detectors and student mental health screening in the wake of the Uvalde massacre, but not armed teachers, according to a June poll commissioned by the Phi Delta Kappa International education group. Public school parents were also more likely to support the presence of armed officers in schools compared to adults overall.

But while nearly 80 percent of school leaders described their schools as extremely or very safe in a recent survey commissioned by the National Association of Secondary School Principals, only 53 percent of students said they felt the same way.

Frank DeAngelis, the principal of Columbine High School in Littleton, Colo., when two gunmen killed 12 students and one teacher in 1999, ranks among the educators acknowledging the need for security while pushing for an updated approach.

“We continue to hear about these school shootings that happen around our country,” DeAngelis said this month during an appearance at the Columbine memorial. “But how many have been stopped because of things we have in place now that we didn’t have back in place prior to Columbine? I think that’s the important thing.”

Yet hardware only addresses part of the problem, he said.

“When you have cameras in buildings or metal detectors in buildings, it creates this false security,” DeAngelis said. “Kids have to feel that they have an adult that they can turn to … Because that one adult can make the difference.”

Marc Zimmerman, co-principal investigator of the National Center for School Safety, said metal detectors, single points of entry and school officers should be combined with resources that properly flag students in crisis to help them before violent acts occur.

“It makes us feel good, it makes us look like we are doing it, we check the box [and say] this is a safe school because kids have to go through a metal detector, but you might ask the kids in the school who say, ‘I feel safe from a gun but I get bullied all the time,’” Zimmerman said of hardening measures. “It’s a learning environment, so how do we create an environment where kids can learn and not be afraid?”

In places like Fresno and Brooklyn, activists warn Black and Latino students will suffer from something beyond Covid-19’s basic learning disruptions — that more interactions with police and beefed-up classroom security will criminalize groups that are already overrepresented in the country’s prisons.

Now members of Congress and civil rights groups are pushing the federal Education Department to set the tone for using resources from the Bipartisan Safer Communities Act.

Signed into law in June by Biden after it won swift congressional approval following the Uvalde attack, the law includes $1 billion for grant programs intended to train and boost the number of mental health professionals, counselors and social workers in schools. The Education Department will also oversee the distribution of $1 billion in funding for improving school conditions greenlit by the law.

But the law “did not do enough to ensure federal investments are made to promote student care over school hardening,” a group of prominent organizations including the National Education Association teachers’ union, NAACP Legal Defense and Educational Fund, and The Education Trust wrote in an Aug. 3 letter to top federal officials.

“School policing and other school hardening practices not only create a negative and fearful learning environment but can also lead to the physical harm of children,” the groups said.

Lawmakers also noted the law’s $300 million in funding for a Justice Department school security grant program that can pay for police training, metal detectors and locks. Rodríguez, the department’s assistant secretary, said the agency has met with roughly 20 groups about their concerns as the agency plans new guidance to begin setting out the law’s implementation.

“We’ve heard from some of those groups about the importance of inclusive and nondiscriminatory practices,” Rodríguez said. “We’ve heard that they’re looking for greater clarification around research-based approaches around how to use these dollars, and that they’re looking, and very attentive to, the benefit for broader communities — not just school-based violence, but broader community violence that we know impact students.”

The federal government’s latest emphasis on school climate and student mental health, he said, haven’t historically been part of the school safety response to tragic events.

After nearly a quarter-century of American school shootings, that could change.

“That is a different element in the moment that we’re in,” Rodríguez said. “Congress has affirmed that. They’ve made it really clear that [the law] is not just about providing dollars for additional ‘hardening,’ so to speak, but really to support the safety, the health and the well-being of students.”