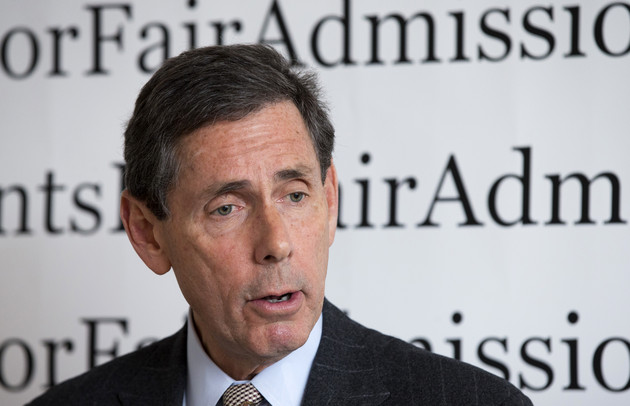 American colleges have had the Supreme Court’s blessing for more than four decades to factor race into their admissions processes — and now they’re preparing for a future without it.

Students for Fair Admissions, led by longtime affirmative action opponent Edward Blum, is challenging race-conscious admissions practices before the high court on Monday in two cases against Harvard University and the University of North Carolina at Chapel Hill.

Blum’s strategy has come a long way since his failed attempt to get the Supreme Court to side with Abigail Fisher, a white female University of Texas at Austin applicant who believed she was denied because of her race.

Affirmative action in higher education has endured by relying on moderate justices like Sandra Day O’Connor, only to see the court remade by Donald Trump and Sen. Mitch McConnell (R-Ky.). The need for negotiation is over on an issue that sharply divides Chief Justice John Roberts from the liberal justices, particularly Sonia Sotomayor. And striking the policies down could also open up broader legal attacks on the use of affirmative action in employment.

Blum’s group, which says it represents about 20,000 students, has asked the high court to overturn its ruling in Grutter v. Bollinger, a 2003 landmark decision that held colleges can consider race and use holistic reviews as long as their affirmative action programs are narrowly tailored.

It’s a move education and civil rights groups fear will exacerbate inequality for years to come. They point to race-neutral college admission policies in California, Michigan and other states where the practice is banned and diversity has declined. A race-blind admissions standard, they say, fails to take into account discrimination and other barriers Black and brown students often face.

“There is no workable alternative to achieving the kind of diversity we have today and that we’ve had for decades,” said Lee Bollinger, president of Columbia University and lead defendant in Grutter.

Overturning Grutter will be a set back for not just higher education, he said, but for all sectors.

“It would put us into a new era in which we would fall back on society’s efforts to address issues of racial injustice that are part of our history — and tragically so — and continuing to this day,” he said.

Many voters also see affirmative action practices at colleges as positive. A recent POLITICO/Morning Consult poll, conducted in mid-October, found that 39 percent of voters believe the advantages of race-based affirmative action in education for “minority groups” are more important than the disadvantages for others.

But some of Blum’s allies find the programs short-sighted.

“The race-conscious admission policies not only cause severe harm to Asian American communities, but also failed to help the blacks and Hispanics,” the Asian American Coalition for Education has said in a statement. “It is at best a ‘Band-Aid’ that conceals rather than addresses the real root causes behind a lack of diversity on many college campuses.”

Here are three things to know as the Supreme Court weighs the future of race in college admissions:

Sotomayor and Roberts have clashed on this before

Sotomayor is the only sitting justice on the high court to rule in favor of upholding race-conscious admissions in Fisher v. University of Texas, Blum’s prior attempt to ban it in higher education. She’s made her stance clear, often saying she is a “product of affirmative action.”

Perhaps the clearest example of the first Latina justice’s views on affirmative action in higher education is her 58-page dissent in a case where the Supreme Court upheld Michigan’s constitutional amendment banning the practice in public university admissions. The 2014 case became a defining moment in Sotomayor’s tenure, as she chose for the first time to read her dissent from the bench — a sign of the fiercest opposition.

She has also sparred with Roberts over past affirmative action rulings.

In the chief justice’s 2007 opinion in the Parents Involved in Community Schools v. Seattle School District No. 1, Roberts was skeptical of how a K-12 school system sought to address segregation.

Years later, in the 2014 dissent Sotomayor read from the bench, she called the majority opinion penned by Roberts “a sentiment out of touch with reality” — and reworded his famous phrase.

“The way to stop discrimination on the basis of race is to speak openly and candidly on the subject of race, and to apply the Constitution with eyes open to the unfortunate effects of centuries of racial discrimination,” she wrote.

To which Roberts responded: “It is not ‘out of touch with reality’ to conclude that racial preferences may themselves have the debilitating effect of reinforcing precisely that doubt, and — if so — that the preferences do more harm than good.”

At least one justice is ready to overturn Grutter

Justice Samuel Alito wrote the dissent against the opinion in Fisher and was joined by Roberts and Clarence Thomas. They believed the University of Texas’ admissions program was not tailored narrowly enough and did not consider race-neutral alternatives.

But Thomas wrote a separate, one-page dissent to proclaim that the use of race in admissions decisions is “categorically prohibited by the Equal Protection Clause.”

“The Court was wrong to hold otherwise in Grutter v. Bollinger,” he wrote. “I would overrule Grutter.”

But the cases the Supreme Court is hearing Monday will be the first time the justices have been directly asked whether race-conscious admissions should be overruled, according to David Hinojosa, director of the Educational Opportunities Project at the Lawyers’ Committee for Civil Rights. Hinojosa is expected to argue on behalf of the student intervenors in the UNC case.

Justices Neil Gorsuch, Brett Kavanaugh and Amy Coney Barrett have not yet ruled on a case involving race in admissions. They also didn’t rule on any affirmative action cases as appellate judges, but they are central figures in its future.

“Many of the justices on the record have overruled other important decisions,” Hinojosa said, alluding to the Dobbs v. Jackson decision this summer overturning Roe v. Wade. But he said the court’s reasoning to do away with precedent in that case doesn’t apply to UNC’s.

“We feel that we’ll be on the right side at the end of the day, because it’s very difficult to overturn a decision,“ he said. “Given the reliance interest on race-conscious admissions over the last 40 years and how these are tied to the original intent of the Equal Protection Clause in the 14th Amendment, we feel that it’ll make the court’s work a lot more difficult in trying to rationalize overturning … Grutter.”

Colleges and advocates plan for a new admissions strategy

Higher education groups are preparing for the end of race-conscious admissions policies.

“I would be less than honest if I were to say that I’m optimistic,” Paulette Granberry Russell, president of the National Association of Diversity Officers in Higher Education, said about Grutter’s odds before the Supreme Court. Her pessimism, she said, is spurred by the composition of the court and its recent decision “to ignore 50 years of precedent” in the Dobbs case.

While the Supreme Court could erase race from college admissions, admissions counselors have been working on best practices to boost recruitment among students of color.

Some university leaders in states where affirmative action is already banned, such as Arizona and California, say a ruling striking down Grutter won’t affect their admissions processes and they have ways of making sure their student body is diverse, such as ensuring low-income students have enough aid to enroll in their schools.