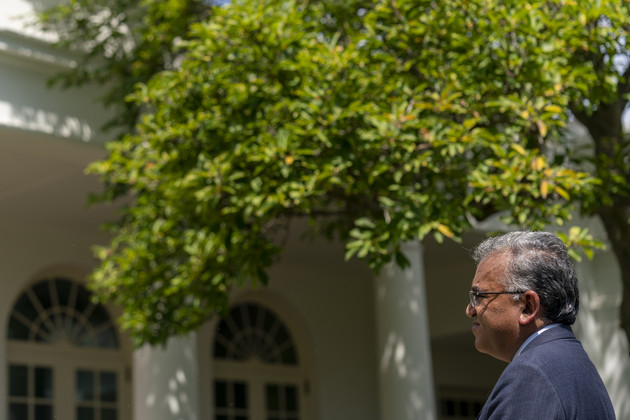 White House Covid Response Coordinator Ashish Jha, right, listens to President Joe Biden speak as he returns from COVID-19 during an event in the Rose Garden of the White House in Washington, July 27, 2022. | Andrew Harnik/AP Phoyo

The pandemic may not be over. But there’s a growing sense among officials inside the White House that their days on the front lines of the Covid fight may be numbered.

Even as it braces for a perilous winter, the Biden administration is planning a restructuring of its approach to major elements of the coronavirus response — a gradual shift that some administration officials now speculate could begin the phaseout of the White House Covid team as soon as the middle of next year.

Biden health officials are transitioning responsibility for distributing vaccines and treatments to the private market within six months. They’re telegraphing an end to the government’s declaration of the pandemic as a national emergency. And they’re spending the last of their cash reserves on a booster shot drive they hope will ward off the threat of a winter resurgence.

“We know how to manage fluctuations in Covid-19, and do so safely,” White House Covid response coordinator Ashish Jha said Tuesday. “If people step up and do what is necessary, we can get through this winter with far less suffering, far less death, far less disruption.”

The morphing of the federal response comes as the White House juggles cautious optimism about the pandemic’s trajectory with the stark reality there are fewer resources than ever to sustain its immediate operations.

Nearly two-and-a-half years into the crisis, Biden aides argue the development of vaccines and therapeutics has turned Covid from a mortal threat into a manageable disease for most. Yet, they harbor serious concerns about the ability to keep it that way without more funding.

Congress has refused for months to allocate the billions more dollars the White House says it needs to continue running a robust Covid response. The shortfall prompted sharp cutbacks to its efforts to stockpile tests and treatments and promote the vaccine. It also has accelerated internal work to plot a more sustainable, streamlined approach that can eventually become an ongoing part of the government’s regular public health activities.

“The question is, if cases are coming down, do we fade into the background?” said one senior administration official involved with the Covid response. “In some ways, it may be out of our control.”

Any such transition could take months given the White House’s role coordinating Covid initiatives that cut across the government, and Biden aides have yet to plot out a timeline. They also stressed that Covid’s persistence means the federal response is unlikely to ever end, only evolve.

A White House official said in a statement there is no plan to wind down the White House Covid team at any point soon, dismissing it as “not a conversation.”

“While we’re in a much better place than we were in January 2021, or even a year ago — COVID is not over and our response continues to be active, comprehensive, and led out of the White House,” the official said. “That is not changing right now or soon.”

The most pressing priority of the COVID team is to make it through the fall and winter seasons that could plunge the country right back into crisis.

President Joe Biden took office in January 2021 as a Covid surge was killing more than 3,000 people a day. And last winter, just as it appeared Covid might be under control, the Omicron variant drove millions of infections and widespread labor shortages. Since then, officials said Biden’s only instruction has been to do what it takes, for however long it takes, to rein in the pandemic.

But should the U.S. escape the colder months without another major setback, four senior officials and others close to the response said there will be little justification — or funding — to remain on emergency footing for an extended period.

“The toll continues to be extremely high, and I would hate for us to accept that as the new normal,” said Richard Besser, CEO of the Robert Wood Johnson Foundation and a former acting director of the Centers for Disease Control and Prevention. “That being said, we’re in a different place with this pandemic with people resuming more of their normal activities.”

“There is no clear point where it’s exactly right to shift,” he added, “but we’re moving in that direction.”

Jha offered a glimpse at the government’s longer-term vision Tuesday, suggesting most people may soon need just one Covid vaccine a year — on par with what’s recommended to defend against the flu.

“We are at a point where, in most instances, we can prevent serious illness and death,” he said.

Biden later touted the once-a-year schedule as a “new approach” that would align annual Covid and flu vaccinations — though his health advisers cautioned that vulnerable people may still need multiple shots a year.

At the White House and inside the health department, officials planning the unwinding of the Covid public health emergency imposed in January 2020 are working under the tentative assumption the declaration will be allowed to expire in the spring or summer of 2023.

The administration is preparing to phase out the federal subsidies that guarantee free Covid vaccines and treatments as early as the beginning of 2023, in favor of transferring the burden of buying and distributing them to the private insurance market. Health officials met last week with a range of health industry and state representatives to discuss that transition, saying afterward, “we have always known that we would not be in this business forever.”

The administration is working in parallel to craft new policies safeguarding access to those tools for the uninsured, and have begun thinking through how the government’s various health agencies can take on greater responsibility for the Covid response. Those initiatives have all accelerated in the face of continued resistance from Republicans in Congress to approve the funding needed to keep the administration fully in charge of the response.

“We’ve been forced to move toward commercializing the response not dictated by where we are with the pandemic, but because of a lack of funding by Congress,” the White House official said.

The money woes have created worries in the interim as well. The government has nearly depleted its stockpile of a monoclonal antibody treatment and anticipates running out of its main treatment — the antiviral pill Paxlovid — in mid-2023.

Last week, it halted a popular program offering free at-home tests to anyone who requested them. The suspension came after internal projections showed the government on pace to run out of the tests by October, a senior official said, alarming health officials who estimated they’d need at least 800 million tests to sufficiently respond to a Covid surge on par with last winter’s Omicron wave.

The administration, which hadn’t purchased tests in months because of the funding shortage, is searching for money to divert from other programs in hopes of buying more. As the senior official put it, the goal now is to go “from completely horrendous to just inadequate” levels of preparedness.

The White House has continued pushing Congress for more than $20 billion in Covid funding — an amount officials said would allow them to execute more gradually on their planned transition and avoid potential disruptions. But there’s limited hope for a legislative breakthrough just weeks out from the midterm elections.

“The challenge is that everybody wants this to go away,” said Michael Osterholm, an epidemiologist and former Biden transition Covid-19 adviser. “There’s already an approach that we’ve done what we can — and [now] we’re done.”

Those dwindling resources have injected greater urgency into its rollout this week of updated vaccines. The shots are designed to target the virus’ dominant strains — and could also be the last ones for the foreseeable future to be distributed by the government free for everyone.

The administration has scrounged money from various parts of the health department to fund a limited promotional campaign, and cast widespread takeup of the boosters as essential to preventing a winter Covid spike.

But demand is widely expected to be low, especially at the outset — a product of public exhaustion with Covid and the lack of a new and imminent threat.

“We’ve just lost our sense of scale around the magnitude of deaths and disability caused by Covid,” said Megan Ranney, an emergency physician and academic dean of the Brown University School of Public Health. “Folks are just kind of tired.”

It’s a public sentiment that health officials acknowledge is shaping the future of the federal response, and that’s left the government with limited resources to do much more than develop the tools to fight Covid — and try to ensure they’re still available when the need arrives.

“At this point, we know another variant is coming — we just don’t know when,” a senior administration official said. “Our job is to make [the vaccine] available. And then people can do what they want.”