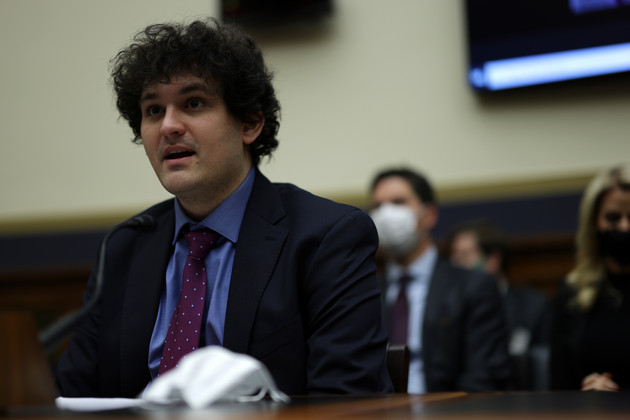 Sam Bankman-Fried's Washington campaign was bolstered by his emergence as a political megadonor. | Alex Wong/Getty Images

Crypto megadonor Sam Bankman-Fried helped bankroll Democrats’ overperformance in the midterms. But any friends he may have had in Washington won’t be there for him as his crumbling business empire threatens to torpedo the entire digital currency market.

Bankman-Fried’s Washington influence — as well as billions of dollars of his personal wealth — nearly vanished in the span of 48 hours, after it emerged that the giant crypto exchange he founded was insolvent and unable to meet customer withdrawals.

State and federal regulators are now investigating the exchange, FTX, to determine whether it may have harmed clients or broken other financial regulations. An emergency rescue from competing digital asset exchange Binance fell apart after the company dug into FTX’s financials and investigators circled.

The crisis has demolished Bankman-Fried’s public image as a go-to resource for policymakers writing rules for crypto — a reputation that was built on his willingness to write multimillion dollar checks to boost Democrats.

One Democratic congressional staffer who requested anonymity because they weren’t authorized to speak publicly compared the collapse to seeing the man behind the curtain in “The Wizard of Oz,” with Bankman-Fried’s razzle-dazzle performance for lawmakers and regulators amounting to smoke and mirrors.

“There are folks who are going to feel burned by this whole episode,” said Isaac Boltansky, director of policy research at the global financial services firm BTIG. “This is a pretty big body blow for an industry that was just starting to get its legs under it.”

The meltdown — arguably the most devastating in the history of crypto — is threatening to derail a broader industry lobbying campaign that had been gaining traction with Republicans and Democrats eager to draft new laws to accommodate digital asset startups. Bankman-Fried and his lobbyists, including former federal regulators, were at the center of the effort. It’s also wreaking financial havoc across the crypto market, creating new headaches for FTX’s competitors and other firms.

Crypto executives and lobbyists are already distancing themselves from Bankman-Fried.

“This is an absolutely stunning turnaround from somebody who was the darling of Washington policy circles,” said Blockchain Association Executive Director Kristin Smith. “It was built on a house of cards.”

FTX’s financial crunch came to light earlier this week, after a series of events pointed to instability at the company.

Crypto media outlet CoinDesk on Nov. 2 published a report indicating that Alameda Research — a trading firm that’s also owned by Bankman-Fried — had propped up its balance sheet with billions of dollars in a highly illiquid digital token that had been issued by FTX. On Sunday, Binance — the world’s largest crypto exchange and a major FTX competitor — announced that it would dump its holdings in the token in light of the revelation.

Customers raced to pull their funds from FTX, prompting the company to halt withdrawals — a move that trapped hundreds of millions of dollars’ worth of crypto on the exchange.

Bankman-Fried negotiated an emergency sale of the company to Binance and announced it Tuesday, but the deal fell apart by Wednesday afternoon.

“As a result of corporate due diligence, as well as the latest news reports regarding mishandled customer funds and alleged US agency investigations, we have decided that we will not pursue the potential acquisition of FTX.com,” Binance said in a Twitter post Wednesday. FTX declined to comment.

It all marked a complete reversal from the role Bankman-Fried played earlier this year, when his firms rescued other ailing startups during another crypto crash.

Bankman-Fried’s attempt in recent months to portray FTX as the crypto world’s source of financial stability provided the 30-year-old an opportunity to make inroads with policymakers, to whom he decried the industry’s excesses as the company lobbied to shape a flurry of crypto bills and regulations.

“Every day that we don’t get anything done on the crypto policy side, simultaneously, customers are not protected,” Bankman-Fried said in an October interview. “There is no preemptive cop on the beat. And also 95 percent of the industry is offshore because there are no clear guardrails in the United States.”

Bankman-Fried’s Washington campaign was bolstered by his emergence as a political megadonor. He contributed more than $40 million to Democratic candidates and a network of super PACs that promoted crypto and public health policies.

But even Bankman-Fried’s political aspirations proved wobbly in recent weeks. He angered progressive Democrats in October when he walked back plans to spend $1 billion on races through 2024, saying in a POLITICO interview that his pledge was a “dumb quote on my part” and that he didn’t believe additional contributions would make an impact.

Bankman-Fried is now facing intense scrutiny from regulators and lawmakers, after his firms triggered a market-wide crypto crash that’s also being felt on Wall Street.

The digital asset market’s capitalization shrunk by nearly 20 percent since Monday, with the combined value of the world’s major digital currencies sinking to about $800 billion.

Bankman-Fried lost more than 90 percent of his $16 billion fortune in a matter of days, according to the Bloomberg Billionaires Index.

Robert Baldwin — head of policy at the Association for Digital Asset Markets, an industry standards group that’s been closely aligned with FTX — said the broader meltdown could lead to congressional hearings on crypto’s potential risks to the financial system and to consumers.

“I don’t think there’s going to be as big of a seat at the table for industry,” he said.

Securities and Exchange Commission Chair Gary Gensler, who has warned that the unregulated digital asset industry is a threat to consumers, said at a conference Wednesday that “too many good folks are getting hurt.” Gensler, who has been villainized by crypto advocates, may find himself vindicated in light of the FTX debacle.

“It’s a Wild West with a lack of disclosure, a lot of leverage and a lot of interconnectedness,” Gensler said. “It’s like Jenga blocks all built up, and, as each block gets pulled out, it topples a bit.”

Other industry figures — including Circle CEO Jeremy Allaire and Coinbase CEO Brian Armstrong — have sought to calm markets by issuing statements indicating they have limited exposure to the Bahamas-based FTX and Alameda.

“We are incorporated in the US, and publicly listed in the US because we believe that transparency and trust are so important,” Armstrong said on Twitter Tuesday.

“This is what happens when instead of doing robust public interest policy, you hitch your wagon to charismatic founder types who make a lot of promises they can’t ultimately deliver on,” said Americans for Financial Reform senior policy analyst Mark Hays. “Sam may be one of the biggest and clearest example of that kind of hubristic figure, but there have been many before him and will likely be many after him.”

Declan Harty and Josh Sisco contributed to this report.