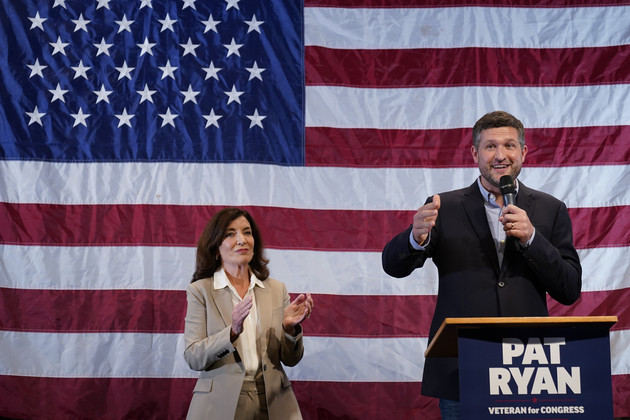 Democratic candidate Pat Ryan will serve out the remainder of the congressional term. | Mary Altaffer/AP Photo

ALBANY, N.Y. — Democrat Pat Ryan won a special election Tuesday in a swing district in New York’s Hudson Valley, a significant victory for his party in a seat which has been closely watched as the country’s best bellwether this summer.

Ryan, the Ulster County executive, led Republican Marc Molinaro with 51 percent of the vote when the Associated Press called the race shortly after midnight. The district is closely divided: President Joe Biden carried it by fewer than 2 percentage points in 2020.

The race in the battleground district, which had been represented by Democrat Antonio Delgado until he left to become New York’s lieutenant governor in May, saw both candidates focus their messaging on the issues that will dominate each party’s talking points in November.

Ryan’s television ads hammered on the need to elect a representative who would fight for abortion rights in the wake of the Supreme Court’s June decision overturning Roe v. Wade, while Molinaro, the Dutchess County executive, centered his campaign on crime and inflation.

The outcome marked the latest in a string of recent House special elections in which Democrats have outperformed recent baseline numbers in the districts.

Top Democrats quickly touted his victory as a sign there’s more to come as they look to maintain control of the House in the general elections in November.

“Upstate New Yorkers showed up to the polls and voted for a true champion who will stand up for the values we hold sacred in New York — reproductive freedom, protecting our fundamental rights, and creating opportunity for everyone,” Delgado said in a statement.

Ryan, a graduate of nearby West Point, has been executive of the increasingly-blue county in the Hudson Valley since 2019. Ryan overwhelmingly won his home county of Ulster and nearby Columbia County and stayed competitive against Molinaro in Dutchess to carry him to victory.

Ryan will serve only four months in the current district, and he and Molinaro will be on the ballot again in November — but in separate competitive districts.

Ryan handily defeated primary opponent Moses Mugulusi on Tuesday in his race for a full term in November, and he will face off against Republican Assemblyman Colin Schmitt in a seat centered on Poughkeepsie.

Molinaro, meanwhile, will run in a sweeping district across parts of the Hudson Valley and central new York against Ithaca attorney Josh Riley, who defeated businessperson Jamie Cheney in a Democratic primary on Tuesday.

“Whether it’s tonight or it’s Nov. 8, we are going to win the 19th Congressional District and give voice to people who are working too damn hard and getting too little in return,” Molinaro said Tuesday night.

The new district where he’ll face Riley in November is a little bit more Democratic-friendly than the one he ran in on Tuesday, while the district Ryan will be running in this fall was won by Biden by about 8 percentage points.