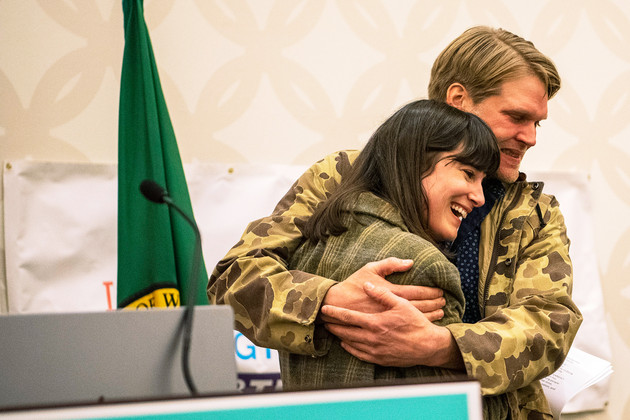 Marie Gluesenkamp Perez, an unknown before the primary, ran as a moderate, rural Democrat and small business owner. | Taylor Balkom/The Columbian via AP

Gluesenkamp Perez, an unknown before the primary, ran as a moderate, rural Democrat and small business owner. The district has been held by Republicans since 2011.

“The people in my district are looking for representation that focuses on finding common ground and delivering results, not the extreme hyperpartisanship and clickbait politics offered by my opponent,” Gluesenkamp Perez said in a statement Saturday.

Kent, meanwhile, told supporters on Twitter on Saturday night that he is not conceding, and urged voters to check the status of their mail-in ballots online. There are approximately 12,000 votes yet to to be counted in the district, but the Associated Press determined that they are not enough to change the outcome for Kent.

Gluesenkamp Perez will replace Rep. Jamie Herrera Beutler (R), whose vote to impeach the former president drew a litany of pro-Trump challengers in the state’s open primary — including Kent, who edged out Herrera Beutler. In the general election, the central question was how Herrera Beutler’s more moderate GOP supporters would vote: further right toward Kent, or slightly left for Gluesenkamp Perez, who holds moderate positions on issues like gun control.

Gluesenkamp Perez attracted some of Herrera Beutler’s supporters to her side, while Kent clinched an endorsement from former Rep. Tulsi Gabbard of Hawaii, who recently left the Democratic Party.

Gluesenkamp Perez walked a tightrope on policy in the right-leaning district, campaigning in favor of abortion rights but also promising to protect Second Amendment rights and to create more logging jobs.

Inflation and crime were top issues in the race, and both candidates argued they were better positioned to represent the geographically and politically diverse district’s economic interests in Congress. Gluesenkamp Perez said she could relate to voters’ fears about crime, reminding them that her own auto shop had been broken into multiple times this year.

Half of replanted tropical trees don