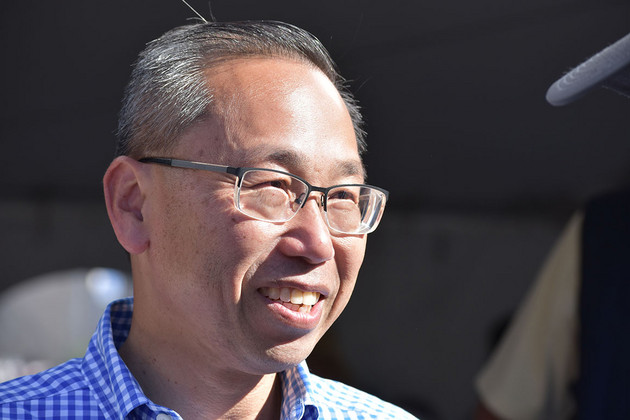 Allan Fung, a two-time gubernatorial candidate and popular former mayor of the state’s second-largest city, is capitalizing on his name recognition and the goodwill he’s engendered from nearly two decades in local government. | Lisa Kashinsky/POLITICO

PROVIDENCE, R.I. — Democrats are casting Allan Fung as a pro-Trump Republican who would help usher an “extremist” agenda back to Congress.

It’s messaging straight out of the national playbook of a party trying to keep voters focused on reproductive rights and anti-Donald Trump sentiments — and off of rising everyday costs — as they work to minimize their losses in November.

But in deep-blue Rhode Island, it’s Fung, the Republican, leading Seth Magaziner, the state treasurer, in polls in a congressional district Democrats have held for more than three decades and President Joe Biden won by nearly 14 points in 2020.

This shouldn’t be a competitive race. But Fung, a two-time gubernatorial candidate and popular former mayor of the state’s second-largest city, is capitalizing on his name recognition and the goodwill he’s engendered from nearly two decades in local government. And he’s using his status as the latest standard-bearer for moderate New England Republicanism — which many in his party believed was nearing extinction — to draw regional support and national attention.

“There’s plenty of awareness that this was going to be a close race,” Sen. Sheldon Whitehouse (D-R.I.) said in an interview. “It could go either way at this point. At the end of the day if we’re at all effective at helping people understand the difference between a mayor and a member of Congress, we make the connection with voters and we win this seat.”

Republicans see the seat being vacated by Democratic Rep. Jim Langevin as a potential pickup. Congressional Leadership Fund, a super PAC aligned with House Minority Leader Kevin McCarthy, has poured $2 million into ads promoting Fung and bashing Magaziner. McCarthy is among the stream of Republicans who’ve campaigned for Fung. Rep. Steve Scalise (R-La.), the House minority whip, and his deputy, Rep. Drew Ferguson (R-Ga.), are holding a fundraiser for Fung in Boston later this month, according to an invitation obtained by POLITICO.

Wary Democrats are redoubling their efforts with just three weeks until Election Day. Both the Speaker Nancy Pelosi-linked House Majority PAC and the Democratic Congressional Campaign Committee are beefing up their ad buys in the Providence media market this week.

And House Majority PAC is hitting the airwaves Tuesday with a new ad, shared first with POLITICO, which attempts to paint Fung as a Trump loyalist backed by Republicans who voted to overturn the 2020 election.

But Republicans say it’s hard to make those attacks stick with voters who already have preconceived notions of the pragmatic former Cranston mayor.

Rhode Islanders haven’t elected a Republican to Congress since Sen. Lincoln Chafee’s reelection in 2000. Chafee lost his seat to Whitehouse in 2006.

But Langevin’s retirement announcement in January opened the door for Republicans to recruit Fung to run in the 2nd Congressional District, which stretches from western Providence down through Cranston and Warwick and is more purple than Rhode Island’s other House seat.

Fung would be the first Asian American elected to represent Rhode Island in Congress. And he’s part of a small cadre of more centrist New England GOP congressional candidates this cycle that includes George Logan, a moderate Black state lawmaker challenging Democratic Rep. Jahana Hayes in Connecticut, and former Rep. Bruce Poliquin, who’s looking for a comeback against Democratic Rep. Jared Golden in Maine. If elected, they would join the sole New England Republican in the House or Senate: Maine Sen. Susan Collins.

Recent polls show a tight race that hasn’t moved much since the summer. Fung led Magaziner by 8 points in a Suffolk University/Boston Globe poll in early October, outside of the poll’s margin of error. He led the two-term state treasurer by 6 points in an overlapping Roger Williams University/WPRI poll, just inside the survey’s 6.2 percentage-point margin of error.

Fung led among independents and a sizable share of Democrats in both surveys. Back-to-back debates at the University of Rhode Island on Monday night and on WPRI Tuesday night could prove crucial for swaying undecided voters — which hover between 9 percent and 13 percent in polls — with early voting set to begin on Wednesday.

“The overall problem is you’re running against a guy who’s popular and who appeals to both his own party and independents,” Suffolk University polling director David Paleologos said in an interview. “So if I’m Magaziner, I look at the polling data and I say we’re pretty good on the issues except for the economy, we’re pretty good with women and we’re competitive in a lot of different areas, but how are we going to win over men and independents?”

Magaziner, the son of President Bill Clinton senior adviser Ira Magaziner who jumped into the congressional contest from the governor’s race and didn’t move into the 2nd District until August, chalks these polls up to the “big name ID disadvantage.” His campaign countered public polling by releasing an internal poll from the Mellman Group that showed the Democrat just 3 points behind Fung.

“You can go anywhere in the country and more people know who the big-city mayors are than who a state treasurer is,” Magaziner said in an interview in Rhode Island Democrats’ coordinated campaign office in Providence. But, he added, “we’ve been chipping away.”

Magaziner’s pitch focuses less on the economy — a pain point for Democrats this midterms — and more about stopping Republicans from retaking the House. Magaziner on Saturday told roughly two-dozen volunteers recently returned from canvassing that they needed to help “hold the line against extremism.” A vote for Fung, the Democrat said, would be a vote for McCarthy, for “turn[ing] back the clock on fundamental rights” and for cutting Social Security and Medicare.

Democratic insiders say it’s a playbook not unlike the one Whitehouse used to defeat the well-liked Chafee in 2006, when control of the Senate was up for grabs.

But part of the difficulty in denting Fung is that people generally consider him a nice guy regardless of their party affiliation. Democratic state committeeman Joe Paolino, a former Providence mayor and U.S. ambassador, called Fung a “nice man,” in an interview. House Majority Leader Steny Hoyer (D-Md.), told reporters last month that Fung is a “quality opponent” and “not an extremist.”

Magaziner scoffed at the notion of Fung as a moderate, citing the Republican’s opposition to raising the state’s minimum wage and to Rhode Island’s 2019 Reproductive Privacy Act that aimed to protect abortion rights. Magaziner was endorsed by Planned Parenthood Action Fund on Monday, while the Rhode Island branch of Right to Life recommends people vote for Fung.

Fung brushed those charges aside in an interview, saying he would “never vote to cut or eliminate Social Security.” He also said he supports keeping abortions legal “slightly” into the second trimester of pregnancy as well as later-term abortions if it’s to preserve a life or in cases of rape or incest.

Republicans are putting their weight behind Fung. Big GOP names from McCarthy to former New Jersey Gov. Chris Christie have campaigned with him in Rhode Island. Charlie Baker, the popular outgoing governor of Massachusetts, fundraised for Fung in Boston in September. Scalise and Ferguson will do the same later this month.

The McCarthy-backed Congressional Leadership Fund moved $1 million into the race last week, believing Republicans have a “real shot to win a seat Democrats thought they could take for granted,” spokesperson Calvin Moore said in a statement.

Magaziner out-raised Fung over the summer and entered October with more cash on hand, according to federal campaign finance reports. The state’s congressional delegation has coalesced around him. And key campaign committees are increasing their spending in the home stretch, with the House Majority PAC up to nearly $1.5 million.

“I’ve got to say, it took a little while,” Magaziner said. “But now I am pleased that national Democrats are taking my race seriously.”

Other Democrats say it’s not enough — and that it’s time to call in the cavalry.

“Whenever you see a Democrat not leading in Rhode Island, that leads to concern. I’m not going to sugarcoat it,” Bob Walsh, a former congressional candidate and retired head of National Education Association in Rhode Island, said in an interview. “But that just increases our resolve. We’re not going to be the reason that Congress flips to the Republicans.”