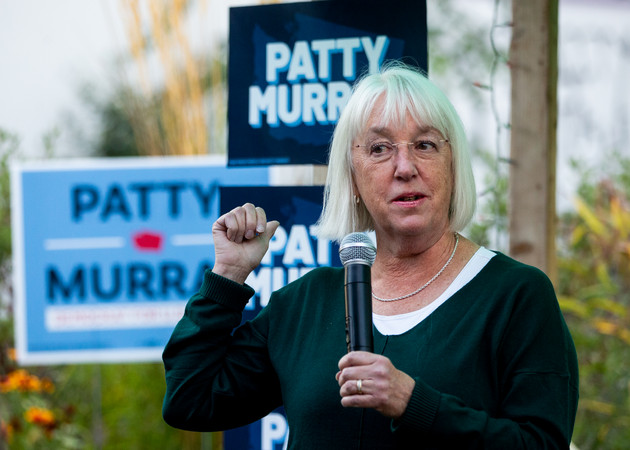 Democrats are adding millions in television spending to boost Sen. Patty Murray, a sign that the party is employing a take-no-chances approach even in solidly blue Washington state.

The 30-year veteran of the Senate is facing a challenge from Republican Tiffany Smiley, a political newcomer whose campaign has seized on quality-of-life issues, from urban crime and homelessness to inflation, to tarnish Murray. In recent public polling, Smiley has closed a sizable gap since this summer, when Murray led by 18 percentage points in an 18-candidate, all-party primary.

A Seattle Times poll released last week showed Murray slipping slightly, from 51 percent in a July survey to 49 percent now, with Smiley’s support increasing from 33 percent this summer to 41 percent now. The poll also finds that Smiley has improved with independents in the state, capturing 50 percent of their support to Murray’s 34 percent.

The national political environment currently favors Republicans in the midterms, and the fact that Democrats are spending to shore up an incumbent in a solidly blue state is not a good sign for them.

“It doesn’t surprise me that this race has tightened,” said Alex Glass, a Democratic strategist based in the state who noted voters still weren’t paying close attention to the race over the summer.

But in a liberal stronghold like Washington — a state President Joe Biden won by nearly 20 percentage points — Glass and other Democratic operatives say they think voters’ feelings about abortion rights and wanting action on climate change will ultimately outweigh dissatisfaction with the economy. Democrats just can’t slack off in the meantime, they say.

Last week, Women Vote, a super PAC affiliated with the abortion rights organization EMILY’s List, added $2.4 million to the Washington race. That’s on top of $4 million the group had already spent this year on television ads supporting Murray, according to AdImpact.

A spokesman for EMILY’s List said Women Vote does not publicly comment on its spending strategy. But in a statement, the group signaled its unwavering support for Murray, who has been a foot soldier for the organization since entering the Senate in 1993.

“With Republicans threatening a national abortion ban, we need Patty Murray more than ever,” said EMILY’s List spokesman Benjamin Ray, calling Murray “a trailblazer and a champion for women’s freedom to control their own bodies” while describing Smiley’s candidacy as a “McConnell-backed challenge.”

Murray’s campaign, meanwhile, bought another $1.5 million in ads over the last week, in addition to a smaller television spot as part of a coordinated effort with the Democratic Senatorial Campaign Committee. In the same period, Smiley has added roughly $915,000 in new television spending.

The senator’s campaign also continues to launch television ads attacking Smiley directly — as Murray has done for months — a tactic that shows the campaign is taking the challenge seriously. Murray put out her latest ad targeting Smiley on Thursday, a spot the campaign named “Don’t be fooled.”

On Tuesday, a joint fundraising appeal from Murray and the DSCC referenced an unnamed poll showing the senator up just 4 percentage points, calling the gap “too close for comfort.”

“Smiley raised millions more than my team last quarter and she’s closing the gap in the race,” the email from Murray reads.

Democrats continue to hold a spending advantage in the state through the Nov. 8 election, having run or reserved $18.5 million in advertisements, compared with Republicans’ $11.8 million, according to AdImpact.

But Smiley has shown more momentum in fundraising, likely the result of being an up-and-comer in Republican politics in a state that grass-roots Democratic donors haven’t considered to be particularly competitive.

In this year’s third fundraising quarter, Smiley significantly outraised Murray, $5.7 million to $3.4 million, after matching the incumbent senator during the previous two quarters.

The state hasn’t sent a member of the GOP to the Senate in decades. Washington’s last Republican senator, Slade Gorton, was elected in 1988 and left office in January 2001.

A new poll from Citizens United, a conservative advocacy group run by David Bossie, a former Donald Trump deputy campaign manager, found Murray with a 6-point lead over Smiley. In the same survey, conducted last week by GOP pollster Kellyanne Conway, 39 percent of voters said Murray deserved reelection, while 51 percent said it was time to give someone new a chance.

“Washington state is not a purple state. It is not a marginal state. It is a deep-blue state. To be having this conversation is a bad omen for Democrats,” he said.

But while some GOP money has flowed to Washington and Colorado Senate races this year — including $3.4 million to a pro-Smiley super PAC — Republicans have been unable to prioritize the states as serious pickup opportunities, instead working to strengthen struggling campaigns in more GOP-friendly states. Republican spending groups have poured tens of millions of dollars into individual states like Ohio, North Carolina, Nevada, Georgia and Arizona in a fight to retake control of the evenly divided Senate.

Top Democrats shrug off the suggestion that Murray is in any real trouble this year, but suggest it is prudent to take the race seriously.

A national Democratic Senate campaign aide described how no one in the party wants to “wake up in a world where Patty Murray isn’t reelected” — or one where the party hasn’t “done everything possible to defend Sen. Murray from Republican attacks.”

The National Republican Senatorial Committee has spent $750,000 in Washington, a state that was never among the GOP’s top targets this year. Chris Hartline, a spokesman for the committee, did not directly answer a question about whether the NRSC would spend additional money in Washington.

In Topsy-Turvy Market Logic, Positive US GDP Could Be Negative for Crypto