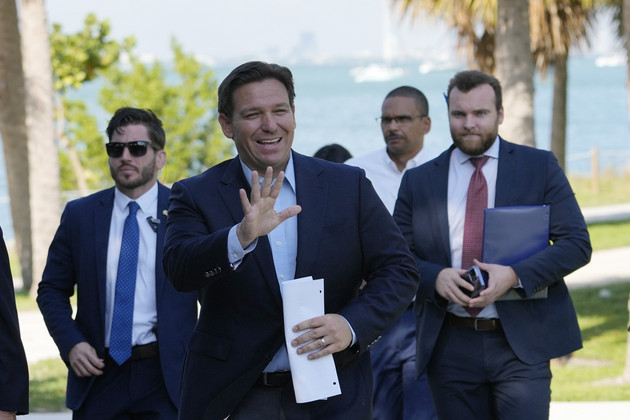 Along with his surgeon general, Florida Gov. Ron DeSantis has rejected vaccines for young children even after the FDA gave approval for the vaccines in kids under 5. | Lynne Sladky/AP Photo

TALLAHASSEE, Fla. — Gov. Ron DeSantis on Tuesday asked the Florida Supreme Court to empanel a grand jury to investigate “wrongdoing” linked to the Covid-19 vaccines, including spreading false and misleading claims about the efficacy of the doses.

Most of the medical community, including the Centers for Disease Control and Prevention, the FDA and Johns Hopkins, have emphasized that the Covid vaccine is safe and effective in preventing the virus and protecting against serious symptoms.

But DeSantis said during a live-streamed round table discussion with Florida Surgeon General Joseph Ladapo that it’s against Florida law to mislead the public, especially when it comes to drug safety. He sought to undermine the efficacy of the Covid vaccine and claimed that vaccine manufacturers such as Moderna have made a fortune on Covid-19 mandates.

In a petition to the state Supreme Court asking for the grand jury, the DeSantis administration said that the “pharmaceutical industry has a notorious history of misleading the public for financial gain” and the grand jury will probe “the development, promotion, and distribution of vaccines purported to prevent COVID-19 infection, symptoms, and transmission.”

DeSantis’ announcement was the latest in an ongoing war between his administration and the Biden administration — and the broader medical community — over the pandemic. DeSantis has built a national reputation fighting against Covid-related mandates such as vaccine requirements or schools ordering students to wear masks. The Biden administration did not immediately respond to a request for comment.

Along with his surgeon general, DeSantis has rejected vaccines for young children even after the FDA gave approval for the vaccines in kids under 5. Florida was the only state in the nation to not re-order vaccines for children ahead of the FDA’s fast-tracked approval.

In response to DeSantis, Sharon J. Castillo, a Pfizer spokesperson, wrote in an email that Pfizer’s vaccine has been approved by regulatory agencies across the world.

“These authorizations are based on robust and independent evaluation of the scientific data on quality, safety and efficacy, including our landmark phase 3 clinical trial,” Castillo wrote. “Data from real world studies complement the clinical trial data and provide additional evidence that the vaccine provides effective protection against severe disease.”

Officials with Moderna did not immediately respond to a request for comment.

During Tuesday’s roundtable, Ladapo also announced the creation of the Public Health Integrity Committee, which will offer guidance to the public on treatment options for Covid. The committee will also critique guidance released by the U.S. Centers for Disease Control and Prevention.

“People feel like they’re beholden to the CDC,” Ladapo said during the round table discussion. “We will be issuing recommendations that make sense and are scientifically valid.”

Ladapo also announced plans to launch a study on people who died of cardiovascular problems after they received the vaccine. Ladapo had released a study looking at heart issues and the vaccine in October that was panned by many in the medical community for lacking evidence and analysis. This study will include coordination with the state’s 25 regional medical examiner’s offices and the University of Florida, and it will determine whether people have died from heart complications created by the vaccine.

DeSantis and Ladapo recently began focusing on the mRNA vaccines manufactured by Pfizer and Moderna. Both products went through the approval process set by federal health care regulators, and Ladapo has warned that placing such a rush on science is dangerous. He was one of more than 20 medical experts who signed a petition in June 2021 asking the CDC not to give final authorization to the two vaccines, which the federal agency rejected.

Ladapo said during the roundtable that patients are now coming forward with stories of serious complications related to one of the two mRNA vaccines. Retired Pensacola police officer Steve Ordonia told the group that he began experiencing serious joint and muscle pain shortly after he had a booster shot earlier this year. He was taken to the hospital several times before he began to blame the vaccine.

“I knew right there it was the shot,” Ordonia said, adding he has contemplated suicide. “We’ve got to change this hospital protocol.”

The round table was also joined by Harvard epidemiologist Martin Kulldorff and Stanford University medical professor Jay Bhattacharya. Kulldorff and Bhattacharya authored the Great Barrington Declaration, which called for the elimination of most Covid restrictions and the adoption of herd immunity. Ladapo has also picked them to serve on the Public Health Integrity Committee along with five other experts also chosen by him.

This isn’t the first time DeSantis called for a grand jury to investigate issues in Florida. Over the summer, the governor called on the state high court to empanel a statewide grand jury to investigate illegal immigration. The group released a report earlier this month calling on the Legislature to create new laws against harboring illegal immigrants.

State legislatures are coming back. These are the lawmakers to follow.