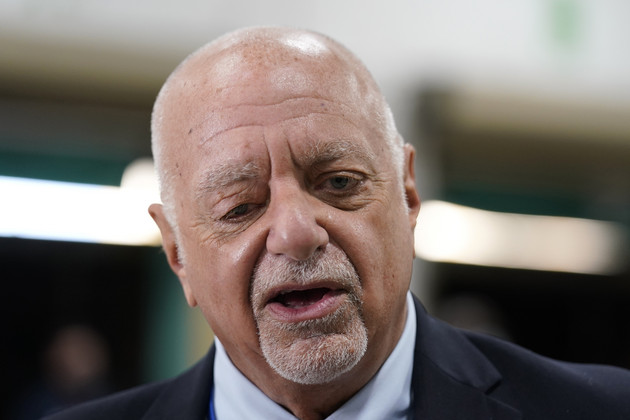 Pete Antonacci, who runs Florida’s elections investigation office, sent a letter on Aug. 18 to the state’s elections supervisors saying they did nothing wrong when individuals convicted of murder and sex offenses voted in the 2020 election cycle. | Lynne Sladky/AP Photo

TALLAHASSEE, Fla. — Florida Gov. Ron DeSantis’ office last week tried to blame local election supervisors for mistakes that could have allowed 20 people convicted of felonies to illegally vote. But the state’s election investigations chief previously absolved those local officials of any wrongdoing, according to state documents.

Pete Antonacci, who runs DeSantis’ elections investigation office, sent a letter on Aug. 18 to the state’s elections supervisors saying they did nothing wrong when individuals convicted of murder and sex offenses voted in the 2020 election cycle. Those defendants, who were ineligible to vote, were part of a press conference DeSantis used to highlight voter fraud.

“Through no fault of your own, records demonstrate that the convicted felons listed in the attached Exhibit A were registered to vote and voted in your county during the 2020 general election,” Antonacci wrote in the letter.

Antonacci sent the letters to local supervisors, asking them to preserve voting records of the defendants as part of his office’s ongoing investigation.

DeSantis held a high profile press conference on Aug. 18, the same day the letter was sent, to announce that his newly formed Office of Election Crimes Security had found 20 people convicted of felonies who illegally voted in Hillsborough, Palm Beach, Miami-Dade, Broward and Orange counties. The Florida Department of Law Enforcement arrested the suspects and charged them with third-degree felonies related to voting violations.

The Republican-led state Legislature created the Office of Election Crimes Security during the 2022 legislative session at DeSantis’ urging. The governor appointed Antonacci.

POLITICO and other outlets have since reported that elections officials at the state and local levels did not flag the registration applications and provided the defendants voting cards. Some of the accused told authorities they thought they could legally vote even though they were not actually eligible to do so due to the severity of their convictions.

DeSantis’ office had previously said that local election supervisors are responsible for ensuring that people who apply to vote are eligible. The administration declined to comment on the state’s role in verifying an applicant’s eligibility.

Though Antonacci had told local elections officials they did nothing wrong, the governor’s communications office pinned blame on them Friday evening in a statement and in a series of tweets defending the administration’s performance.

“Supervisors should not encourage people to commit voter fraud, and you’ll have to check with the supervisors to verify the claims you’re referencing,” Taryn Fenske, the governor’s communications director, said in an email. “If supervisors are telling convicted murderers they can vote, they should be held accountable.”

Fenske did not return requests seeking comment Monday when asked about Antonacci’s letter.

She cited a Florida law that indicates local supervisors have a role in checking that applicants have “been convicted of a felony for which his or her voting rights have not been restored.” But a Florida Department of State rule also outlines the administration’s responsibility in the process, including identifying “voters … who are potentially ineligible based on a felony convocation without civil rights restored.” And once identified, that list “shall be provided to the Supervisors of Elections.”

Leon County Supervisor of Elections Mark Earley, who is president of an association that represents all 67 Florida election supervisors, says citing that statute is misleading because if someone checks a box that indicates they are not a felon, that’s as far as local elections officials are allowed to investigate. Responsibility for further review rests with state elections officials.

“That statute is talking about this and only this: If on the form they check the box that they are not a convicted felon, that is our vetting,” he said. “That’s it in total.”

Several local election supervisors had also previously pointed out that the state has a clear role in verifying voter eligibility, which includes using state databases to verify eligibility that local election officials don’t have access to.

“The state uses a number of databases to confirm a person’s identity including Florida Highway Safety and Motor Vehicles, and Florida Department of Health Bureau of Vital Statistics, among others,” Suzy Trutie, the deputy supervisor of elections in Miami-Dade County, wrote in an email. “After the verification process has been completed, the State notified the County that the person’s eligibility has been confirmed. Finally, the county issues a voter registration card to the elector.”

Gerri Kramer, a spokesperson for the Hillsborough County Supervisor of Elections, said they remove felons from the voter rolls when identified by the Department of State, which administers state elections.

“The Department of State Division of Elections provides our office with information on registered voters with felony convictions whose rights have not been restored, so that we can begin procedures for removal,” she said.

Five people arrested as part of DeSantis’ crackdown registered to vote ahead of the 2020 election in Hillsborough County. County records show there was no notification to the state until January and February of this year.

Alison Novoa, a spokesperson for the Palm Beach County Supervisor of Elections, said “the state notifies our office when a prospective or registered voter is convicted of a felony or otherwise ineligible. Once the state notifies us, we begin the removal process as outlined in Florida Statute.”

In 2020, testimony in a lawsuit challenging provisions of Amendment 4, a voter-approved measure that set up a system where felons could regain their voting rights, Florida Division of Elections Director Maria Matthews also outlined the state’s extensive role in verifying if felons are eligible to vote under the new constitutional provision.

“Once it’s all compiled and we determine that it’s valid, you know, that begins with the stage of an examiner, then it’s reviewed,” Matthews said during the 2020 hearing when asked about the state’s role in determining felon eligibility. “If there’s any question about the file, that there’s still a disagreement between the examiner and the reviewer about the validity or invalidity of a file, it gets bumped to the supervisor.”

“And if they can’t resolve it, it gets bumped up to me to look at,” she added. “And if it’s a matter that triggers on legal or something, then we may get them involved.”