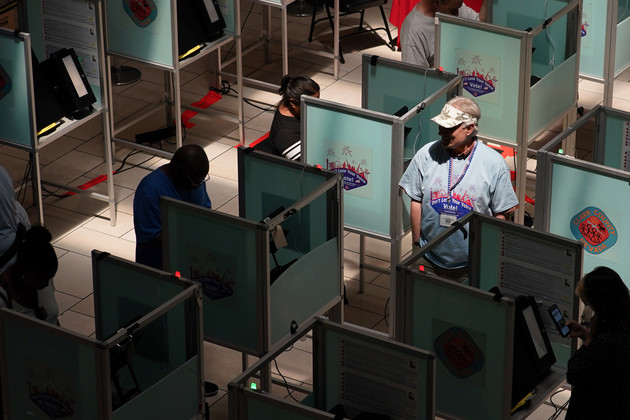 An election worker walks through voting booths to help as people vote at a polling place June 14, 2022, in Las Vegas. | John Locher/AP Photo

The Justice Department is expanding in-person monitoring of polling places for Tuesday’s midterms to areas in nearly half of U.S. states, DOJ officials said Monday.

Federal monitors looking for potential civil rights violations and voter intimidation will fan out to 64 jurisdictions in 24 states, a marked increase from the presidential election two years ago when DOJ sent monitors to 44 jurisdictions in 18 states.

Alaska, Arkansas, Missouri, Nevada, New York, Rhode Island and Utah didn’t make the Justice Department’s list in 2020, but are on it this year. Chicago and Cook County, Ill. were monitored by the feds two years ago, but no locations in Illinois are on this year’s roster.

The Justice Department appears to be incrementally stepping up its attention this year in states that have seen particular tension around ballot drop boxes.

In Arizona, where incidents of armed men stationed near ballot boxes led to a restraining order against such activities by some groups, the Justice Department is expanding election-day scrutiny to five counties from three two years ago. Among the new additions is Pima County, the state’s second most populous.

A Justice Department official who asked not to be named said jurisdictions can wind up on the monitoring list for various reasons.

“The decision on when to send election monitors is based upon the facts and circumstances on the ground with respect to a particular jurisdiction in a particular election. For example, in some places, it may be primarily monitoring for language accessibility under the” Voting Rights Act, the official said. “In other places, it may be primarily monitoring for disability accessibility….In still other places, it may include questions about possible discrimination or intimidation.”

Regular federal monitoring of elections has taken place since the passage of the Voting Rights Act in 1965. Monitors are drawn from Justice’s Civil Rights Division and local U.S. Attorney’s offices, supplemented by employees from other federal agencies.