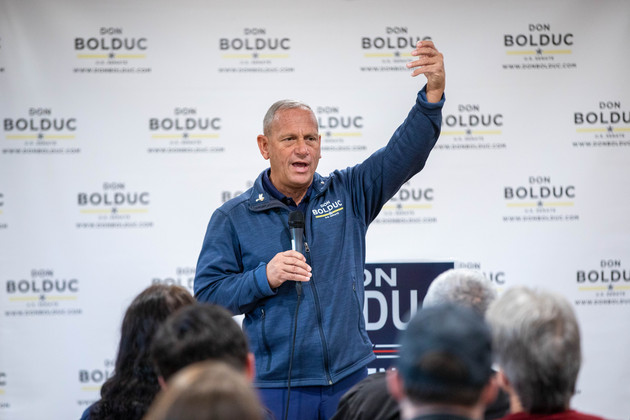 NORTH CONWAY, N.H. — The anti-establishment candidate who was supposed to end Republicans’ chances of flipping a New Hampshire Senate seat is still hanging on, thanks to Senate Minority Leader Mitch McConnell’s cash.

And while he has since reversed his position on election fraud and softened his rhetoric on abortion, Bolduc is sticking to his guns on McConnell. If Republicans capture a majority in the 50-50 Senate, Bolduc said he is still a no on supporting the Kentucky Republican as leader. That’s a question that has dogged other GOP candidates this cycle; in the primaries, they sought Donald Trump’s support, but during the general election, they’ve needed money from McConnell’s super PAC and have shied away from the topic.

“I have said no to that question, and I’m not backing off,” Bolduc said in an interview with POLITICO, when asked whether he would now agree to support McConnell as leader.

Despite his feelings about the minority leader, Bolduc remains willing to take McConnell’s money. Senate Leadership Fund, the super PAC affiliated with the Republican leader, is on track to spend $23 million on this year’s New Hampshire race. That’s a critical boost to Bolduc, who as the outsider candidate has failed to raise significant funds on his own, spending just $500,000 so far on television advertisements.

“I’m very appreciative of Senator McConnell’s support, but that’s his job,” Bolduc said. “So to me, that’s not anything that we should all be marveled about. We should expect his support and he should do everything within his power to help us win.”

Bolduc said he had not thought about who he would like to see as leader instead. When pressed, he said he had “people in mind, but I’m keeping it to myself.”

Bolduc’s continued resistance toward McConnell illustrates the enduring divide within a Republican Party that has largely aligned itself with Trump, but remains reliant on traditional establishment funding sources, chiefly the McConnell-aligned Senate Leadership Fund. It also foreshadows the difficulty Senate Republicans could face ironing out their agenda, should they recapture a majority.

While the GOP entered the midterm election cycle riding a wave of anti-Biden momentum, Biden’s approval ratings remain low. But the GOP has nonetheless found itself in harder-than-expected races in states like New Hampshire, with incumbent Democratic senators polling ahead of the president. The GOP now appears poised to secure at best a minuscule majority, rather than usher in a massive red wave and comfortable margins in the chamber.

But Bolduc’s position on leadership in Washington is unlikely to hurt him with voters, as McConnell remains unpopular in both parties. Incumbent Democratic Sen. Maggie Hassan, whom Bolduc is challenging this fall, has sought to tie Bolduc to McConnell, noting that the leader has floated a national abortion ban and suggested Bolduc would support it.

Bolduc, who ran as a “pro-life” candidate in the primary and said he wouldn’t vote otherwise, in the general election has emphasized that he would not support a federal abortion ban and believes the law should be set at the state level.

Even though public polling shows Bolduc roughly 7 points behind Hassan, Senate Leadership Fund — the top spender in the race — has chosen to keep its $23 million investment in place. It’s a sign that the group, which tends to make its spending decisions based on data, sees a GOP win here as possible in the current economic and political environment. The super PAC has kept its funds in New Hampshire even as they’ve pulled money from Arizona, another top battleground where other Republican groups have rushed in to fill SLF’s gap.

“I know what the Republicans think about this race because of the amount of money Mitch McConnell is spending on this seat,” Hassan said.

The Democrat expressed optimism that anger over Republican plans to curb access to abortion would motivate her party: “When I talk to voters, there’s a lot of concern about rising costs … but I was just talking to a group about reproductive health. People were saying to me, ‘I might vote differently this year, but bodily autonomy is the No. 1 thing because everything else depends on it.’”

Hassan has sought to highlight areas where she has disagreed with Biden, noting Tuesday that she urged the White House to release more oil from its reserves to help relieve the pain consumers are feeling at the gas pump.

But in a debate Tuesday morning, the first between Hassan and Bolduc, the senator defended Biden’s mental acuity and ability to hold the office of president. Asked in an interview later if it would be helpful for Biden to campaign with her, Hassan smiled.

“The president is always welcome in New Hampshire,” she said.

Without any significant advertising budget of his own, Bolduc has relentlessly traveled the state holding low-cost grassroots events and town halls with voters.

On Monday, supporters spilled out of an Italian restaurant midday in his hometown of Laconia, packing onto a patio in the rain to listen through an open door to the remarks inside. He was accompanied by Tulsi Gabbard, the former Hawaii congresswoman and 2020 Democratic presidential candidate who has since taken to bashing her old party.

Wearing his high school letterman jacket in the photo line afterward, Bolduc hugged and backslapped old classmates who called him “Donnie,” family friends who praised his late father, and some new supporters who said they had driven hours for the event. That night, the campaign ran out of chairs at the North Conway Community Center, where Bolduc and Gabbard held a rally.

After running to the right of most candidates in the Republican primary this year, casting himself as the Trumpiest of the field, Bolduc has set out to appeal to a wider swath of voters. At the start of campaign events, he says he expects there are Republicans, independents and Democrats in the room. During his stops with Gabbard, the duo emphasized the need for opposing sides to work together to achieve common-sense solutions.

Bolduc met Gabbard in New Hampshire during the 2020 election cycle, when he was running in the Republican Senate primary — a race he lost — and as she was seeking the Democratic nomination for president. Both were at an American Legion event in the town of Meredith, where Bolduc said he was “very impressed” with the then-Democrat.

At a steel company in Greenland on Tuesday, Bolduc said his first phone call if he is elected to the Senate would be to Sen. Jeanne Shaheen, the state’s Democratic senior senator.

“I think you and I can come together to do three very important things,” Bolduc said to the steelworkers gathered in a small cafeteria room, enacting the phone call he would make to Shaheen. He said he would ask for her help “influencing the current Democrat administration to reverse” its policies that have caused inflation; he would suggest they make a concerted effort to be an example of how bipartisan senators from a state could work together; and he would ask for her help to secure the border.

Ed Butler, chair of the Carroll County Democratic Party, where both Bolduc and Hassan campaigned early this week and participated in the first debate, described the county as “still purple — we’re not blue. We’re not red.” Biden won the county by less than 2 percentage points in 2020, though Shaheen won by double digits.

“He’s definitely putting up a fight,” Butler said of Bolduc. “And it’s a challenge, and Maggie will rise to meet it.”

As for whether Bolduc would now welcome support from Trump, who declined to endorse anyone in the primary, he said he would. But he said voters in New Hampshire wouldn’t have wanted anyone from the outside “meddling in their primary,” something Trump did in other competitive Senate races this year.

“I think what our election did was show that with less than $500,000, by working hard over two years and getting out to every town and city, that you can win against power and money,” Bolduc said. “And my hat’s off to Granite Staters for accomplishing that. It’s pretty significant.”

Between now and Election Day, Senate Leadership Fund is set to run more than $8 million worth of ads on Bolduc’s behalf, more than any other advertiser in the race.