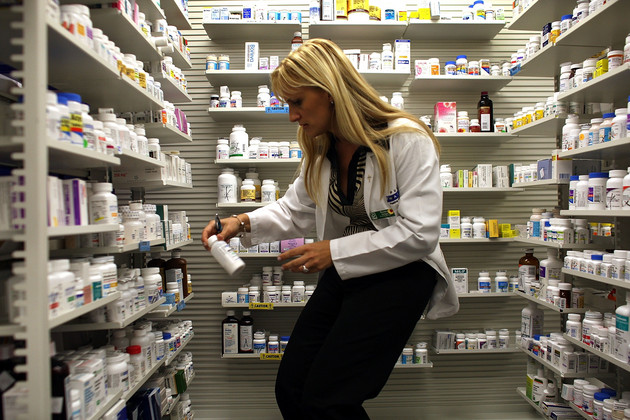 The drug industry spent millions of dollars over the last two years to oppose iterations of the drug pricing plan. | Joe Raedle/Getty Images

Drugmakers are waking up to the reality that Democrats’ revived budget reconciliation bill has a shot at enactment, and are waging an intense lobbying campaign on Capitol Hill and over the airwaves in a last-minute attempt to bring it down.

The bill would allow Medicare for the first time to negotiate prices of some of the most costly drugs used by American seniors, threatening billions in revenue, and punish drug companies if they raise prices faster than the rate of inflation. For the pharmaceutical players impacted most by the bill, it’s the equivalent of a five alarm fire.

“The ground is shifting. It’s starting to sink in for them, what the bill does,” one industry lobbyist told POLITICO about the sentiment among pharmaceutical executives at a recent gathering. “The CEOs who have significant concerns are very engaged.”

That gathering, an annual planning meeting for the industry’s most prominent trade group, took place at the Conrad Washington hotel last week — hosting leaders of some of the largest drugmakers in the country.

With the clock ticking for Democrats to pass the reconciliation bill, the routine meeting of the Pharmaceutical Research and Manufacturers of America, or PhRMA, board members turned into an opportunity to reach out to allies in the House and Senate.

Several lobbyists representing pharmaceutical interests spoke to POLITICO about the mood on K Street about the lobbying effort, and most were granted anonymity to speak freely about their work.

The stakes are high for Democrats to follow through on key promises to rein in the cost of health care before the midterm elections in November, and represent a major victory in the party’s 20-year goal of allowing Medicare to negotiate the price of medicine.

Despite the industry’s legendary clout, momentum appears to be building for a deal, punctuated Wednesday evening with the announcement of an agreement between Senate Majority Leader Chuck Schumer and the Senate Democrat most skeptical of the reconciliation bill, Joe Manchin of West Virginia, that includes once-scrapped tax and climate measures.

Democrats are desperate to revive anything of the ambitious agenda President Joe Biden set out early in his presidency. The drug pricing provisions also save the government $288 billion over the next decade, which can be used to fund other priorities. By using the budget reconciliation process, Democrats can pass the drug pricing plan with only 50 Senate votes. They have a Sept. 30 deadline to act, and senators are set to leave for August recess after next week.

‘We owe it to our members’

The drug industry spent millions of dollars over the last two years to oppose iterations of the drug pricing plan and now will use “every tool [it] has to push back” on the reconciliation bill, Brian Newell, a spokesperson for PhRMA, said in an emailed statement.

PhRMA is “continuing our aggressive engagement with the Hill,” he said, “to remind lawmakers about the significant flaws in this bill.”

This week, it’s the Biotechnology Innovation Organization’s turn to head to Capitol Hill, as executives of the industry group’s member companies are flying in for their own board meeting.

For BIO’s small and mid-sized member companies, “policy changes can mean sink or swim for your company real fast, and that gets kind of a little bit lost for a lot of Hill staffers, who are maybe only familiar with larger companies,” said Nick Shipley, BIO’s chief advocacy officer.

The group will continue to urge lawmakers to vote against the bill as long as Medicare negotiation is included. However, part of BIO’s advocacy strategy includes also pushing for policies to blunt the damage.

“It doesn’t mean you withdraw opposition, it doesn’t mean you lay down and just let it go,” Shipley said. “But if we have an opportunity to seek a real improvement in the bill, we will. That’s just something we owe it to our members to do.”

One of the changes sought by the group includes pushing for a repeal of a provision from the Republicans’ 2017 tax law that forces companies to amortize their research and development spending over several years, rather than claiming it within one year. The provision was in previous versions of the reconciliation bill, and has broad support.

Former Rep. Ron Klink (D-Penn.), now a lobbyist at Nelson Mullins who counts PhRMA as a client, jokingly told POLITICO that he pushes back on the reconciliation bill at any opportunity — including ribbing his former House colleagues about their drug pricing proposals at the Democratic Club whenever he’s in town.

“Here’s the industry that helped us out of the plague and got America back to work again, and you’re crapping all over them,” he said with a laugh, recounting his conversations at the private club near Capitol Hill. “And of course, they don’t take that well, but we’re good friends and they put up with it.”

Although Klink believes that the drug pricing plan is both bad for patients and the pharmaceutical industry — and could lead to companies moving operations overseas — he said he understands why Democrats feel the need to pass it.

“I’ve been in those rooms when it comes down to it,” he said. “And they’re sitting there saying, ‘Look, we can either hang together, we can hang separately. And if we don’t pass something, we’re going to get our rear ends kicked in November.’”

The industry has combined its shoe-leather lobbying with advertising campaigns meant to drive the issue home for lawmakers.

PhRMA and the National Association of Manufacturers, which counts drug companies among its members, are rolling out television and digital ads that amplify a longstanding argument: the measure would slow innovation and the development of new cures. But the ads have so far refrained from calling out individual members.

‘Risky to wait until September’

Biden’s reconciliation bill was once a multitrillion behemoth that proposed to raise taxes on the wealthy to provide free community college and child care and fight climate change. It shrunk in the face of opposition from Manchin and another Senate Democrat, Kyrsten Sinema of Arizona.

The fate of the measure appeared uncertain after Manchin went on Fox News in December and said he couldn’t vote for it. But the bill started to gain momentum earlier this month when Schumer resurfaced the drug pricing provisions — the part of the bill with the least objections — and has only continued to pick up steam, culminating in Wednesday’s deal between Schumer and Manchin.

The plan would raise $739 billion largely by authorizing Medicare to negotiate the prices of the most costly drugs, raising corporate taxes and boosting tax enforcement. The funds would go toward extending Affordable Care Act subsidies for three years, capping seniors’ out-of-pocket drug costs under Medicare Part D at $2,000 a year, combating climate change and reducing the deficit.

And even as drugmakers have increased their lobbying, so have insurers and advocates for patients. For example, the Blue Cross Blue Shield Association and AARP are pressing lawmakers to pass the bill, each running ad campaigns for extending the enhanced Affordable Care Act subsidies and for the drug negotiation language, respectively.

Groups, including the Alliance of Community Health Plans, are pushing to extend the subsidies for longer than a few years — ideally making them permanent — but the price tag is likely too costly for Democrats. The initial plan extended the enhanced subsidies for two years, while the new deal announced on Wednesday increased it to three.

Bill Sweeney, AARP’s senior vice president of government affairs, said the group has talked with lawmakers about both issues — and activated its grassroots network of members to write to their members of Congress.

“This is the culmination of more than three years of really intensive work. We are going to do everything we can to get this over the finish line,” Sweeney said. “I hope that people stay focused on how important, transformative and historic this is.”

The seniors’ group has also run ads in West Virginia to boost Manchin and counter ones by a drug industry ally, the 60 Plus Association, that say he “cracked under pressure” by agreeing to support the reconciliation bill.

“Everybody knows Joe Manchin cares about West Virginians, and he knows too many of us are struggling to pay for our medicine while big pharma rakes in record profits,” the AARP ad declares. “That’s why he supports letting Medicare negotiate lower drug prices.”

There’s also pressure for a quick vote. “Who knows what other forces will be in play? Who knows who might be sick from Covid and unable to vote?” said David Mitchell, the founder of Patients for Affordable Drugs, which is pushing for drug pricing reforms.

“We don’t have to work hard in the Senate, in the sense that we’re trying to win votes,” he said about the group’s advocacy. “We’re trying to make sure that we are doing everything in our power to back them up, to provide support.”

Democrats’ extremely narrow majorities in the House and Senate, their longstanding struggles to reach agreement on reconciliation, and the drug industry’s history of lobbying success, mean any forecast for the legislation remains murky. But drugmakers are worried.

“You have to understand the dynamic and the context, but you’ve got to continue to make the case, state your concerns, have the conversations,” said one industry lobbyist. “Because you just never know.”