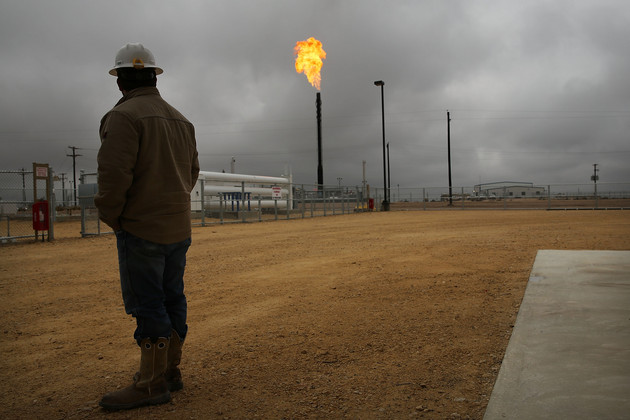 The oil and gas industry has identified provisions that may make the climate medicine go down a little easier. | Spencer Platt/Getty Images

The oil and gas industry doesn’t hate the climate bill.

The industry as a whole isn’t yet embracing the $700 billion-plus reconciliation deal, which would penalize some forms of fossil fuel pollution while making one of the largest investments in clean energy in U.S. history. But the legislation also contains what some called “Easter eggs” that would benefit oil and gas companies, including access to new swaths of federal waters in Alaska and the Gulf of Mexico.

“There are some things in there that are helpful to our business,” Rich Walsh, senior vice president and general counsel at Valero, one of the country’s largest fuel refiners, said during an earnings call Thursday with investors.

Frank Maisano, a partner at the at law firm Bracewell, said the compromise deal offers wins for both the fossil fuel and green energy industries.

“There are a lot of pieces in there that are going to be valuable to different sectors,” said Maisano, whose firm works with companies in both fields.

Maisano added that Sen. Joe Manchin (D-W.Va.), who reached the deal with Senate Majority Leader Chuck Schumer, “has been clear on where he stands — to have some mix of benefits and not lean too heavily on renewables only. That’s what he’s gotten here.”

The bill, H.R. 5376 (117th), would spend an estimated $370 billion in an attempt to slash carbon emissions across the U.S. economy by the end of the decade, by an estimated 40 percent from 2005 levels. But it includes proposals to ease federal rules that the West Virginia senator has said are constricting fossil fuel production and slowing needed upgrades to the power grid.

The compromise has infuriated some progressive environmental activists. One such group, the climate organization 350.org, called the bill “a sham” because of the fossil fuel provisions and accused the Biden administration of “engaging in a bait and switch tactic on climate legislation.”

Still, other environmental groups have said they can live with the trade-offs. And the oil and gas industry has identified provisions that may make the climate medicine go down a little easier.

Walsh, at Valero, pointed to a portion of the bill that would allocate $500 million to expand biofuel infrastructure such as storage tanks and blending facilities.

The bill would also require the Interior Department to offer at least 2 million acres a year for onshore oil and gas lease sales. Unless it holds those lease sales, the bill says, the department could not offer rights of way for solar and wind power projects.

Those leasing provisions alone would offer a win for oil and gas companies that are feuding with the Biden administration over Interior’s slow pace of fossil fuel lease sales, one lobbyist for the industry said. Meanwhile, the bill’s proposal to charge a fee of up to $1,500 a ton for the petroleum industry’s emissions of methane, a potent greenhouse gas, would be less of an issue for large oil companies already working on reducing them, industry analysts said.

“If you look at the pros and cons, the pros generally outweigh the cons,” the lobbyist said, speaking on condition of anonymity because he wasn’t authorized to speak to the news media. “The Easter eggs that Manchin forced into the bill on leasing, they’re a big deal. If you squint hard enough, you can see this being a bipartisan compromise.”

The bill would also make it easier for businesses to use a tax credit for deploying technology that captures and stores planet-warming carbon emissions, which has become big business for companies like Exxon Mobil and Chevron. The technology, which Manchin has championed as a way to stave off climate change but environmental groups and other critics say is not ready for prime time, aims to strip the carbon emissions from industrial smokestacks and bury them.

“If enacted … this package would provide the most transformative and far-reaching policy support in the world for the economy-wide deployment of carbon management technologies,” Madelyn Morrison, spokesperson for the advocacy group Carbon Capture Coalition, said in a prepared statement.

Oil company BP said the deal offers a lot to like for oil companies that are extending their reach into renewables, carbon capture and other forms of alternative energy.

“We applaud Senate lawmakers for making progress toward a historic climate deal,” BP spokesperson Josh Hicks said in an email. “BP has actively advocated for Congress to pass strong climate legislation, including the full suite of clean-energy and low-carbon tax credits the U.S. House passed in 2021. We will continue engaging constructively with policymakers to advance these measures as we aim to become a net zero company by 2050 or sooner.”

Still, not everyone in the industry was willing to call the bill a win. The American Petroleum Institute, the trade group representing the largest oil producers in the country, was more measured in its initial take.

“While there are some improved provisions in the spending package released last night, we oppose policies that increase taxes and discourage investment in America’s oil and natural gas,” said Amanda Eversole, API’s executive vice president and chief advocacy officer, in a statement.