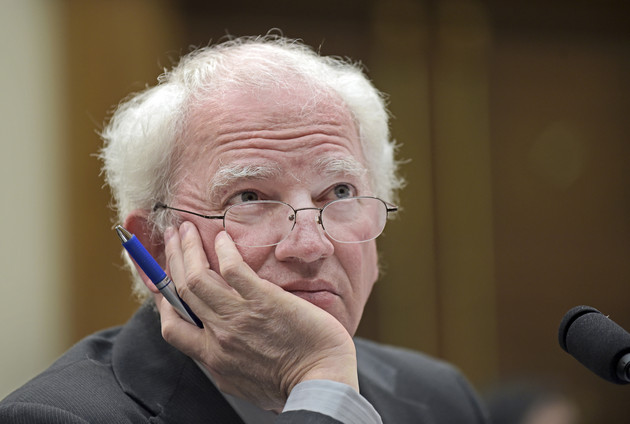 John Eastman is the latest member of former President Donald Trump’s inner circle in the chaotic aftermath of the 2020 election to face questions from the Fulton County District Attorney. | Susan Walsh/AP Photo

Attorney John Eastman, an architect of former President Donald Trump’s bid to subvert the 2020 election and remain in office, appeared Wednesday before the Atlanta-area grand jury investigating that effort, his lawyers indicated.

Eastman’s counsel, Charles Burnham and Harvey Silvergate, indicated in a statement that Eastman pleaded the Fifth and asserted attorney-client privilege “where appropriate.”

“Out of respect for grand jury secrecy we will not disclose the substance of the questions or testimony,” the lawyers said.

Eastman is the latest member of Trump’s inner circle in the chaotic aftermath of the 2020 election to face questions from Fulton County District Attorney Fani Willis for his role to overturn the election results in Georgia. Eastman, along with other Trump-aligned attorneys, pushed state legislatures to appoint pro-Trump presidential electors in a handful of states where Joe Biden was the certified winner, creating a conflict that they had hoped then-Vice President Mike Pence would resolve on Jan. 6 in Trump’s favor.

But no state legislatures followed suit, and instead Eastman and his allies helped assemble a group of GOP party officials and activists to pose as presidential electors and submit signed certificates to Congress. Pence ultimately rejected the push, despite withering pressure from Trump and his associates.

Eastman had also asserted his Fifth Amendment rights when the House select committee investigating the Jan. 6 insurrection called him to testify last year. The panel’s investigators later revealed Eastman sought, but did not receive, a pardon in the aftermath of the Jan. 6 attack on the Capitol through Trump attorney Rudy Giuliani.

Willis has, in recent weeks, sought testimony from top figures in Trump’s orbit, including former White House and campaign hands Mark Meadows, Boris Epstheyn, Jenna Ellis and Rudy Giuliani. Willis told reporters in Atlanta on Monday that she had interviewed about 60 percent of the witnesses she intends to question and that she’s hopeful to wind down the probe by the end of the calendar year.

Willis has informed Giuliani that he is a target of her probe, along with the 16 Georgia Republicans who signed false elector certificates.

A spokesperson for the Fulton County district attorney’s office declined to comment.

Derivative Volumes of Ether Surpass Bitcoin Ahead of Merge; Here’s Why

White House to Jim Jordan, James Comer: Sorry, but you have to restart your oversight requests

What to know about DOE’s fusion milestone